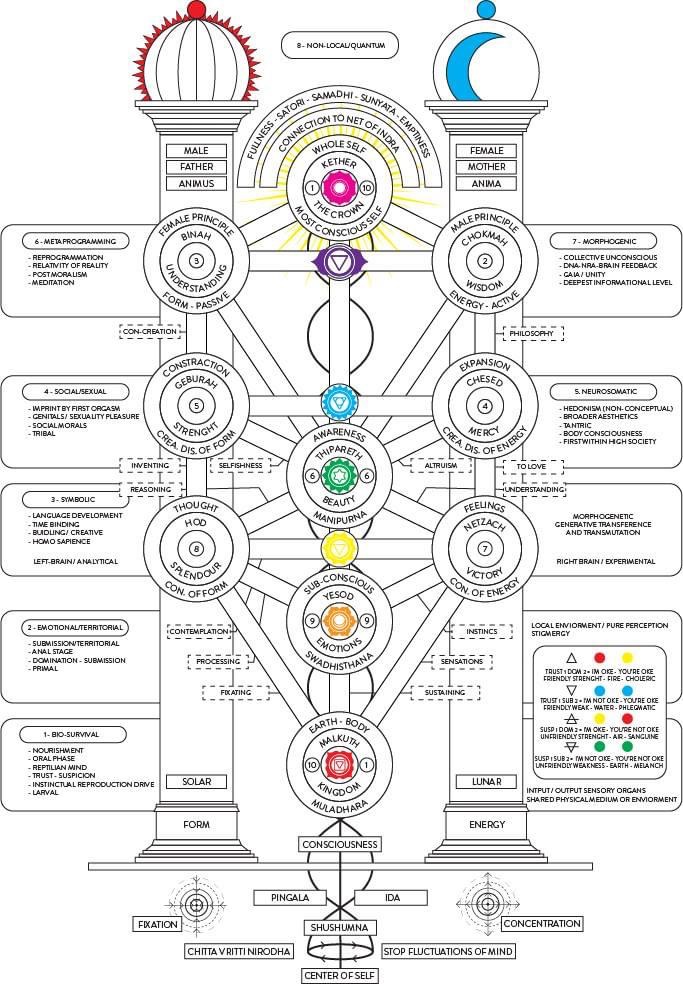 In Info-Psychology Timothy Leary presents a neurogenetic cosmology — a theory of the origin, evolution and destiny of life on and off this planet.

This cosmology suggests that Higher Intelligence, located in interstellar quantum information structures, has already sent a message to this planet. The U.F.O. message is in the form of the DNA code and of electro-atomic signals which can be transceived by the nervous system.

Life, a multi-billion year old unbroken info-wire of evolving intelligence is the message. Directed panspermia. Life was seeded on this womb-planet in the form of amino-acid templates designed to be activated by solar radiation and to unfold in a series of genetic molts and metamorphoses.

It is useful to define eight evolutionary phases which probably unfold on all oxygenated womb planets in the galaxy.

Let the first four phases concern the adaptation of the collectives (gene-pools) to the Newtonian characteristics of the womb-planet. Designed for fetal survival attached to the earth surface.

During the four later phases individuals decode, integrate and adapt to the Einsteinian electro-atomic-gravitational forces operating in post-terrestrial info-space.

The first four phases are muscular mechanical and define tiny survival “island realities” to which gene-pools are attached.

During the four post-larval phases individuals navigate life off this planet.

The biological “master plan” of organic evolution located in DNA directs the unfolding of the circuits of the nervous system.

One major goal of life is for the individual to become Increasingly Intelligent (I2) in order to decode somatic signals within the body, within the nervous system itself, signals from the DNA code and metaphysiological neuro-atomic energy patterns.

The history of life and of humanity is best defined in terms of the evolution of the nervous system and of knowledge technologies. In place of anthropological categories based on geography (Java Man), adaptive behavior (Neolithic Man), we suggest the following periods of neural evolution. Each period is considered as larval or robot to the subsequent.

Each life form on this planet is an alien immigrant from outer space. We are all Unidentified Flying Organisms.

Cosmology is traditionally considered a “far out” risky enterprise, inevitably involving the sort of speculation that makes people uneasy. There is, indeed, a taboo censoring teleological discussions. This future-terror (Neophobia) often leads to inquisitorial repression. Bruno was burned at the stake for persisting in cosmological broadcasts, for raising embarrassing futique questions. In his essay On the Infinite Universe and the Worlds Bruno presents this probing dialogue:

Elpino: How is it possible that the universe be infinite?

Philotheo: How is it possible that the universe be finite?

Elpino: How do you claim that you can demonstrate this infinitude?

Philotheo: Do you claim that you ran demonstrate this finitude?

Elpino: What is this spreading forth?

Philotheo: What is this limit?

The creative cosmologist presents his theory and then asks the critic to explicate his own. And here is the tender point. Although every larval bases Hir life on an implicit cosmology (usually vague dogmas imprinted on the childhood nervous system) most practical people are reluctant to verbalize their basic beliefs, because they do not stand the scrutiny of rational view and scientific perspective:

A dreadful malaise has demoralized the modern world. Spenglerian doom. This crisis is not political, ecological, energetic or economic. It is philosophic. Pre-partum depression. Technological, economic and political conferences are inevitably pessimistic because they avoid the real issues, the gyroscopic-navigational questions: Why are we here and where are we going?

Cosmological questions about origins are intimately linked to theories of destinations.

Speculations about the origin of life provide the foundation (conscious or unconscious) of every human culture. Inevitably questions about

Who did it and why?

lead to answers about how we can get to where we are supposed to go. If Allah did it, then we are en route to Allah. If no one did it then we are going nowhere.

Since each of the eight circuits of the nervous system produces its own reality, each imprint naturally provides its own answers limited to the imprint.

Circuit 1, for example, defines the goal of life in viscerotonic, vegetative, cellular survival terms — to eat, drink, breathe, avoid pain, danger and cold. And so it goes for the other larval levels of reality.

At this critical time in history there are two broad approaches to the questions of Why? Where from? Where to? and By whom?

The “issue” is complicated by the fact that science and theology are inextricably linked and that many scientific evolutionists are closet creationists.

The currently orthodox “scientific” theory of evolution holds that all plants and animals have developed from inorganic molecules, stewing in the Pre-Cambrian slime, sparked into life by electro-magnetic processes three billion years ago; that chance and natural selection working slowly but relentlessly with nucleic acid chains have produced the variety and complexity of biological life. Most evolutionists believe that all life forms derive from a common origin because of the amazing similarity of DNA among species and because of the apparent continuity of phylogenetic and individual development.

Evolutionists who propose this “chance-slime” theory tend to be atheistic, scientific, skeptical and pessimistic about the existence of human-type life on other planets. They tend to remain silent about the possible existence of Higher Intelligence in the galaxy. G. G. Simpson, a leading evolutionary philosopher, has cited the statistical improbability of life evolving on other planets the way it has unfolded on earth. To strict statistical evolutionists the emergence of human-type life, even on this planet, is improbable, if not impossible.

Most evolutionists rely on chance as the determining factor and attribute the apparent ascendency of humanity upon the fortuitous accidental emergence of the unique nervous system.

Creationists vary in kind and species as widely as do evolutionists, but in general they believe that at some early period of history distinct species were separately created by a Higher Intelligence called Yahweh, Jehovah, God, Allah, u.s.w.

Many creationists rely upon the biblical Genesis which states that God created the various kinds of animals, that “man” was created separately and “women” as an after-thought.

Sophisticated forms of Creationism have been produced by scientists such as Carolus Linnaeus, the Father of Taxonomy, who claimed, “there are just so many species as there were forms created in the beginning.” Lows Agassiz, a Harvard biologist, declared that the Creator designed the living forms we now witness.

A basic difference between these two points of view is this:

Evolutionists believe that the complex variety came from the simple.

Creationists believe that the complexity and variety were designed from the origin.

Evolutionists also tend to believe in the “accidental,” chance nature of the process and to avoid the notion of a pre-destined design or designing intelligence.

Creationists have tended to be orthodox religionists who personalize the Divine Creator and tend to place humanity on the apex of terrestrial life — usually allowing for a post-mortem, post-biological existence for chosen believers. Some theologies provide for extra-terrestrial, metaphysiological entities-demons, angels, devils, Saints. An unbridgeable gulf has developed between theological creationists and scientific evolutionists who can find no evidence for the celestial fantasies and wishful immortalities of the former.

It is interesting that few, if any, thinkers from either camp have emphasized the possibility of evolution continuing or speculated in any detail on the specific forms that the future may provide. The existence of Advanced Forms of Intelligence on other planets or in humanity’s future is particularly embarrassing to scientists who have, perhaps, been scared-off by the celestial absurdities of religious orthodoxies.

Exo-psychology presumes to offer new solutions to these classic questions by suggesting:

Exo-psychology attempts to assemble evidence from all the sciences, to pay respectful attention to the enduring myths which bubble up from the nervous systems of the past — and to make practical extrapolations from both sources of data to anticipate the future.

It is thus possible to entertain a Creative-Evolutionism which holds that the original amino-acid templates had built into their design:

It is not necessary to accept “directed panspermia” to assume this exo-psychological point-of-view. The most conservative scientific logic leads to the future probability of:

Science fiction has developed into a popular form of literature. The best of Sci-Fi becomes Psi-Phy, the Psychology of Physics. Television and movies also reflect a growing interest in the mutated future. It is of interest, however, that few science-fiction writers are capable of imagining Higher Intelligence. This inability to Specify a harmonious and successful future is due to the nature of the nervous system. Caterpillars cannot write with convincing reality about post-larval life.

Since the “head revolution” of the 1960’s, the basic principles of neuro-logic and reality-change have been widely accepted. While the terms imprinting, serial-imprinting and re-imprinting are not often used, there is growing “hip” acceptance of the notion that each nervous system creates its own reality. The vulgar, even cynical, reaction to this ontological discovery is to smile tolerantly and say, “Everyone is crazy in their own way.” “Do your own thing.” “Don’t lay your trip on me.”

The next neurological step is to accept the responsibility and say, “Since our imprints create reality, let us choose realities which are as fantastic and thrilling as possible. Almost anything we can conceive, we can make real.”

If exo-psychology can imagine human intelligence expanding to extra-terrestrial dimensions, is it not neurologically possible to realize these challenging possibilities? If we can imagine directed panspermia, then it can exist. Indeed, we can do it ourselves. If Higher Intelligence has not seeded space, then there is no reason why we cannot do it. Agriculture is, after all, “directed spermia.”

Here the polarities of the Evolutionists and Creationists can be harmonized. Our geneticists can help humanity become the Creator of Species, on this planet and, via interstellar migration, in space.

Humans have always created God in their own image. Neurogenetics now makes it possible for humanity:

If a credible, respectable God does not exist, let us, by all means, invent Hir. We do need someone to talk to.

At the present time, these are simply educated speculations about the future. But it does seem probable that our micro-hopes and tele-hopes can create the realities to come.

§ Note1. In place of the word “intelligence” Info-Exo-Psychology prefers the word “contelligence” referring to the reception (consciousness), integration and transmission of energy signals. There are eight levels of contelligence.