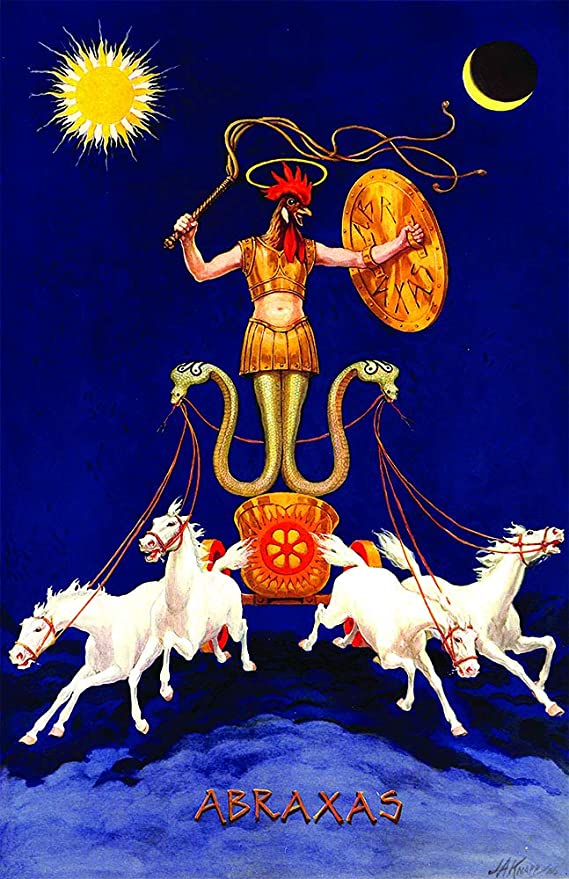 Abraxas (Greek: ΑΒΡΑΞΑΣ, variant form Abrasax, ΑΒΡΑΣΑΞ) is a word of mystic meaning in the system of the Gnostic Basilides, being there applied to the “Great Archon” (Gk., megas archōn), the princeps of the 365 spheres (Gk., ouranoi).[1] The word is found in Gnostic texts such as the Holy Book of the Great Invisible Spirit, and also appears in the Greek Magical Papyri. It was engraved on certain antique gemstones, called on that account Abraxas stones, which were used as amulets or charms. As the initial spelling on stones was “Abrasax” (Αβρασαξ), the spelling of “Abraxas” seen today probably originates in the confusion made between the Greek letters sigma (Σ) and xi (Ξ) in the Latin transliteration.

The seven letters spelling its name may represent each of the seven classic planets. The word may be related to Abracadabra, although other explanations exist.

There are similarities and differences between such figures in reports about Basilides’s teaching, ancient Gnostic texts, the larger Greco-Roman magical traditions, and modern magical and esoteric writings. Speculations have proliferated on Abraxas in recent centuries, who has been claimed to be both an Egyptian god and a demon.[2]

Powers of the universe were divided into 365 Æons, or spiritual cycles, and that the sum of all these together was the Supreme Father, and to Him he gave the Qabbalistical appellation Abraxas, as being symbolical, numerologically, of His divine powers, attributes, and emanations. Abraxas is usually symbolized as a composite creature, with the body of a human being and the head of a rooster, and with each of his legs ending in a serpent. C. W. King, in his Gnostics and Their Remains, gives the following concise description of the Gnostic philosophy of Basilides, quoting from the writings of the early Christian bishop and martyr, St. Irenæus: “He asserted that God, the uncreated, eternal Father, had first brought forth Nous, or Mind; this the Logos, Word; this again Phronesis, Intelligence; from Phronesis sprung Sophia, Wisdom, and Dynamis, Strength.” In describing Abraxas, C. W. King says:

“Bellermann considers the composite image, inscribed with the actual name Abraxas, to be a Gnostic Pantheos, representing the Supreme Being, with the Five Emanations marked out by appropriate symbols. From the human body, the usual form assigned to the Deity, spring the two supporters, Nous and Logos, expressed in the serpents, symbols of the inner senses, and the quickening understanding; on which account the Greeks had made the serpent the attribute of Pallas. His head–that of a cock–represents Phronesis, that bird being the emblem of foresight and of vigilance. His two arms hold the symbols of Sophia and Dynamis: the shield of Wisdom and the whip of Power.”

The Gnostics were divided in their opinions concerning the Demiurgus, or creator of the lower worlds. He established the terrestrial universe with the aid of six sons, or emanations (possibly the planetary Angels) which He formed out of, and yet within, Himself. As stated before, the Demiurgus was individualized as the lowest creation out of the substance called pleroma. One group of the Gnostics was of the opinion that the Demiurgus was the cause of all misery and was an evil creature, who by building this lower world had separated the souls of men from truth by encasing them in mortal vehicles. The other sect viewed the Demiurgus as being divinely inspired and merely fulfilling the dictates of the invisible Lord. Some Gnostics were of the opinion that the Jewish God, Jehovah, was the Demiurgus. This concept, under a slightly different name, apparently influenced mediæval Rosicrucianism, which viewed Jehovah as the Lord of the material universe rather than as the Supreme Deity. Mythology abounds with the stories of gods who partook of both celestial and terrestrial natures. Odin, of Scandinavia, is a good example of a deity subject to mortality, bowing before the laws of Nature and yet being, in certain senses at least, a Supreme Deity[3].

The occult property of the Gnostic pantheos Abraxas is significant. Abraxas in Greek is αμπραξας  :  Α = 1, β = 2, ρ = 100, α = 1, ξ =60, α = 1, ς = 200, the sum being 365, the number of days in the year. This number furnishes the key to the mystery of Abraxas, who is symbolic of the 365 Æons, or Spirits of the Days, gathered together in one composite personality. Abraxas is symbolic of five creatures, and as the circle of the year actually consists of 360 degrees, each of the emanating deities is one-fifth of this power, or 72, one of the most sacred numbers in the Old Testament of the Jews and in their Qabbalistic system. This same method is used in finding the numerical value of the names of the gods and goddesses of the Greeks and Jews [3].