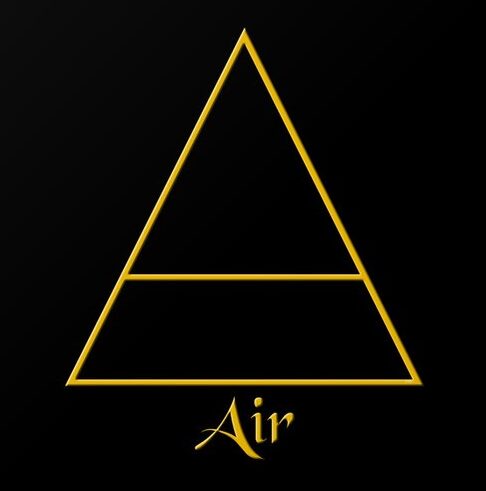 The elemental weapon of air is the dagger which must be painted yellow with magical names and sigils written upon it in violet. Each of the elements has several associated spiritual beings. The archangel of air is Raphael, the angel is Chassan, the ruler is Aral, the king is Paralda, and the air elementals (following Paracelsus) are called sylphs. Air is considerable and it is referred to the upper left point of the pentagram in the Supreme Invoking Ritual of the Pentagram. Many of these associations have since spread throughout the occult community.[1]

In the Golden Dawn and many other magical systems, each element is associated with one of the cardinal points and is placed under the care of guardian Watchtowers. The Watchtowers derive from the Enochian system of magic founded by Dee. In the Golden Dawn, they are represented by the Enochian elemental tablets.[2] Air is associated with the east, which is guarded by the First Watchtower.

Air is one of the five elements that appear in most Wiccan and Pagan traditions. Wicca in particular was influenced by the Golden Dawn system of magic and Aleister Crowley’s mysticism.[3]