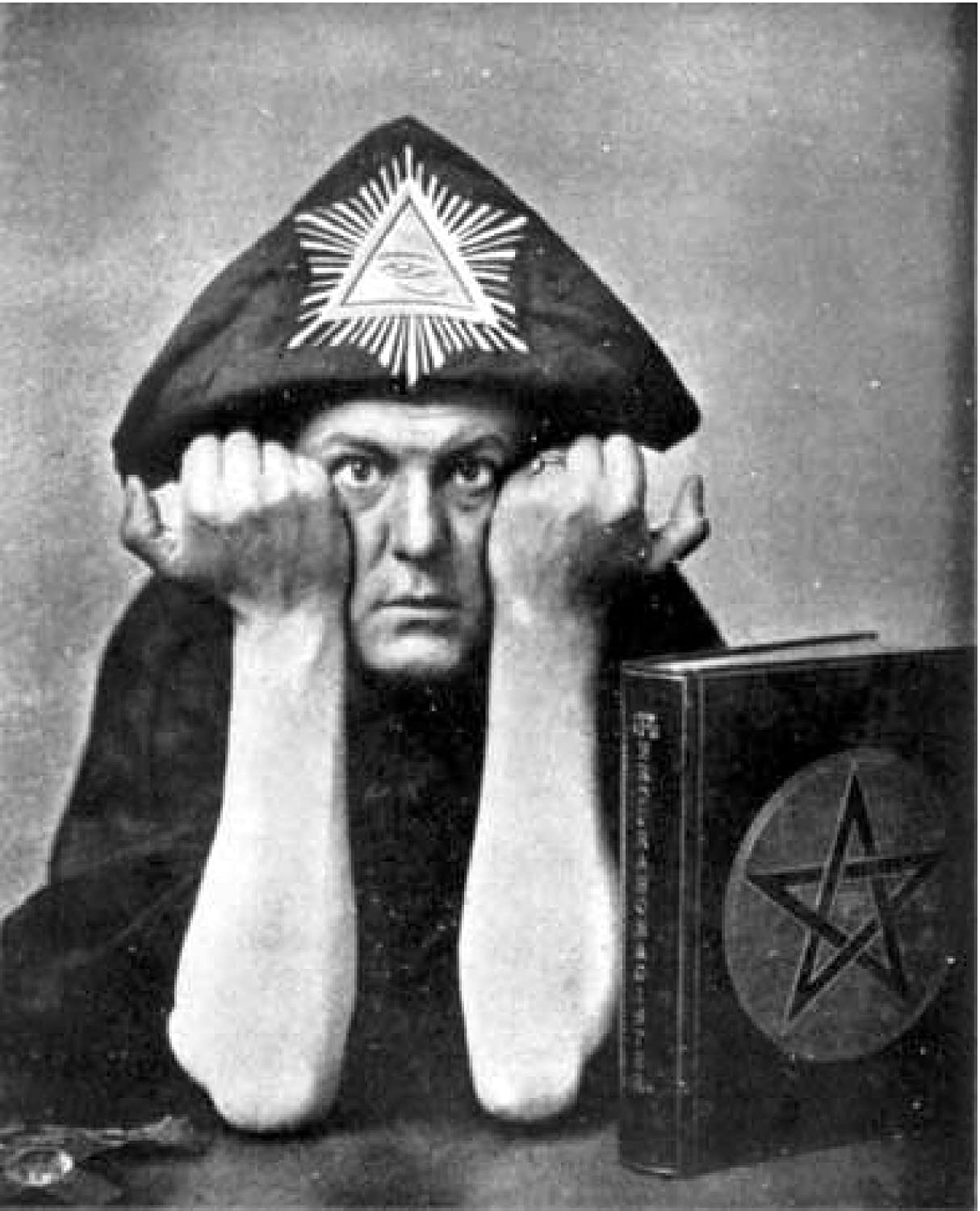 Aleister Crowley (Oct. 12, 1875-Dec. 1, 1947) — however one judges him — was a fascinating man who lived an amazing life. He is best known as being an infamous occultist and the scribe of The Book of the Law, which introduced Thelema to the world. Crowley was an influential member in several occult organizations, including the Golden Dawn, the A.’.A.’., and Ordo Templi Orientis. He was a prolific writer and poet, a world traveler, mountaineer, chess master, artist, yogi, social provocateur, drug addict and sexual libertine. The press loved to demonize him and dubbed Crowley “The wickedest man in the world.”

A History of his life

Edward Alexander Crowley was born in Leamington Spa, Warwickshire on October 12, 1875. His parents were members of the Plymouth Brethren, an extremely devout Christian sect. It was in this Christian childhood that he came to refer to himself as The Beast 666. He was also fortunate to be heir to a small brewing fortune, which he largely used for travel and publishing his works over his lifetime.

He entered Trinity College at Cambridge in 1895, and left just before finishing his degree. He was initiated into the Hermetic Order of the Golden Dawn in 1898. The next year he purchased Boleskine House at Loch Ness in order to perform the ritual known as the Abra-Melin Operation.

In 1900 Crowley traveled to Mexico where he was initiated as a 33° Mason.

In 1902 he began the practice of yoga in Ceylon with Allan Bennett, an associate from the Golden Dawn. He returned to Boleskine in 1903 and married Edith Rose Kelly, the sister of the painter Sir Gerald Kelly. On their honeymoon, they visited Cairo, Egypt in 1904. It is here that he came to write The Book of the Law on April 8, 9, and 10.

In 1907 Crowley founded the Order he called the A.’.A.’. Two years later, he divorced Rose and traveled to the Sahara Desert with poet Victor Neuberg, where they performed a series of rituals that resulted in the book The Vision and the Voice.

In 1913 Crowley was initiated into Ordo Templi Orientis by Theodor Reuss. The following year Crowley was advanced to the X° and became head of O.T.O. in Great Britain and Ireland. That same year, while on a trip to Moscow, he wrote the Gnostic Mass.

With the beginning of WWI, Crowley retired to America in 1914, where he began editing the publication The International. He returned to Europe in 1919. The next year he founded the Abbey of Thelema in Cefalú, Sicily — an experimental commune based on the principles of Thelema and inspired by the works of Rabelais. He was expelled from Italy by Mussolini in 1923. During his time at Cefalú, in 1922, Crowley proclaimed himself Outer Head of the Order of O.T.O.

In 1929 Crowley took his second wife, Maria de Miramar — a native of Nicaragua — although she eventually succumbed to mental delusions and died in an institution three decades later.

By 1935, largely because of his lifelong self-publishing efforts and a lost libel suit, Crowley had lost his personal fortune and settled into bankruptcy. For the next decade he kept himself afloat through publishing and occasional help from associates and students. His final years were characterized by poor health and heroin addiction alongside a continued zeal for promulgating Thelema. In 1945, he retired to Netherwood, a boarding house in Hastings, England. On December 1, 1947, at the age of 71, and with his son Ataturk by his bed, Aleister Crowley good-spiritedly and quietly celebrated his Greater Feast. His ashes were later buried next to a tree in Hampton, New Jersey on the property of Karl Germer (Crowley’s successor to OHO).

Perhaps Crowley’s most significant contribution was bringing Thelema into the world with the reception of The Book of the Law on April 8, 9, and 10, 1904. The writing occurred in Cairo, Egypt, where Crowley and his new wife, Rose were honeymooning. On March 16, Crowley had attempted a ritual to show his wife elemental beings called Sylphs. Although she didn’t see them, she apparently did begin to channel a series message to Crowley over the next few days regarding Horus and “a child.” Crowley is highly skeptical and questions the veracity of the message, finally becoming satisfied when Rose pointed out Horus to him on a funerary tablet in the Bulaq Museum (labeled “Stele 666” and eventually becoming known as the Stele of Revealing). These events culminate in the actual three days of writing, each of which took place at noon in a chamber of their flat which was used as a temple. (See: Reception of Liber Legis)

Initially, Crowley rejected this document. He writes of himself in Magick (p.444):

[Crowley], to whom this revelation was made with so many signs and wonders, was himself unconvinced. He struggled against it for years. Not until the completion of His own initiation at the end of I909 did he understand how perfectly he was bound to carry out this work. Again and again He turned away from it, took it up for a few days or hours, then laid it aside. He even attempted to destroy its value, to nullify the result.
And

I have fought this Book and fled it; I have defiled it and I have suffered for its sake.
Yet, after his acceptance of Liber Legis, Crowley was a tireless advocate of its teachings (as he interpreted them) and labored for the rest of his life to promulgate the Law of Thelema. He founded the A.’.A.’. in 1907 and he adapted the initiations rituals of Ordo Templi Orientis, both of which were largely based on the principles of Thelema. He wrote countless letters, essays, and epistles regarding Thelema, including The Message of the Master Therion, De Lege Libellum, and The Law of Liberty; and he wrote The Gnostic Mass in 1911 based on Liber AL as well.

Crowley was convinced of the objective truth of Liber Legis, and that its speaker, Aiwass, was both his Holy Guardian Angel and in possession of knowledge completely unavailable to Crowley. He writes in Magick: “Man has no such fact recorded, by proof established in surety beyond cavil of critic, as this Book, to witness the existence of and Intelligence praeterhuman and articulate, purposefully interfering in the philosophy, religion, ethics, economics and politics of the Planet.” This knowledge, as Crowley understood it, represented the formula of an entire age of mankind, which he referred to as the Aeon of Horus, the Word of which is Thelema, which had been ushered in by himself as its prophet.

Thelemites today hold a wide spectrum of beliefs regarding Crowley’s status as prophet. Some view Crowley as he did himself—the literal messenger of a new spiritual Law for mankind. Others believe that “Aiwass” was simply an unconscious (or even fraudulent pseudonym) of Crowley, and that the merit of the Book rests solely on its content without need for objective verification. Yet others disregard Crowley altogether. However, it is reasonable to say that Crowley still plays a very large role in the understanding of Thelema, and his words are constantly used to promulgate its doctrines today.

Most of Crowley’s most influential work was in the form of “Libers” (lit. “books”), which were usually shorter items consisting of core teachings, methodologies, practices, or Thelemic scripture. All the libers are given a number in the Greek numbering system, and those that are part of the A.’.A.’. curriculum are assigned a “class” as follows:

Many of his Libers appeared in published books, especially editions of The Equinox and The Holy Books of Thelema, although some Libers are books in their own right (such as Magick, which is Liber 4).