From Here to Alternity and Beyond 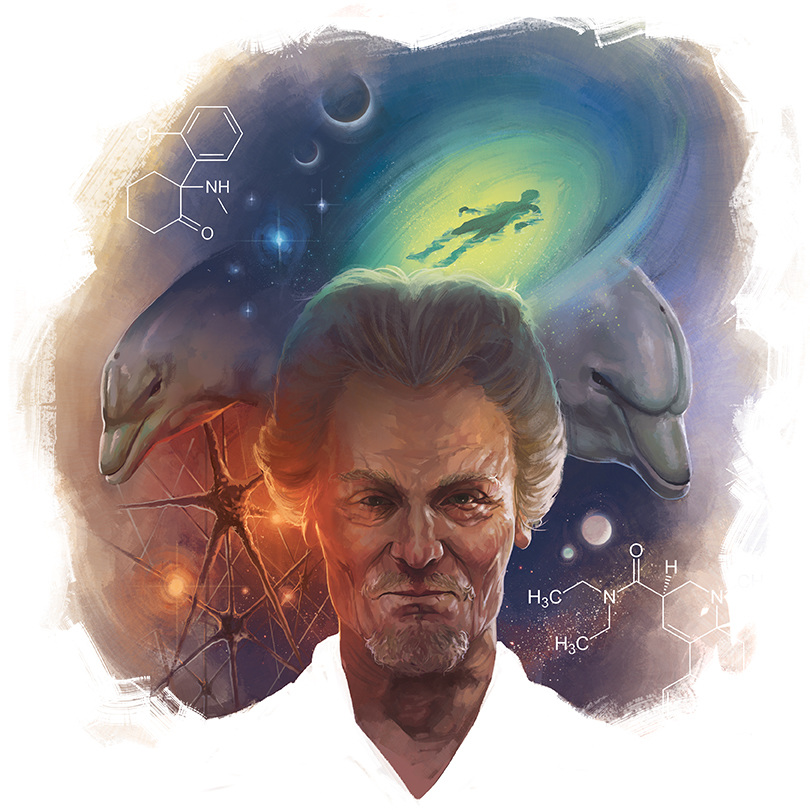 From Here to Alternity and Beyond

“The explanatory principle will save you from the fear of the unknown. I prefer the unknown…” John C. Lilly How does one briefly describe a man as complex as John Lilly? Whole books barely provide an overview of this man’s extraordinary existence, amazing accomplishments, and contributions to the world. His list of scientific achievements covers a full page In Who’s Who in America. John C. Lilly, M.D. is perhaps best known as the man behind the fictional scientists dramatized in the films Altered states and The Day of the Dolphin. He pioneered the original neuroscientific work In electrical brain stimulation, mapping out the pleasure and pain pathways in the brain. He frontiered work in inter-species communication research with dolphins and whales. He invented the isolation tank and did significant research in the area of sensory deprivation. Educated at CalTech, Dartmouth Medical School, and the University of Pennsylvania, he did a large part of his scientific research at the National Institute of Mental Health and built his own dolphin-communication research lab in St. Thomas in the Virgin Islands. After experimenting with LSD in the sensory deprivation flotation tank, he left the academic world in pursuit of ever higher states of consciousness. From the Esalen Institute to Chile to ketamine-induced extraterrestrial contacts in other realities, this man’s life is more farout than any science fiction. Always following the scientific tradition that carved his name into history, John Lilly systematically and courageously explored the states of consciousness produced by LSD and ketamine while in the isolation tank. His autobiographies The Center of the Cyclone, The Dyadic Cyclone (with Toni Lilly), and The Scientist, provide mind-boggling overviews of his amazing adventure of a life. His philosophy on how to reprogram one’s own brain is best summarized in Programming and Metaprogramming the Human Biocomputer, and Simulations of God. Rebecca McClen and I interviewed John at his house in Malibu on the night of February 16, 1991. It was a magically enchanting evening. John was like a Zen master, with sparkling extraterrestrial eyes, in top form, more brilliant than ever at 76, laughing, creating and bursting realities like soap bubbles. John is very direct and ruthlessly compassionate, more knowledgeable than a library of encyclopedias yet as innocent and curious as a small child. The interview lasted over four hours. John spoke enthusiastically to us about how his early scientific research influenced his latter explorations in consciousness, from dolphins to extraterrestrials. He spoke to us about the distinction between insanity and outsanity, and about ECCO– the Earth Coincidence Control Office. We discussed and shared our ketamine experiences together. He discussed his ideas about how ketamine makes the brain sensitive to micro-waves, so that it can directly pick up television and radio signals. From electrical brain stimulation to interspecies communication to sensory deprivation to psychedelic exploration, John Lilly is a pure delight to be around.

DJB: John, what was it that originally inspired your interest in neuroscience and the nature of reality?

JOHN: At age sixteen, in my prep school, I wrote an article for the school paper called “Reality,” and that laid out the trip for the rest of my life–thought versus brain activity and brain structure. I went to CalTech to study the biological sciences, and there I took my first course in neuroanatomy. Later I went on to Dartmouth Medical School where I took another course in neuroanatomy, and at the University of Pennsylvania I studied the brain even further. So I learned more about the brain than I can tell you.

RMN: In what ways do you think your Catholic background influenced your mystical experiences?

JOHN: At Catholic school I learned about tough boys and beautiful girls. I fell in love with Margaret Vance, never told her, though, and it was incredible. I didn’t understand about sex so I visualized exchanging urine with her. My father had one of these exercise machines with a belt worn around your belly or rump and a powerful electric motor to make the belt vibrate. I was on this machine and all the vibration stimulated my erogenous zones. Suddenly my body fell apart and my whole being was enraptured. It was incredible. I went to confession the following morning and the priest said, “Do you jack off!.” I didn’t know what he meant, then suddenly I did and I said, “No.” He called it a mortal sin. I left the church thinking, “If they’re going to call a gift from God a mortal sin, then to hell with them. That isn’t my God, they’re just trying to control people.”

RMN: What is your personal understanding of God? JOHN: When I was Seven years old I had a vision alone in a Catholic church. Suddenly I saw God on his throne: an old man with a white beard and white hair surrounded by angels and the saints parading around with a lot of music. I made the mistake of asking a nun about the vision and she said, “Only saints have visions!” I assumed that she thought I wasn’t a saint. So I kept that memory, and on my first acid trip I relived it completely to Beethoven’s Ninth Symphony. And suddenly I realized that the little boy had constructed this to explain the experience he had. I realized that one has to project onto an experience if one is going to talk about it because the experience itself can’t be said in words. But if you are going to talk about it you choose words which you feel are most appropriate. I understood that, as a seven year old I had done that. I saw an old man with white hair because the preprogramming was there. It wasn’t physiology; it was something inside, the inner reality.

RMN: Has your understanding or idea of God evolved over time as a result of your changing experiences?

JOHN: Well, when I started going out on the universe with LSD in the tank, I’d come to a certain group of entities and I’d say, “Are you God?” And they’d say, “Well, we say that to some people but God is way up there somewhere with the angels.” And it turned out no matter how big they were, God is bigger. So finally I got to the Starmaker. But as Olaf Stapledon says in his book, it’s impossible to describe the Starmaker in human terms. He was well aware of the bullshit of language. I call God ECCO now. The Earth Coincidence Control Office. It’s much more satisfying to call it that. A lot of people accept this and they don’t know that they’re just talking about God. I finally found a God that was big enough. As the astronomer said to the Minister, “My God’s astronomical.” The Minister said, “How can you relate to something so big?” The astronomer said, “Well, that isn’t the problem, your God’s too small!”

JOHN: Objectivity and subjectivity were traps that people fell into. I prefer the terms “insanity” and “outsanity.” Insanity is your life inside yourself. It’s very private and you don’t allow anybody in there because it’s so crazy. Every so often I find somebody that I can talk to about it. When you go into the isolation tank outsanity is gone. Now, outsanity is what