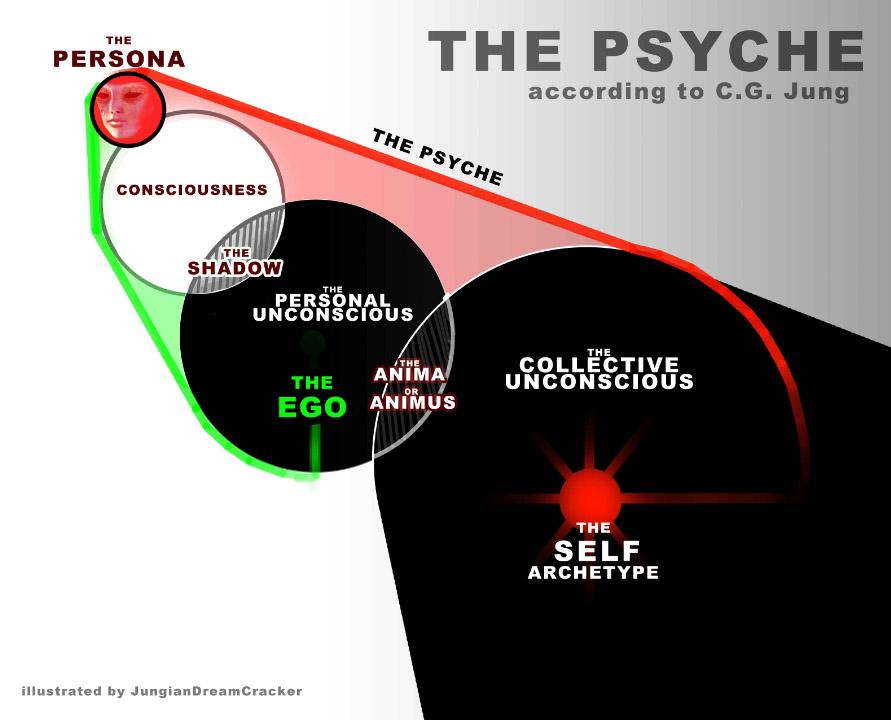 It can be identified as the totality of the unconscious feminine psychological qualities that a male possesses; or the masculine ones possessed by the female. The anima is an archetype of the collective unconscious and not an aggregate of a man’s mother, sisters, aunts, and teachers though these aspects of the personal unconscious can ‘contaminate’ the archetypes.

The anima is one of the most significant autonomous complexes of all. It manifests itself by appearing as figures in dreams as well as by influencing a man’s interactions with women and his attitudes toward them, and vice versa for females and the animus. Jung said that confronting one’s shadow self is an “apprentice-piece”, while confronting one’s anima is the masterpiece. Jung viewed the anima process as being one of the sources of creative ability.[2]

The Latin root of animus is cognate with Greek anemoi (wind), breath and Sanskrit aniti (he breathes). The root of these and a related cluster of concepts affirms the declaration of Thales: “Everything is full of gods.”

The word anima may come from the Proto-Indo-European language root *ane- (“to breathe”), from which animal and animation also originate.

Jung believed anima development has four distinct levels, which he named Eve, Helen, Mary, and Sophia. In broad terms, the entire process of anima development in a male is about the male subject opening up to emotionality, and in that way a broader spirituality, by creating a new conscious paradigm that includes intuitive processes, creativity and imagination, and psychic sensitivity towards himself and others where it might not have existed previously.

The first is Eve, named for the Genesis account of Adam and Eve. It deals with the emergence of a male’s object of desire, yet simultaneously generalizes all females as evil and powerless.

The second is Helen, in allusion to Helen of Troy in Greek mythology. In this phase, women are viewed as capable of worldly success and of being self-reliant, intelligent and insightful, even if not altogether virtuous. This second phase is meant to show a strong schism in external talents (cultivated business and conventional skills) with lacking internal qualities (inability for virtue, lacking faith or imagination).

The third phase is Mary, named for the Christian theological understanding of the Virgin Mary (Jesus’ mother). At this level, females can now seem to possess virtue by the perceiving male (even if in an esoteric and dogmatic way), insomuch as certain activities deemed consciously unvirtuous cannot be applied to her.

The fourth and final phase of anima development is Sophia, named for the Greek word for wisdom. Complete integration has now occurred, which allows females to be seen and related to as particular individuals who possess both positive and negative qualities. The most important aspect of this final level is that, as the personification “Wisdom” suggests, the anima is now developed enough that no single object can fully and permanently contain the images to which it is related.

Jung stated that there are four parallel levels of Animus development in a female, [2] but only named stage one and three of the animus individuation process: the athlete/muscleman/thug and the professor/cleric — “the planner” and “the guide” are used here for the convenience of the reader. For the former, due to Jung’s explanation that “[it] provides a woman with initiative and the capacity for planned action”; and the latter, by him noting that “[i]n mythology, this aspect of the animus appears as Hermes, messenger of the gods; in dreams he is a helpful guide.”

Also referred to as the thug or the muscleman, Jung described it as the embodiment of physical power.

This stage embodies the capacity for independence, planned action, and initiative.

Also referred to as the cleric, it embodies “the Word.”

Like “Sophia,” this is highest level of mediation between the unconscious and conscious mind

The four roles are not identical with genders reversed. Jung believed that while the anima tended to appear as a relatively singular female personality, the animus may consist of a conjunction of multiple male personalities: “in this way the unconscious symbolizes the fact that the animus represents a collective rather than a personal element”.[3]

The process of animus development deals with cultivating an independent and non-socially subjugated idea of self by embodying a deeper word (as per a specific existential outlook) and manifesting this word. To clarify, this does not mean that a female subject becomes more set in her ways (as this word is steeped in emotionality, subjectivity, and a dynamism just as a well-developed anima is) but that she is more internally aware of what she believes and feels, and is more capable of expressing these beliefs and feelings. Thus the “animus in his most developed form sometimes…make[s] her even more receptive than a man to new creative ideas”.[3] Both final stages of animus and anima development have dynamic qualities (related to the motion and flux of this continual developmental process), open-ended qualities (there is no static perfected ideal or manifestation of the quality in question), and pluralistic qualities (which transcend the need for a singular image, as any subject or object can contain multiple archetypes or even seemingly antithetical roles). They also form bridges to the next archetypal figures to emerge, as “the unconscious again changes its dominant character and appears in a new symbolic form, representing the Self”. [3]– the archetypes of the Wise Old Woman/Man.[3]

In his book The Middle Pillar, Isreal regardie explains the anima & animus concept and also elaborates its relationship with the kabbalistic tree of life:

“Again referring to the Chinese mystical text commented upon at length by Jung, we will see that according to the Chinese the whole of nature is permeated by two principles, one positive or masculine, the other negative or feminine. These are named the yang and the yin. These two principles are present in the human psyche, and looking at it from the widest possible point of view, we could assume that the conscious level of the mind is the yang, and the unconscious is the yin. But this division, because it is the widest generalization, is inadequate and is capable of further classification. Because within the mind there are both positive and negative elements, factors which are those of thought and feeling . This holds true also of the unconscious, and though we have referred this to the yin, with its sphere there is both a yang and a yin operation. If we refer to one of the deepest levels of the unconscious, then this yang and yin operation is what Jung means by the animus and anima and what the Qabalah indicates by Chiah and Neshamah. And in the diagram which is provided in The Secret of the Golden Flower to which Jung wrote an erudite and profound European commentary the placing of the psychic factor Tao is similar to the position of Yechidah upon the Qabalistic Tree of Life. “[4]

“Tao, animus, and anima, or Yechidah, Chiah, and Neshamah, constitute the innermost core of what we have chosen to call the psychic onion, the primordial principles operating in the deepest levels of the unconscious. It might be said that this is the level which is always in direct contact with the racial and universal levels of the collective unconscious-that dynamic and ubiquitous stream of life and vitality of which the Yechidah, together with its vehicles, comprise just one particular center of consciousness.”[4]

One pupil of Jung’s, Joan Corrie, the author of ABC of Jung’s Psychology, says the following:

“The anima is in contact with the objects of the inner reality-the images of the collective unconscious – as the persona is in contact with the objects of external reality. The anima is an archetypal figure that might almost be described as the precipitate of man’s age-long impressions of woman – not his conscious reasoned ideas, but the unconscious inherited mould into which she is cast.”

[1]. Anima & Animus, psychology.wikia.org. Accessed May 2020. [2]. The Invisible Partners: How the Male and Female in Each of Us Affects Our Relationships by John A. Sanford (Paperback – Jan 1, 1979) [3].M.-L. von Franz, “The Process of Individuation” in Carl Jung ed., Man and his Symbols (London 1978) p. 205-6 [4]. Regardie, Isreal. The Middle Pillar: The Balance Between Mind and Magic. Llewellyn Publications,U.S.
Tags:
Community
Community
Join the community