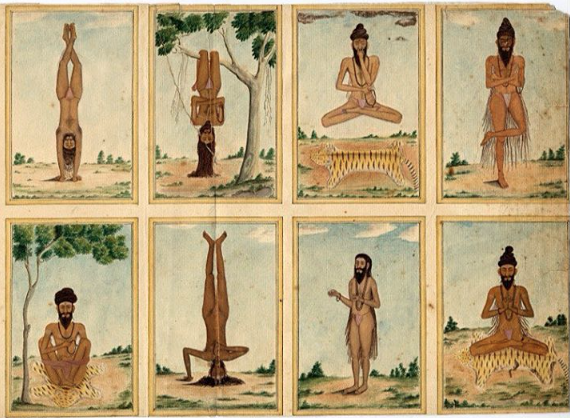 An asana is a body posture, originally and still a general term for a sitting meditation pose,[1] and later extended in hatha yoga and modern yoga as exercise, to any type of pose or position, adding reclining, standing, inverted, twisting, and balancing poses.

In the Yoga Sutra, Patanjali writes of asana as the third of the 8 limbs of classical yoga (Raja Yoga). These eight limbs are the yamas (obligations), niyamas (devotions), asanas (postures), pranayama (breath work), pratyahara (sense withdrawal or non-attachment), dharana (concentration), dhyana (meditation),samadhi (realization of the true self and/or unity with god),and Bodhitharta (enlightened over all).

Hints and Cautions for the Practice of Asanas [2]

The qualities demanded from an aspirant are discipline, faith, tenacity and perseverance to practice regularly without interruptions.

Before starting to practice asanas, the bladder should be emptied and the bowels evacuated. Topsy-turvy poses help bowel movements. I f the student is constipated or it is not possible to evacuate the bowels before

the practice of asanas, start with Sirsasana and Sarvangasana and their variations. Attempt other asanas only after evacuation. Never practice advanced asanas without having first evacuated the bowels.

Asanas come easier after taking a bath. After doing them, the body feels sticky due to perspiration and it is desirable to bathe some fifteen minutes later. Taking a bath or a shower both before and after practising asanas refreshes the body and mind.

Time
The best time to practise is either early in the morning or late in the evening. I n the morning asanas do not come easily as the body is stiff. The mind, however, is still fresh but its alertness and determination diminish as time goes by. The stiffness of the body is conquered by regular practice and one is able to do the asanas well. In the evening, the body moves more freely than in the mornings, and the asanas come better and with greater ease. Practice in the morning makes one work better in one’s vocation. In the evening it removes the fatigue of the day’s strain and makes one fresh and calm. Difficult asanas should, therefore, be done in the morning when one has more determination and, stimulative asanas (like Sirsasana, Sarvangasana and their variations and Paschimottanasana) should be practised in the evening.

Do not practise asanas after being out in the hot sun for several hours.

They should be done in a clean airy place, free from insects and noise. 9· Do not do them on the bare floor or on an uneven place, but on a folded blanket laid on a level floor.

No undue strain should be felt in the facial muscles, ears and eyes or in breathing during the practice.

During the practice of asanas, it is the body alone which should be active while the brain should remain passive, watchful and alert. If they are done with the brain, then you will not be able to see your own mistakes.

In all the asanas, the breathing should be done through the nostrils only and not through the mouth.

Do not restrain the breath while in the process of the asana or while staying in it.

13. After completing the practice of asanas always lie down in Shavasana for at least IO to I5 minutes, as this will remove fatigue.Upavistha Konasana, Baddha Konasana,

Avoid Asanas during menstrual period . But if the flow is in excess of normal, Upavistha Konasana, Baddha Konasana, Virasana,  V1rasana, Janu S1rsasana, Paschimottanasana and Uttanasana may be performed with beneficial effect. On no account stand on your head during the menstrual period.

All the asanas can be practised during the first three months of pregnancy. All the standing poses and the forward bending asanas may be done with mild movements, for at this time the spine should be made strong and elastic and no pressure should be felt on the abdomen. Baddha Konasana and Upavistha Konasana may be practiced through­ out pregnancy at any time of the day (even after meals, but not forward bending immediately after meals) as these two asanas will strengthen the pelvic muscles and the small of the back and also reduce labour pains considerably . Pranayama without retention (Kumbhaka) may be practiced throughout pregnancy, as regular deep breathing will help considerably during labour.

No asanas should be done during the first month after delivery. Thereafter they may be practiced mildly.

Faulty practice causes discomfort and uneasiness within a few days. This is sufficient to show that one is going wrong. If you cannot correct the fault for yourself, it is better to approach a person who has practiced well and get his guidance.

The right method of doing asanas brings lightness and an exhilarat­ing feeling in the body as well as in the mind and a feeling of oneness of body, mind and soul.

Continuous practice will change the outlook of the practitioner. (S)He will discipline himself in food, sex, cleanliness and character and will become a new man.

When one has mastered an asana, it comes with effortless ease and causes no discomfort. The bodily. movements become graceful. While performing asanas, the student’s body assumes numerous forms of life found in creation- from the lowliest insect to the most perfect sage- and he learns that in all these there breathes the same Universal Spirit – the Spirit of God. He looks within himself while practicing and feels the presence of God in different asanas which he does with a sense of sur­render unto the feet of the LORD.

The majority of the following asanas are being demonstrated in his video lecture: