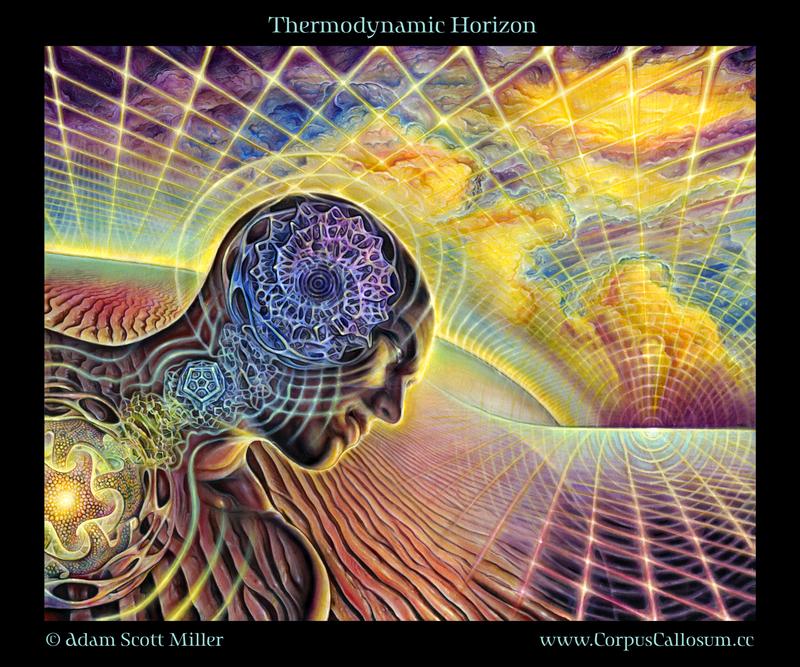 An altered state of consciousness (ASC),[1] also called an altered state of mind, is any condition that is significantly different from a normal waking beta wave state. The expression was used as early as 1966 by Arnold M. Ludwig[2] and brought into common usage from 1969 by Charles Tart. It describes induced changes in one’s mental state, almost always temporary. A synonymous phrase is “altered state of awareness”.[3]

William James wrote about the stream of consciousness; the contents of which he described as continuous, personal, changing, and selective. Sigmund Freud focused on what he believed to be occurring below this stream of conscious activity, the unconscious. Each scholar concentrated on different levels of awareness to the external and internal stimuli that characterize our existence, our sense of self. Consciousness is clearly not an all-or-none phenomenon. Levels of awareness vary across a continuum ranging from alert and focused conscious activity (engaged as we attend to a challenging topic of interest) to the negligible awareness associated with sleep, anesthesia, or even coma. Somewhere in between are the moments, we turn on the “automatic pilot” inside, such as when driving a familiar route. These varying states of consciousness are associated with changes in brain electrical activity. In 1929, Hans Berger invented the technique called electroencephalography (EEG), which allows us to measure this changing electrical activity using electrodes secured to the scalp. EEG measures and amplifies the sum of electrical activity generated by action potentials and graded synaptic potentials of neurons located in the cerebral cortex. The summary of this activity is recorded finally as brain waves (or traces) of varying amplitude (height) and frequency (cycles per second, cps). Human brain waves are typically divided into four principle bands based on frequency. These bands are identified by Greek letters and are beta (17-24 cps), alpha (8-16 cps), theta (4-7 cps), and delta (under 4 cps).[4]

History of utilization of ASCs

Terence McKenna has suggested that the use of psychedelic mushrooms in prehistoric times has led to the “evolution of human language and symbol use“. Some theorists propose that mind-altering substances, such as Soma, might have pushed the formation of some of the world’s main religions.

Meditation in its various forms is being rediscovered by modern psychology because of its therapeutic potential and its ability to “enable the activity of the mind to settle down”. In Psychotherapy techniques like hypnosis, meditation, support psychological processes. [6]

Classification of altered states of consciousness

A classification with five categories was suggested by Vaitl [7] to distinguish ASCs according to how they were induced:

To elaborate more on some of above categories, it is worth mentioning the following methods of inducing altered states of consciousness.

The typical core elements of near-death experiences include (a) a feeling of peacefulness and well-being, (b) a separation from the body (out-of-body experience), (c) a dark tunnel experience, (d) a brilliant light associated with mystical feelings of love and union, and (e) a heavenly landscape (often relatives, religious figures, or beings of light appear and finally initiate the return to the body). Other elements are the hearing of music, a slowing of time and speeding of thoughts, and a panoramic life review. The incidence of near-death experiences is estimated to lie between 10% and 50% of all near-death situations and is independent of gender, age, and profession. The circumstances of the close brush with death (e.g., from illness, accident, suicide, or anesthetics) have only a minor influence on the occurrence and features of the near-death experiences. This invariance suggests a specific neurophysiological mechanism taking place in the dying brain. Accordingly, several hypotheses have been formulated regarding the neurophysiological processes (DMT production in pineal gland, cerebral anoxia, depletion of neurotransmitter reservoirs, release of endorphins, general disinhibition of the brain) and structures (limbic system, septohippocampal formation, temporal lobes, visual cortex) that have been involved in the generation of near-death experiences. Because no experiments can be performed to induce real near-death experiences, the neurophysiological explanatory models are mainly based on speculations and analogue experiments that produce ASC with features similar to those observed during near-death experiences, such as a body acceleration reducing the cerebral blood supply until a loss of consciousness occurs; the administration of drugs, like ketamine; or the electromagnetic stimulation of the temporal lobes. [8]

Daydreaming refers to spontaneous, subjective experiences in a no-task, no-stimulus, no-response situation (see also the sections on hypnagogic states and sensory deprivation). Daydreaming also includes unintended thoughts that intrude inadvertently into the execution of intended mental tasks and undirected ideas in thought sampling during wakefulness. Daydreaming clearly differs from reality-focusing mentation, and several characteristics of daydreaming strongly differ from those of rapid eye movement (REM) dreams; for example, daydreaming showed a 100% increase of familiar settings and an about 20% increase in emotional involvement. Implicitly, daydreaming, when juxtaposed with night dreaming, seems to imply waking in contrast to sleep, although the nature of daydreaming’s position on a vigilance scale remains a subject of daydreaming studies. Much of the present daydreaming literature concerns therapeutic applications of Freud’s free association technique, the proposed royal road to the unconscious. [8]

Hypnagogic states are transient states of decreased wakefulness characterized by short episodes of dreamlike sensory experience. These phenomena were first described by J. Mu¨ller (1826/1967) as “fantastic visual phenomena” (p. 20ff) occurring usually, but not exclusively, at sleep onset. Maury (1848) coined for them the term hypnagogic, from Greek hypnos (sleep) and agogo (I bring). Schacter (1976) described them as “dreamlets.” Subjects usually report short visual percepts like faces, landscapes, and natural or social scenes that may or may not be related to previous daytime experience. These percepts may be of pseudo-hallucinatory (i.e., with preserved insight of unreality) or truly hallucinatory (i.e., experienced as if real) character. In contrast to dreams, hypnagogic experiences are usually rather static, without narrative content, and the subject is not involved as an actor (cf. Sleep and Dreaming section). Hypnagogic-like phenomena may also occur in daytime periods of reduced wakefulness and possibly superimposed over adequate sensory perceptions of the environment. Subjective experience in hypnagogic states comprises vivid, mostly very brief episodes of usually visual (86%) and acoustical (8%) imagery with other sensory modalities occurring less frequently and with an average recall rate of 35%. There is more awareness of the real situation in hypnagogic states than in dreaming. The prevalence for frequent hypnagogic states is estimated at 37% . By definition, hypnagogic states are related to sleep onset, that is, Sleep Stage 1 according to Rechtschaffen and Kales (1968), but may occur even with pre-sleep alpha EEG.[8]

An altered state of consciousness may be defined as a short-term change in the general configuration of one’s individual experience, such that the rational functioning is clearly altered from one’s usual state of consciousness. [9] There are many ways that one’s consciousness can be altered, such as by using psychoactive agents, which are defined as chemical substances that pass through the blood and disturb brain function, causing changes in awareness, attitude, consciousness, and behavior.

Altered states of consciousness may also be induced by: