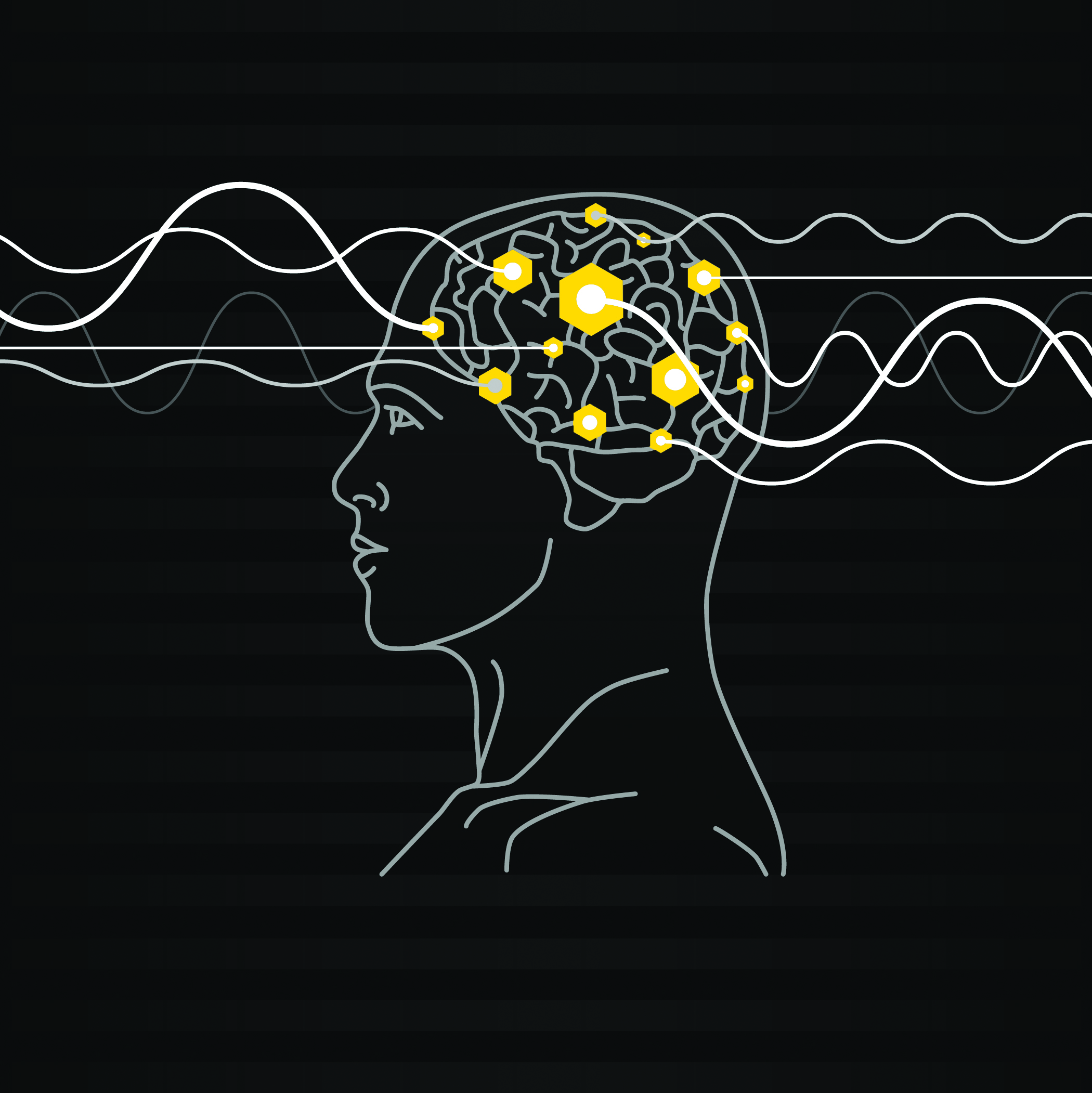 Neural oscillations, or brainwaves, are rhythmic or repetitive patterns of neural activity in the central nervous system. Neural tissue can generate oscillatory activity in many ways, driven either by mechanisms within individual neurons or by interactions between neurons. In individual neurons, oscillations can appear either as oscillations in membrane potential or as rhythmic patterns of action potentials, which then produce oscillatory activation of post-synaptic neurons. At the level of neural ensembles, synchronized activity of large numbers of neurons can give rise to macroscopic oscillations, which can be observed in an electroencephalogram. Oscillatory activity in groups of neurons generally arises from feedback connections between the neurons that result in the synchronization of their firing patterns. The interaction between neurons can give rise to oscillations at a different frequency than the firing frequency of individual neurons. A well-known example of macroscopic neural oscillations is alpha activity.[1]

Our brain works primarily with bioelectrical energy. Although the power of electricity that handle our neurons is low (measured in mill volts), this power processes, manage, distribute and use vast amounts of information and generates multiple answers (almost infinite in possibilities). So by using micro electricity, we can conclude that the brain is a machine of low frequencies. Our brain, in addition to process information that comes by the senses, is capable of emitting extra-sensory information received via similar “electromagnetic waves”, but with lower intensity similar to the frequencies of a radio transmitter-receiver. Our brain can act as a radio station, similar to numerous species of birds that in their migrations are guided by a genuine receiver of terrestrial magnetism located in the pituitary gland. With this receiver, they know where they have to fly and in what direction. It’s like having a real compass incorporated into the brain. The mind could be defined as the “sense” of the brain (like sight is the sense of the eye).[2]

A German psychiatrist, professor at the University of Vienna named Hans Berger (1.843-1941), demonstrated that a device “amplifier” that was called later electroencephalograph could captureelectrical potential (voltage fluctuations) in the human brain. Before him, the English physician Richard Caton (1842-1926) showed similar potential in dogs. The first types of brain frequencies that were discovered were the “alpha” and “theta”. Later, these findings were complemented by research in the range frequencies captured by the electroencephalograph.

Brainwaves and states of consciousness

Each type of wave results in a different neuropsychological state. That is, our mind, our body and our physical and physiological activity are completely different in each of these states or frequencies. The type of neurochemicals and hormones substances discharged into the blood flow varies depending on frequency and as much as the presence and quantity of such substances as the mood we have, interact to produce a physiological-mental-physical-end that involves a mental state. A level of consciousness is conscious thought that is always thinking even in moments of apparent inactivity, but trivial ideas continually pass by consciousness. Most of the thoughts are accompanied by reactions in behavior, and small involuntary movements. When you’re not actively thinking then you’re probably dreaming, according Signer and Streiner (1966) a person has throughout the day about 200 daydreams. Therefore consciousness is the sum of all the different perceptions. The most common consciousness are wakefulness and sleep; however, changes in expressing both cerebral and psycho states change according to conscious or subconscious feelings of each person are distinguished. These changes are directly related to the electrical activity of the brain. This activity can be measured by the number of oscillations per second (Hz) that are linked todifferent states of consciousness in the brain: our brain only perceives a limited range of frequencies indispensable to operate with ease in this three-dimensional medium. 20 to 20,000 vibrations per second are perceptible by our ears, the colors perceived by our eyes range from red to violet (although extending beyond, up and down), all possible smells and tastes (which are also vibrations) and the endless textures that we can distinguish with our skin. But the brain is not only receiver but also is sends vibrations. It has been proven thanks to the EEG that the brain emits waves of varying intensity and frequency depending on the mental state of the person being observed. These waves are classified into:

The brain is scanning for internal associations, altering internal and external consciousness. Delta waves are essential to the daily function of the body and regulate all aspects of physiology. There is some interesting research suggesting that high amplitude delta waves are frequent in ESP experiences and the ‘6th sense’. High amplitude seems related to the ability to empathize with other human beings. The delta band also includes other bio-electric signals from, for example, eye blinks, facial movements and possibly ECG, and so should be interpreted with some care.

It arises mainly in the states of deep sleep and unconsciousness. Very rarely can be experienced being awake unless with a very hard training (Yoga, Meditation, Zen, Hypnosis, Self hypnosis) or with a synchronizer of hemispheres. It corresponds to deep sleep, hypnotic trance, REM sleep. It corresponds to sleep without dream, trance, deep hypnosis. Delta waves are very important in the healing process and strengthening the immune system.

Full memory search/verbal performance, scanning for pleasure, quiet focus/extroversion/low anxiety, low neuroticism. Theta is closely related to the sleep function and to the necessary restoration of the body. During theta states, the body is actively repairing damage done while awake. Theta is essential to the immune system and the various other systems concerned with growth and duplication. The autonomic nervous system is restored and rebalanced through theta states.

During sleep or in deep meditation, autogenous training, hypnosis, yoga (whenever the formations of the subconscious act). The state stimulates creative inspiration. Considered a state for maximum capacity of learning. Fantasy, imagination. Hypnagogic images.

Scanning for internal/external stimulation/spiritual experiences. Alpha states appear to be closely related to passive waiting. This allows the body and the brain to enter into an energy conservation mode. While it is highly passive, the attention wanders from here to there as the immediate details of the outer world become less and less significant. This is a highly relaxed state and often occurs immediately prior to or following after a stressful event. Alpha serves an important function as the connection between the subconscious and conscious. An alpha state allows for the recollection of dreams, the remembrance of events in meditation, the recall of a creative synthesis of the solution to a daily problem, and the creation of healing images to assist the body to repair and recovery from injury.  This state is also associated with high levels of success in sports and performing arts.

Associated with high state of wakefulness, high state of arousal and some drug effects. This type of waves are recorded when the person is awake in a state of normal activity. Correspond to states of conscious attention, anxiety, surprise, fear, stress.

Attention or sensory stimulation, perception and consciousness. They express pathological conditions of maximum tension, excitement and the individual enters a state of STRESS in which the coordination of ideas and normal physical activity are seriously altered.