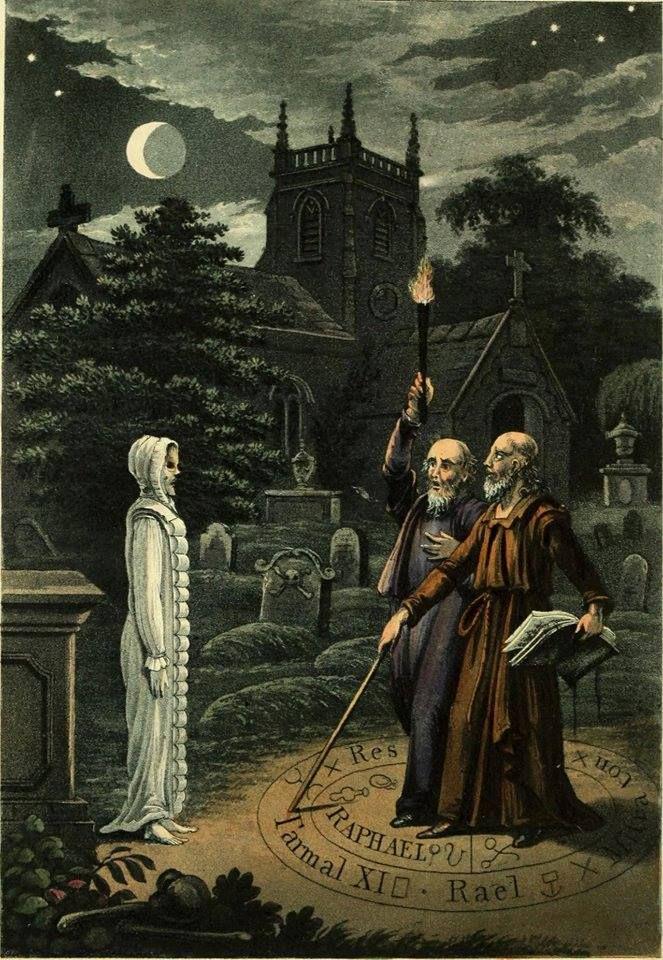 Ceremonial magick (ritual magick, high magick or learned magick) encompasses a wide variety of long, elaborate, and complex rituals of magick. The works included are characterized by ceremony and a myriad of necessary accessories to aid the practitioner. It can be seen as an extension of ritual magick, and in most cases synonymous with it. Popularized by the Hermetic Order of the Golden Dawn, it draws on such schools of philosophical and occult thought as Hermetic Qabalah, Enochian magick, Thelema, and the magick of various grimoires. Ceremonial magick is part of Hermeticism and Western esotericism.[1]

Every technique of magick is intended in various ways to widen the field of vision of the conscious ego to the deeper, more spiritual aspects of the divine nature-which, in reality, is his true or higher self.

Ceremonial magick enables man to become an engine capable of harnessing and directing the enormous power that lies within. A multitude of basic principles are utilized to the end. Adoration, which is essential to attaining a sense of unity with godhead, concentration, development of will and the use of it to accomplish a given purpose, achievement of self-awareness, and the ability to breathe properly, these are but a few of the benefits to be derived from persistent application to the basic practices herein discussed.

Various symbolisms are employed in those phases which deal with adoration, but the choice of symbols is actually unimportant. Once it is realized that basically all religions are one and all prophets are true, it is quite logical to borrow any set of symbols from one religion for a certain purpose, and another set from a second religion for a different purpose. Nor will the practices be of passing value. On the contrary, the set of adorations the student will learn from the book are to be integrated for all time into the daily pattern of living. Next in importance is the achievement of a heightened sense of self-awareness. All other exercises and complex procedures actually begin from thus heightening of self-awareness. To the degree that the horizon of one’s self becomes expanded, to that extent does the self become enlarged.

The development of proper breathing habits will serve many purposes, including eradication of considerable neuromuscular tension, with a consequent increase of energy and vitality. The air by which we are surrounded, and in which we live and move and have our being, is the essence of life itself. Consequently we live, literally surrounded by a circumambient sea of energy and vitality-a divine force which can be assimilated by the simple process of learning to breathe in a proper rhythm, altogether apart from more abstruse occult theories.

Once he has gained control over his mental processes, the student can then learn to stimulate and direct his emotions. This becomes will. So complete and interlocking are the details of this system, that the emotions can then be utilized as a tool to be used in directing and holding the mind steady on a given objective. For fervor and conviction are essential to activating the productive and creative agency with man.

In the process, over a period of time, life becomes consecrated so that all one’s energies become automatically concentrated in a continuous devotion to God or the one life that courses through all of us. In short, the student achieves a perfect and harmonious identification with divine power, life, and love. And then he will know that “existence is pure joy; that all the sorrows are but as shadows; they pass and are done…

Eliphas Lévi conceived the notion of writing a treatise on magick with his friend Bulwer-Lytton. This appeared in 1855 under the title Dogme et Rituel de la Haute Magie, and was translated into English by Arthur Edward Waite as Transcendental Magick, its Doctrine and Ritual.

In 1861, he published a sequel, La Clef des Grands Mystères (The Key to the Great Mysteries). Further magical works by Lévi include Fables et Symboles (Stories and Images), 1862, and La Science des Esprits (The Science of Spirits), 1865. In 1868, he wrote Le Grand Arcane, ou l’Occultisme Dévoilé (The Great Secret, or Occultism Unveiled); this, however, was only published posthumously in 1898.

Lévi’s version of magick became a great success, especially after his death. That Spiritualism was popular on both sides of the Atlantic from the 1850s contributed to his success. His magical teachings were free from obvious fanaticisms, even if they remained rather murky; he had nothing to sell, and did not pretend to be the initiate of some ancient or fictitious secret society. He incorporated the Tarot cards into his magical system, and as a result the Tarot has been an important part of the paraphernalia of Western magicians. He had a deep impact on the magick of the Hermetic Order of the Golden Dawn and later Aleister Crowley, and it was largely through this impact that Lévi is remembered as one of the key founders of the twentieth century revival of magick.

Hermetic Order of the Golden Dawn

The Hermetic Order of the Golden Dawn (or, more commonly, the Golden Dawn) was a magical order of the late 19th and early 20th centuries, practicing a form of theurgy and spiritual development. It was probably the single greatest influence on twentieth century Western occultism. Some aspects of magick and ritual that became core elements of many other traditions, including Wicca,[3][4] Thelema and other forms of magical spirituality popular today, are partly drawn from the Golden Dawn tradition.

English author and occultist Aleister Crowley often introduced new terminology for spiritual and magical practices and theory. For example, he termed theurgy “high magick” and thaumaturgy “low magic”. In The Book of the Law and The Vision and the Voice, the Aramaic magical formula Abracadabra was changed to Abrahadabra, which he called the new formula of the Aeon of Horus. He also famously spelled magick in the archaic manner, as magick, to differentiate “the true science of the Magi from all its counterfeits.”[4]

Aleister Crowley also provides us with some fundamental statements about the nature of magick (also from Book 4):

— “MAGIC is the Science and Art of causing Change to occur in conformity with Will.”

— “Every intentional (willed) act is a Magical Act.”

Enochian magick is a system of ceremonial magick based on the evocation and commanding of various spirits. It is based on the 16th-century writings of John Dee and Edward Kelley, who claimed that their information, including the revealed Enochian language, was delivered to them directly by various angels. Dee’s journals contained the Enochian script, and the tables of correspondences that accompany it. Dee and Kelley believed their visions gave them access to secrets contained within the Book of Enoch.[5]