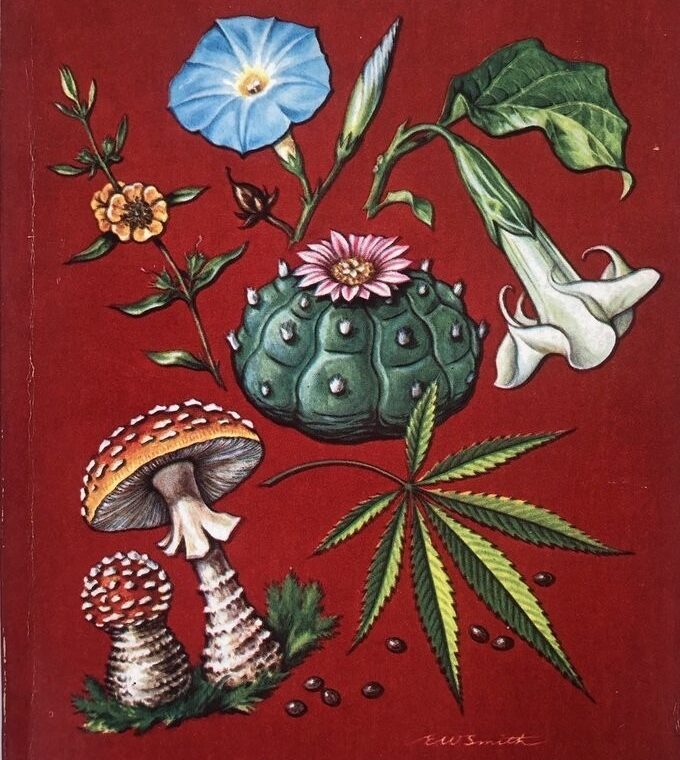 Entheogens (from the Ancient Greek ἔνθεος entheos [“god”, “divine”] and γενέσθαι genesthai [“generate” – “generating the divine within”]) are a family of psychoactive substances, typically of plant origin, that are used in religious, ritual, or spiritual contexts. Jonathan Ott is credited with coining the term in 1979.[1]

Entheogens have been used in a ritualized context for thousands of years and their religious significance is well established with anthropological and academic literature. Examples of traditional entheogens include psychedelics like peyote, psilocybin mushrooms, ayahuasca, and iboga; atypical hallucinogens like salvia and Amanita muscaria; quasi-psychedelics like cannabis; and deliriants like datura.

With the advent of organic chemistry, there now exist many synthetic drugs with similar psychoactive properties, many of which are derived from these plants. Many pure active compounds with psychoactive properties have been isolated from these respective organisms and synthesized chemically. These include the naturally occurring mescaline, psilocybin, DMT, salvinorin A, ibogaine, ergine, and muscimol, the semi-synthetic LSD, and synthetic substances (e.g., DPT used by the Temple of the True Inner Light and 2C-B used by the Sangoma).[2]

More broadly, the term entheogen is used to refer to any psychoactive substance used for its religious or spiritual effects, whether or not in a formal religious or traditional structure. This terminology is often chosen to contrast with the recreational use of the same substances. Studies such as the Marsh Chapel Experiment have documented reports of spiritual experiences from participants who were administered psychoactive substances in controlled trials.[4] Ongoing research is limited due to widespread drug prohibition; however, some countries have legislation that allows for traditional entheogen use.

The use of entheogens in human cultures is generally ubiquitous throughout recorded history. The number of entheogen-using cultures is therefore very large. Some of the instances better known to Western scholarship are discussed here.

The best-known entheogen-using culture of Africa is the Bwitists, who used a preparation of the root bark of Iboga (Tabernanthe iboga).[4] A famous entheogen of ancient Egypt is the blue lotus (Nymphaea caerulea). There is evidence for the use of entheogenic mushrooms in Côte d’Ivoire (Samorini 1995). Numerous other examples of the use of plants in shamanic ritual in Africa are yet to be investigated by western science.

Entheogens have played a pivotal role in the spiritual practices of most American cultures for millennia. The first American entheogen to be subject to scientific analysis was the peyote cactus (Lophophora williamsii). For his part, one of the founders of modern ethno-botany, the late Richard Evans Schultes of Harvard University documented the ritual use of peyote cactus among the Kiowa of Oklahoma.

In addition to indigenous use of entheogens in the Americas, one should also note their important role in contemporary religions movements, such as Rastafarianism and the Church of the Universe.

The indigeneous peoples of Siberia (from whom the term shaman was appropriated) have used the fly agaric mushroom (Amanita muscaria) as an entheogen. The ancient inebriant Soma, mentioned often in the Vedas, may have been an entheogen. (In his 1967 book, Wasson argues that Soma was fly agaric. The active ingredient of Soma is now presumed to be ephedrine, an alkaloid with entheogenic properties derived from the soma plant, identified as Ephedra pachyclada.)[3]

The use of entheogens in Europe was all but eliminated with the rise of post-Roman Christianity and especially during the great witch hunts of Early Modernity. European witches used various entheogens, including deadly nightshade (Atropa belladonna), mandrake (Mandragora officinarum) and henbane (Hyoscyamus niger). These plants were used, among other things, for the manufacture of “flying ointments”. In Christian society, witches were commonly believed to fly through the air on broomsticks after coating them with the ointment and applying them to the skin. Consequently, any association with these plants could have proven extremely dangerous and lead to one’s execution as a practitioner of witchcraft. The imposition of Roman Christianity also saw the end of the two-thousand-year-old tradition of the Eleusinian Mysteries, the initiation ceremony for the cult of Demeter and Persephone involving the use of a possibly entheogenic substance known as kykeon. Similarly, there is evidence that nitrous oxide or ethylene may have been in part resposible for the visions of the equally long-lived Delphic oracle.[3]