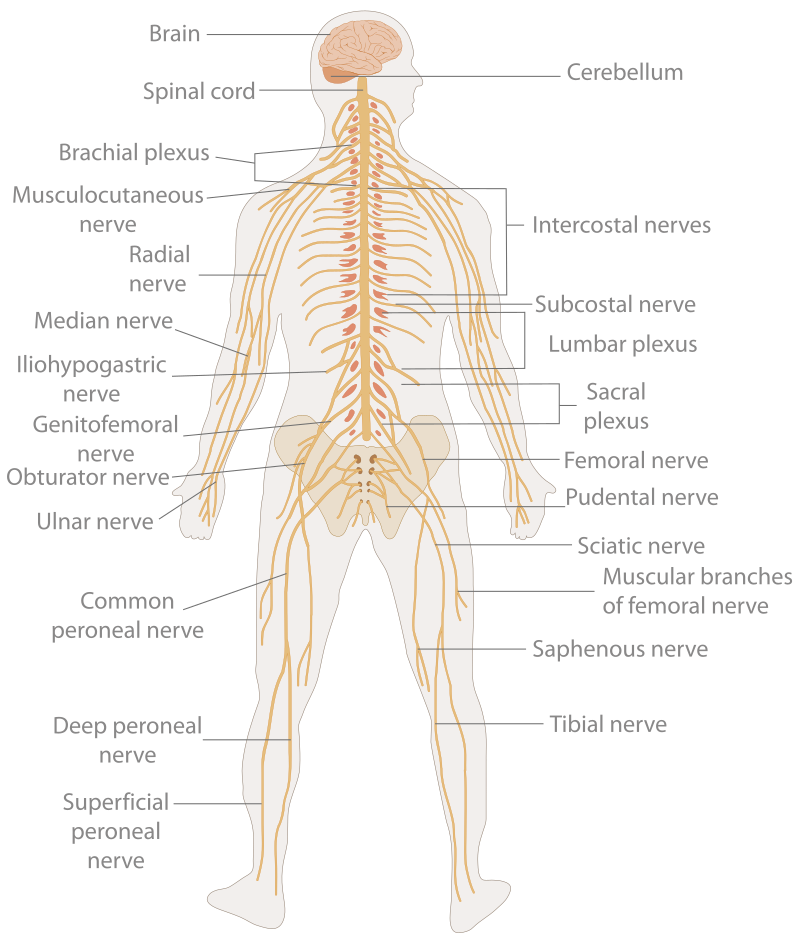 At the cellular level, the nervous system is defined by the presence of a special type of cell, called the neuron, also known as a “nerve cell”. Neurons have special structures that allow them to send signals rapidly and precisely to other cells. They send these signals in the form of electrochemical impulses traveling along thin fibers called axons, which can be directly transmitted to neighboring cells through electrical synapses or cause chemicals called neurotransmitters to be released at chemical synapses. A cell that receives a synaptic signal from a neuron may be excited, inhibited, or otherwise modulated. The connections between neurons can form neural pathways, neural circuits, and larger networks that generate an organism’s perception of the world and determine its behavior. Along with neurons, the nervous system contains other specialized cells called glial cells (or simply glia), which provide structural and metabolic support.

Nervous systems are found in most multicellular animals but vary greatly in complexity. The only multicellular animals that have no nervous system at all are sponges, placozoans, and mesozoans, which have very simple body plans. The nervous systems of the radially symmetric organisms ctenophores (comb jellies) and cnidarians (which include anemones, hydras, corals and jellyfish) consist of a diffuse nerve net. All other animal species, with the exception of a few types of worms, have a nervous system containing a brain, a central cord (or two cords running in parallel), and nerves radiating from the brain and central cord. The size of the nervous system ranges from a few hundred cells in the simplest worms, to around 300 billion cells in African elephants.[2]

The central nervous system functions to send signals from one cell to others, or from one part of the body to others and to receive feedback. Malfunction of the nervous system can occur as a result of genetic defects, physical damage due to trauma or toxicity, infection, or simply senescence. The medical specialty of neurology studies disorders of the nervous system and looks for interventions that can prevent or treat them. In the peripheral nervous system, the most common problem is the failure of nerve conduction, which can be due to different causes including diabetic neuropathy and demyelinating disorders such as multiple sclerosis and amyotrophic lateral sclerosis. Neuroscience is the field of science that focuses on the study of the nervous system. [3]