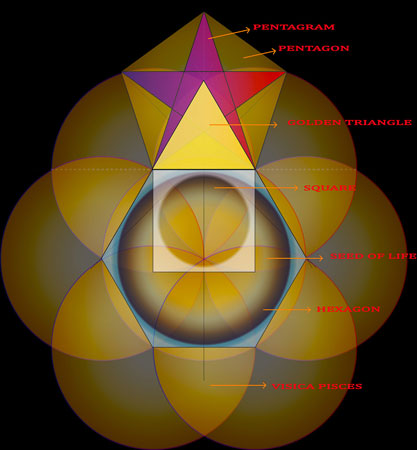 The Pentagram is a symbol of a star encased in a circle. Always with 5 points (one pointing upward), each has its own meaning. The upward point of the star is representative of the spirit. The other four points all represent an element; earth, air, fire, and water. All these things contribute to life and are a part of each of us. The pentagram is called in Kabbalah the sign of the microcosm, that sign so exalted by Goethe in the beautiful monologue of Faust:

” Ah, how do all my senses leap at this sight! I feel the young and sacred pleasure of life bubbling in my nerves and veins. Was it a God who traced this sign which stills the vertigo of my soul, fills my poor heart with joy, and, in a mysterious rapture, unveils the forces of nature around me. Am I myself a God! All is so clear to me; I behold in these simple lines the revelation of active nature to my soul. I realize for the first time the truth of the wise man’s words: The world of spirits is not closed! Thy sense is obtuse, thy heart is dead! Arise! Bathe, adept of science, thy breast, still enveloped by an earthly veil, in the splendours of the dawning day! ” (Faust, Part i. sc. 1).

The number 5 has always been regarded as mystical and magical, yet essentially ‘human’. We have five fingers/toes on each limb extremity. We commonly note five senses – sight, hearing, smell, touch and taste. We perceive five stages or initiations in our lives – e.g. birth, adolescence, coitus, parenthood and death. (There are other numbers / initiations / stages / attributions). The number 5 is associated with Mars. It signifies severity, conflict and harmony through conflict. In Christianity, five were the wounds of Christ on the cross. There are five pillars of the Muslim faith and five daily times of prayer. Five were the virtues of the medieval knight – generosity, courtesy, chastity, chivalry and piety as symbolized in the pentagram device of Sir Gawain. The Wiccan Kiss is fivefold – feet, knees, womb, breasts, lips – Blessed be. The number 5 is prime. The simplest star – the pentagram – requires five lines to draw and it is unicursal which means it is a continuous loop. Expressing the saying “Every man and every woman is a star”, we can juxtapose Man on a pentagram with head and four limbs at the points and the genitalia exactly central. This is Man in microcosm, symbolizing our place in the Macrocosm or universe and the Hermetic / Tantric philosophy of associativity “as above, so below”. [1]

The geometric proportions of the regular pentagram are those of the Golden Section. The Golden Proportion is one beloved of artists since Renaissance times and also to be found in post-Hellenic art and in the geomantic planning of Templar sites, being those proportions of a rectangle considered most pleasing to the eye. Here, the ratio of the lengths of the two sides is equal to the ratio of the longer side to the sum of the two sides. Thus:

How to draw a perfect Pentagram [3] 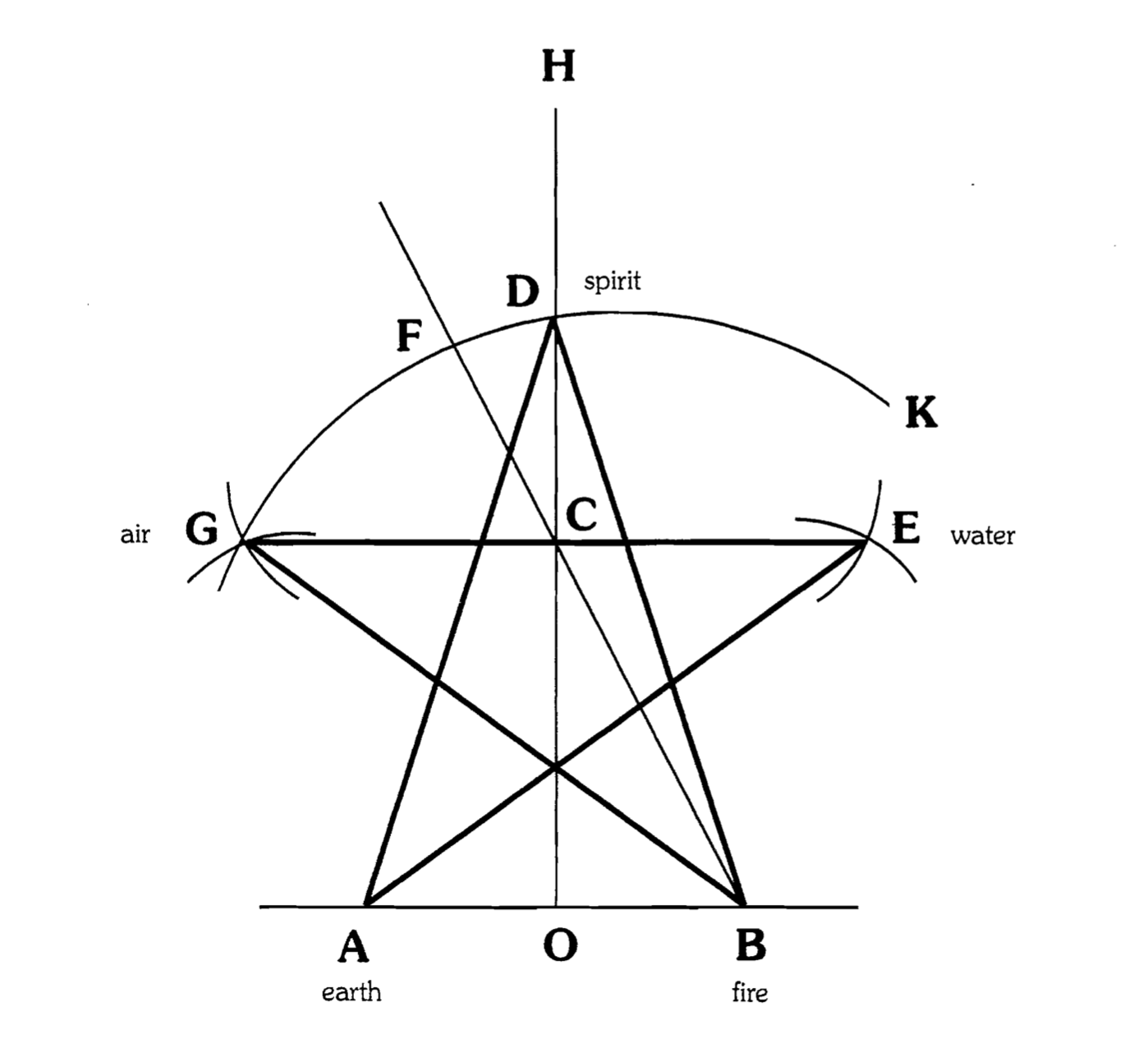 With a pencil and straight edge, draw a straight horizontal line on a piece of paper.

Place two points on this line that will be known as A and B. (AB will be the length of the line between the earth and fire points of the pentagram.)

Find the center of line AB and mark it with another point. We will call this point 0 .

From 0, draw a line perpendicular to AB. We will call this new line OH.

Starting with point 0, mark off a section of line OH that is equal in length to AB. The new point will be called C.

Draw a straight line from B to C, and continue the line well past point C.

From C, measure off a portion of the new line that is equal in length to OA and mark it with another point. This will be point F.

The next part will require a compass. Starting at point B as the center, with line BF as the radius, draw circle FKD, bisecting line OH at point D. (This is the spirit point of the pentagram.)

Adjust the compass so that the radius is equal to the length of line AB.

With B as the center, draw a semicircle toward the upper right-hand corner of the paper.

With D as the center, draw a semicircle toward the lower right- hand comer of the paper. This semicircle will intersect the pre- vious one at point E. (This is the water point of the pentagram.)

With A as the center, draw a semicircle toward the upper left- hand corner of the paper.

With D as the center, draw a semicircle toward the lower left- hand comer of the paper. This semicircle will intersect the pre- vious one at point G. ( h s is the air point of the pentagram.) 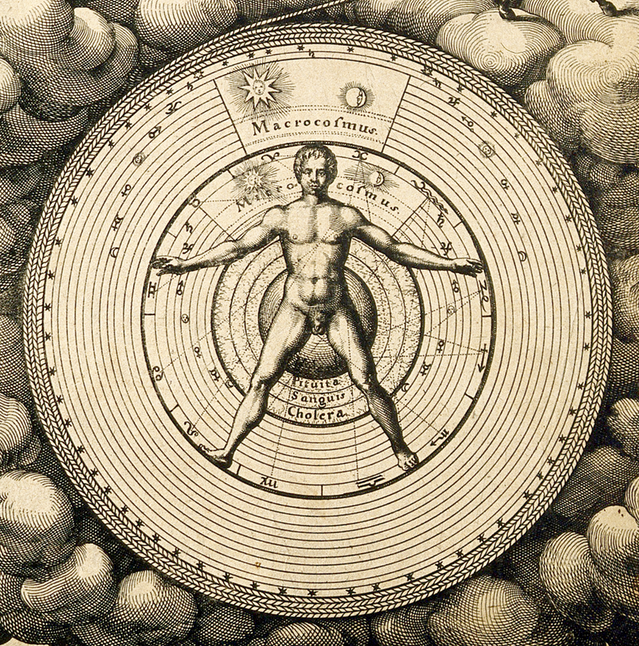 The pentagram, or sign of the microcosmos, represents, among other magical mysteries, the double sympathy of the human extremities with each other and with the circulation of the astral light in the human body. Thus, when a man is represented in the star of the pentagram, as may be seen in the ” Occult Philosophy” of Agrippa, it should be observed that the head corresponds in masculine sympathy with the right foot and in feminine sympathy with the left foot; that the right hand corresponds in the same way with the left hand and left foot, and reciprocally of the other hand. This must be borne in mind when making magnetic passes, if we seek to govern the whole organism and bind all members by their proper chains of analogy and natural sympathy. The pentagram, which, in gnostic schools, is called the blazing star, is the sign of intellectual omnipotence and autocracy. It is the star of the magi; it is the sign of the Word made flesh; and, according to the direction of its points, this absolute magical symbol represents order or confusion. The sign of the pentagram is called also the sign of the microcosm, and it represents what the Kabbalists of the book of Zohar term the microprosopus. The complete comprehension of the pentagram is the key of the two worlds. It is the absolute philosophy and natural science. The pentagram is consecrated with the four elements; magical figure is breathed on five times; it is sprinkled with consecrated water; it is dried by the smoke of five perfumes, namely, incense, myrrh, aloes, sulphur, and camphor, to which a little white resin and ambergris may be added.[1]

[1].The Trancedental Magick by Eliphas Levi , 1958 [2]. Article about the Pentagram via http://www.obscholtemuseum.nl [3]. Regardie, Israel. The Middle pillar: The balance between mind & magick.
Tags:
Community
Community
Join the community