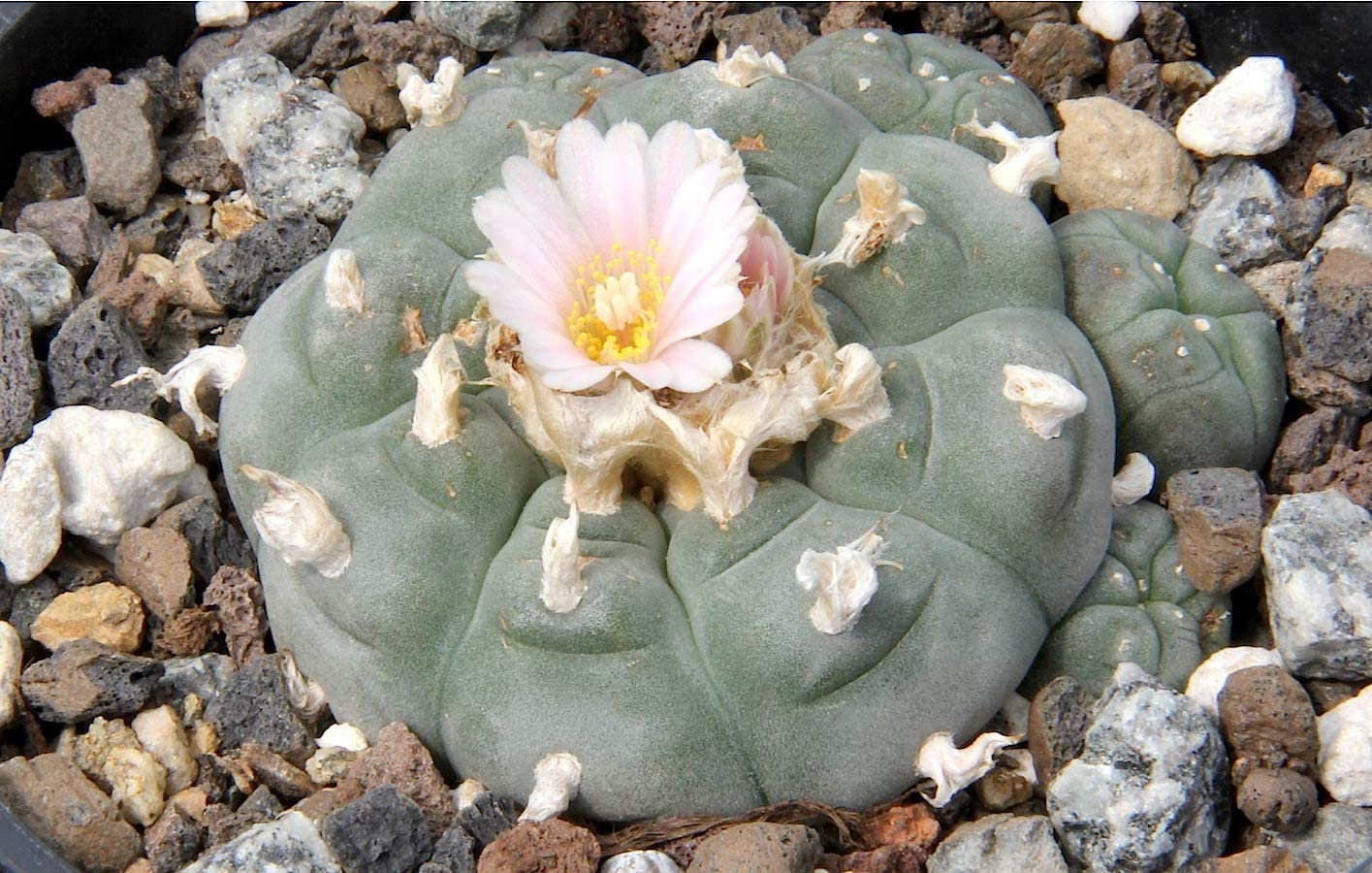 Lophophora williamsii (pronounced /loʊˈfɒfərə wɪlˈjæmsiaɪ/), better known by its common name Peyote, (from the Nahuatl word peyotl), is a small, spineless cactus. It is native to southwestern Texas and through central Mexico. It is found primarily in the Chihuahuan desert and in the states of Tamaulipas and San Luis Potosi among scrub, especially where there is limestone.

It is well known for its psychoactive alkaloids, particularly mescaline. It is used world wide as an entheogen, and supplement to various transcendence practices, including meditation, psychonautics, and psychedelic psychotherapy. Peyote has a long history of ritual religious and medicinal use by indigenous Americans. It flowers from March through May, and sometimes as late as September. The flowers are pink, with thigmotactic anthers (like Opuntia).[1]

Lophophora williamsii grows in calcareous deserts, in river valleys, generally under vegetation.Its growth is exceedingly slow, and the plant may require up to 15 years to mature. At maturity the cactus may attain a diameter oft2 cm, rising some 3-6 cm above the surface of the ground. The plant has a long, tapering, carrot-like root which may be 30 cm or more in length at maturity. Often accessory heads will sprout from this root, and small, tight clusters of heads are common. The flowers are pink to whitish, solitary, appearing at the crown of the cactus, there surrounded by a mass of whitish hairs.[2]

Peiotl or peyotl was the name of this cactus in the Nahuatl language, tongue of the Mexias (or Aztecs, as they are today known; the Chichimecas were their forefathers). The word probably meant something like “furry thing” to the Aztecs, as it referred at once to a species of silky caterpillar and the cactus under discussion, which is crowned with tufts ofsilky hairs. There is every indication that the Aztecs (who lived in the Valley of Mexico, the site of the modern capital) and other indigenous groups who lived in northern Mexico, revered this cactus and used it as an adjunct to their religious rites. R.G. Wasson has proposed that the name peyotl is the origin of a contemporary Mexicanism, piule, referring to entheogens in general, since the term is applied to various inebriants, including some species of entheogenic mushrooms and entheogenic morning glory seeds. This etymology was proposed independently by B.P. Rekn.[2]

On 19 June 1620, the “Inquisitors against heresy, depravity and apostasy” formally decreed in Mexico City that:[2]

“The use of the Herb or Root called Peyote… is a superstitious action and reproved as opposed to the purity and sincerity of our Holy Catholic Faith, being so that this said herb, nor any other cannot possess the virtue and natural efficacy attributed to it for said effects, nor to cause the images, phantasms and representations on which are founded said divinations, and that in these one sees notoriously the suggestion and assistance of the devil, author of this abuse…”

In a word, use of peyotl and other entheogenic plants was vigorously persecuted by the Spaniards. The document continues:[2]

“We decree that henceforth no person, of whatever class and condition may use of this said herb, this Peyote, or of others for said effects, nor others similar, under no title or color, nor suffer that the Indians nor other persons consume these, being warned that doing the contrary, besides incurring said censures and penalties, we will proceed against whoever is rebellious and disobedient, as against persons suspect in the holy Catholic faith.”

There is no question that use of peyotl came to the Plains Indians at the height of the persecution and destruction of Indian culture by whites. Predictably, peyotl use was stigmatized and used by some of the whites to attack the Indians’ ways, in such bigoted articles as “Habit indulgence in certain Cactaceous plants among the Indians” (Blair 1921). In self-defense, and in an attempt to salvage something uniquely Indian from the onslaught of white acculturation, Indian peyotl users allied with anthropologists and civil libertarians to seek protection under the Constitutional guarantees of religious freedom. After a tough battle, one of the few the Indians were to win, Cheyenne, Kiowa, Ponca, Otoe and Comanche leaders succeeded in incorporating the “Native American Church” in Oklahoma in I918, with peyotl use as a sacramental observance. Soon the Church had spread to many other states, and to Canada in 1954 (Anderson 1980), and today there are no fewer than a quarter of a million members. It is interesting to note that peyotl use met with some resistance among older Indians, still clinging to their cultural heritage. Use of peyotl now includes members of many North American tribes, and this use is now legally sanctioned.[2]

In 1888 Louis Lewin published in Berlin the first chemical paper on peyotl (Lewin 1888). This caused a sensation, as entheogenic plants had hitherto been unknown to European scientists. Lewin reported the isolation of an alkaloid, which he named Anhalonin (today considered to have been likely a mixture of alkaloids); this was the first published report of alkaloids from the Cactaceae. Lewin had obtained dried peyotl from the u.s. pharmaceutical firm Parke, Davis and Co. during a trip to the U.S. in 1887. Other scientists became interested in peyotl, and phytochemical work on the plant culminated in 1895 and 1896, when German chemist Arthur Heffter isolated four pure alkaloids from the plant, one of which he named Mezcalin, the others being Anhalonin, Anhalonidin and Lophophorin; he also described the isolation of Pellotin (or Peyotlin) from Lophophora Diffusa. Heffter was unable to detect visionary activity of his isolated alkaloids in animal experiments, which led him to employ the “Heffter Technique”, testing the alkaloids on himself, in an heroic series of self-experiments, which he summarised as follows [2]:

The conclusive experiment took place on 23 November 1897, and this became the world’s first Mezcalin “trip” and the first entheogenic experiment with a purified compound. [2]

Mescaline also occurs in significant amounts in Trichocereus pachanoi, sometimes wrongly called Opuntia cylindrica, the stately San Pedro cactus of South America. This cactus seems to have been important for millennia as a ritual entheogen in Andean cultures. [2]

The effective dose for mescaline is 200–500 mg, equivalent to about 5 g of dried peyote. [3] Following oral ingestion, the effects of mescaline will begin in about 1-2 hours and last about 8 to 10 hours.[2] When combined with appropriate set and setting, peyote is reported to trigger states of deep introspection and insight that have been described as being of a metaphysical or spiritual nature. At times, these can be accompanied by rich visual or auditory effects (see synesthesia).