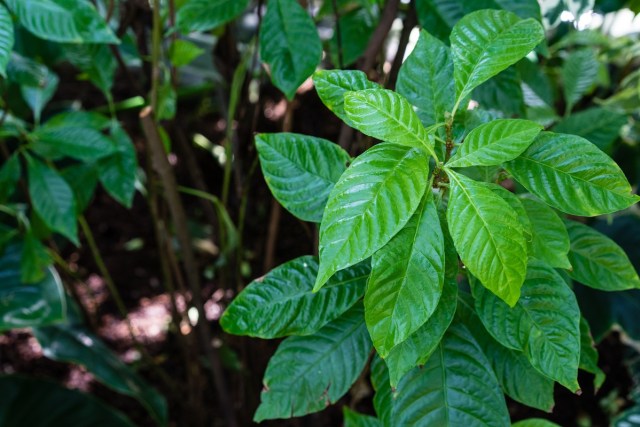 Psychotria viridis is a perennial shrub of the family Rubiaceae. In the Quechua languages it is called chacruna or chacrona. In Quechua, chaqruy is a verb meaning “to mix”. P. viridis is a close relative of Psychotria carthagenensis (a.k.a. samiruka or amiruca) of Ecuador. The leaves differ by P. viridis having leaf edges that extend all the way to the base of the leaf stem.[1]

Psychotria viridis (also known as Chacruna) is an additive to the ayahuasca brew as a source of DMT.

Dried P. viridis contains approximately 0.3% dimethyltryptamine (DMT). Other alkaloids such as beta-carbolines and N-methyltryptamine (NMT) have been found. The alkaloid content is said to be highest in the morning.

Psychotria viridis, commonly known as chacruna, is a small tree species that possesses several therapeutic properties. In fact, people residing in the native habitats of this species also call the plant “the vision tree”. Native tribes of the Amazon basin use the leaves of this herb for curing as well as reversing a number of disease.

Going back into the history of Psychotria viridis, this herb is a member of the Rubiaceae family and also belongs to the coffee family. This plant is well known for its synergistic use in customary ayahuasca brews prepared by native inhabitants in Central and South America. For several centuries the medicine men and women as well as shamans of South America have employed the leaves of chacruna to turn around various ailments. As a result, extracts of the herb have a repute of being an effective herbal remedy for specific illnesses and is also used in present day medicine. For example, the entheogenic indole alkaloid called dimethyltryptamine (DMT) is the main component of Psychotria viridis. This chemical is found in different concentrations in the plant dependent on several harvesting factors. Chacruna possesses several compounds that have therapeutic uses, this is a legitimate as well as important herbal remedy for a number of common ailments. As the medications are obtained from nature, their traits remain unchanged and equally potent as those of the plant. People in Central and South American nations like Brazil, Colombia, Ecuador and Peru have been traditionally using Psychotria viridis for several centuries. Often, they use the leaves of chacruna in their religious ceremonies. This apart, the leaves are also used to prepare a concoction which it taken orally. It is believed that drinking this concoction helps people to anticipate the future, perform miracles and even thwart witchcraft. Moreover, it is believed that this herb also helps to cure migraine headaches and cleanse the stomach, by this means rinse out the intestines.[2]

Several people also use Psychotria viridis for its hallucinogenic effects. The local tribes in Central and South America claim that consuming a brew prepared from the herb enables them to clearly see the animals in the dense Amazon forests, where their normal vision otherwise fails to detect anything. On the other hand, some people in North America as well as in Europe try to employ this herb in the form of a recreational drug. They generally mix Psychotria viridis with other plants to prepare a combination that has a far more spectacular effect.

Compared to other plants that have hallucinogenic effects, chacruna has a much higher concentration of this DMT. Hence, Psychotria viridis is considered to be a controlled substance in several regions of the world. Consequently, this plant is not sold at greenhouses or plant nurseries either in the United States or in several European nations. It is worth noting that any person found possessing Psychotria viridis leaves is likely to face criminal proceedings in a number of jurisdictions. This is mainly because the high concentration of DMT and use of the plant as a recreational drug.[2]