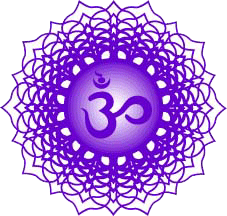 Sahasrara, the crown chakra located at or above the top of the head, is associated with the pineal gland and the cerebral cortex. Traditionally this center is given the various colors of the rainbow. An alternate color is clear. The word Sahasrara means “thousand- petalled lotus,” which is the symbol of this chakra, alluding to the thousands of brain cells with n the cerebrum. The seventh chakra controls all aspects of mind and body, and it regulates the activities of all the other chakras. Its energy is often described as pure thought, spiritual understanding, bliss, peace, eternal life, super-consciousness, and the divine white light. The seventh chakra is activated at peak instances of oneness with the divine. It is said to be the abode of Shiva (illuminated consciousness), which demolishes ignorance and illusion.

The element of the Sahasrāra Chakra is ĀDI TATTVA or ĪSHVARA TATTVA . It is the source of creation, the pure light and one reality – God. This Tattva is Ādi Anādi. Ādi means “without beginning”, Anādi means “without end” – therefore infinite. As soon as this Tattva unites with a quality (Guna) it is bound and therefore limited – just as pure water has no taste of its own, but is modified by and takes on the taste of whatever is added to it. In the Cosmos there are diverse manifestations of this one Tattva with various qualities and functions – such as fire, water, air and earth – but the basis is always the same, the pure essence.

Ādi Shiva is the uncreated creator of the Cosmos (Svayambhu). He represents Ānanda (bliss), Purusha (pure consciousness) and Moksha (liberation). He is perfect, eternal and divine, and radiant like a million suns. No Karmas can touch Him, all impurities melt and burn in his proximity. Only purity, clarity, light, love and truth emanate from Him.

Shakti is located in the Mūlādhāra Chakra and Shiva in the Sahasrāra Chakra. Between the two exists an irresistible attraction, and we experience the distance between them as a dark zone of unclarity and ignorance. The trench that separates Shiva and Shakti (otherwise known as Purusha and Prakriti – consciousness and nature) is “not-knowing”, and the consequence of “not-knowing” are emotions full of suffering, such as loneliness, sadness, bitterness, fear, doubt, etc., that accompany us through life. The bridge across this gap of ignorance is blocked by barriers and the rocks of numerous Karmas and restrictive qualities.

Icchā Shakti (willpower) is the force that finally provides the impulse for the removal of the rocks of Karmas and cumbersome qualities once and for all. Once this Sacred Will arises within the Jīvātmā, it leads inexorably to union with the Divine Self. In line with the Karma and personality structure of the aspirant, this process can either continue in tumultuous and intense circles or unfold gradually and calmly.

The union of Shiva and Shakti occurs when the stream of energy in the two main Nādīs, Idā and Pingalā , unite and rise through the Sushumnā Nādī.

To speak about the lotus of the thousand petals above, the Sahasrara center, is quite superfluous because that is merely a philosophical concept with no substance to us whatever; it is beyond any possible experience. In vjñv there is still the experience of the self that is apparently different from the object, God. But in Sahasrara one understands that it is not different, and so the next conclusion would be that there is no object, no God, nothing but brahman. There is no experience because it is one, it is without a second. It is dormant, it is not, and therefore it is Nirvana.[2]