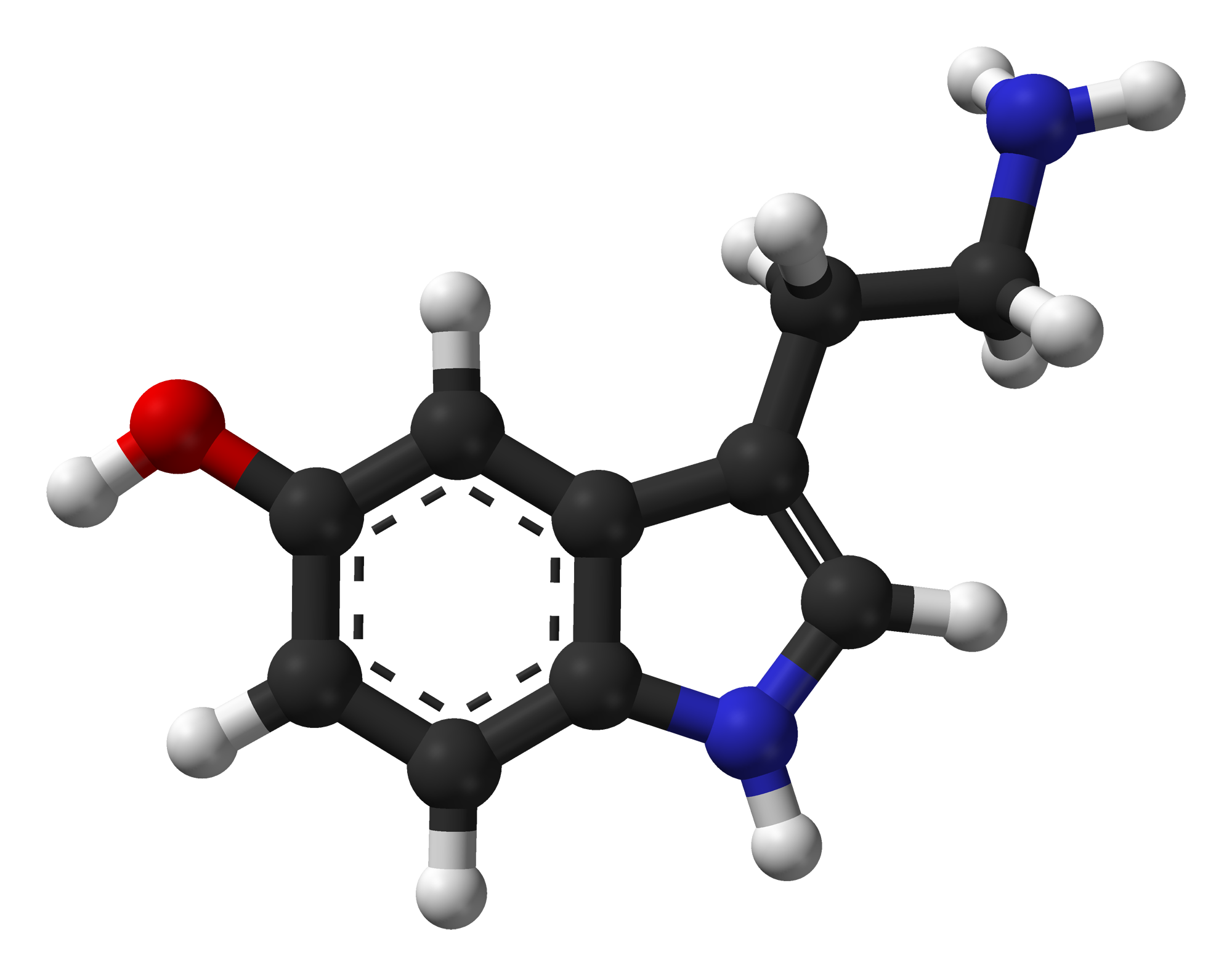 Serotonin (pronounced /ˌsɛrəˈtoʊnən/) (5-hydroxytryptamine, or 5-HT) is a monoamine neurotransmitter synthesized in serotonergic neurons in the central nervous system (CNS) and enterochromaffin cells in the gastrointestinal tract of animals including humans. Serotonin is also found in many mushrooms and plants, including fruits and vegetables.

The serotonin receptors modulate the release of many neurotransmitters, including glutamate, GABA, dopamine, epinephrine / norepinephrine, and acetylcholine, as well as many hormones, including oxytocin, prolactin, vasopressin, cortisol, corticotropin, and substance P, among others. The serotonin receptors influence various biological and neurological processes such as aggression, anxiety, appetite, cognition, learning, memory, mood, nausea, sleep, and thermoregulation. The serotonin receptors are the target of a variety of pharmaceutical and recreational drugs, including many antidepressants, antipsychotics, anorectics, antiemetics, gastroprokinetic agents, antimigraine agents, hallucinogens, and entactogens.[4]

In the central nervous system, serotonin plays an important role as a neurotransmitter in the modulation of anger, aggression, body temperature, mood, sleep, human sexuality, appetite, and metabolism, as well as stimulating vomiting.[5]

Serotonin has broad activities in the brain, and genetic variation in serotonin receptors and the serotonin transporter, which facilitates reuptake of serotonin into presynapses, have been implicated in neurological diseases. Drugs targeting serotonin-induced pathways are being used in the treatment of many psychiatric disorders, and one focus of clinical research is the influence of genetics on serotonin action and metabolism in psychiatric settings. Such studies have revealed that the variation in the promoter region of the serotonin transporter protein accounts for nearly 10% of total variance in anxiety-related personality, and the effect of this gene on depression was found to interact with the environment.[6]

Levels of serotonin in the brain show association with aggression[7], and a mutation in the gene which codes for the 5-HT2A receptor may double the risk of suicide for those with that genotype.[8] In addition, serotonin is also a peripheral signal mediator. It is found extensively in the human gastrointestinal tract as about 80-90% of the body’s total serotonin is found in the enterochromaffin cells in the gut.[5]In the blood, the major storage site is platelets, which collect serotonin for use in mediating post-injury vasoconstriction. Recent research suggests that serotonin plays an important role in liver regeneration and acts as a mitogen (induces cell division) throughout the body. Recent research also suggests that intestinal serotonin may inhibit bone formation. [9]

Symptoms can start showing within minutes and can include increased heart rate, sweating, anxiety, hyperthermia, shivering, high blood pressure, agitation, seizures, and rarely death. Symptoms usually resolve after 24 hours, but can last up to several months in some cases.

Serotonin deficiency is a common contributor to mood problems. Some feel it is an epidemic in the United States. Serotonin is key to our feelings of happiness and very important for our emotions because it helps defend against both anxiety and depression. Many of the current biochemical theories of depression focus on the biogenic amines, which are a group of chemical compounds important in neurotransmission—most importantly norepinephrine, serotonin and, to a lesser extent, dopamine, acetylcholine and epinephrine.

WHAT CAUSES OR CONTRIBUTES TO SEROTONIN DEFICIENCY?

Many life stressors can lead to low serotonin:

You may have a shortage of serotonin if you have a sad depressed mood, low energy, negative thoughts, feel tense and irritable, crave sweets, and have a reduced interest in sex. Other serotonin related disorders include: