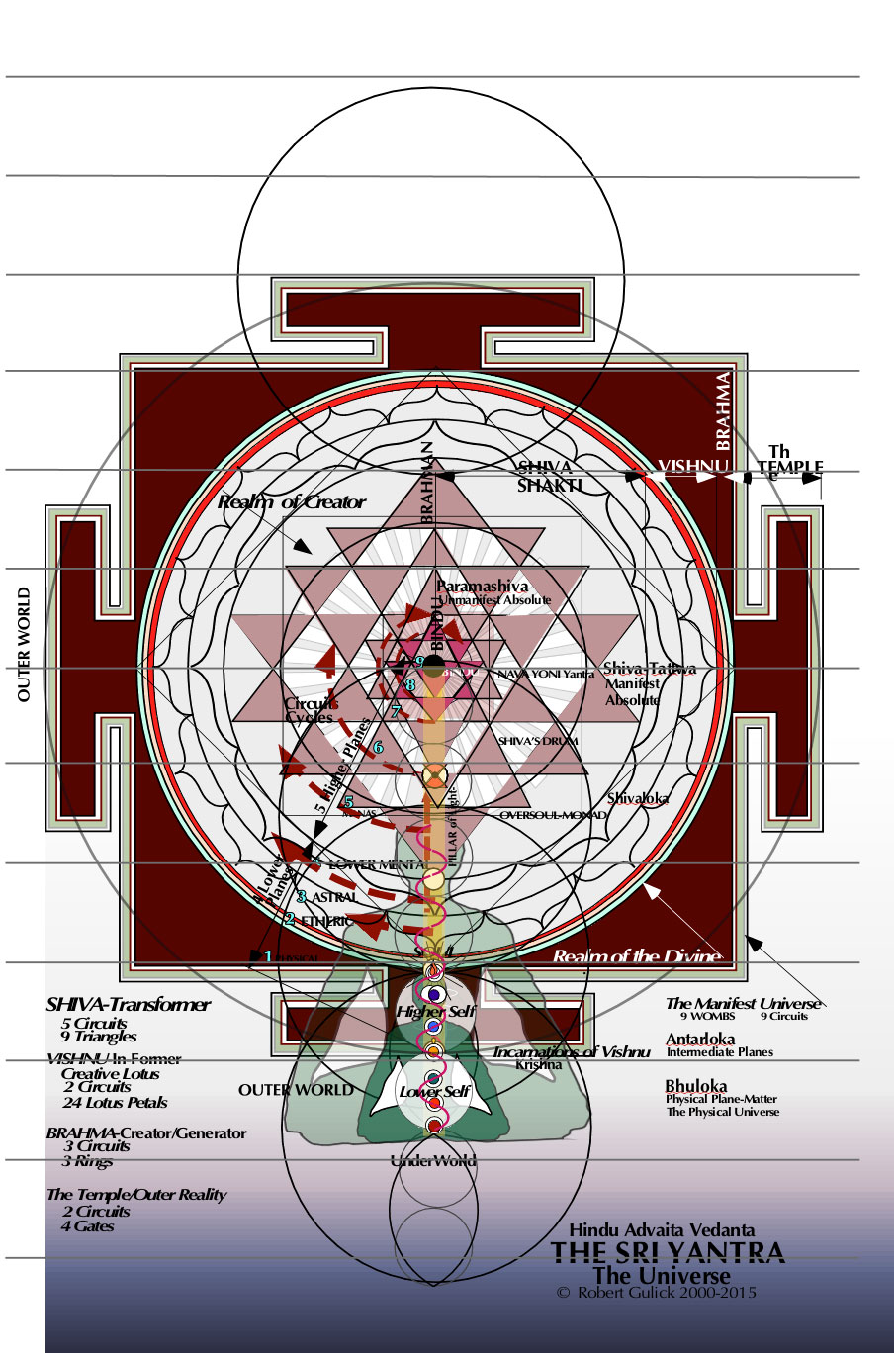 Sri Yantra (pronounced Shree Yantra), also known as Sri Chakra, is called the mother of all yantras because all other yantras derive from it. In its three-dimensional forms, Sri Yantra is said to represent Mount Meru, the cosmic mountain at the center of the universe.

The Sri Yantra is conceived as a place of spiritual pilgrimage. It is a representation of the cosmos at the macrocosmic level and of the human body at the microcosmic level (each of the circuits corresponds to a chakra of the body).

According to Tantra, the creation of the world begins with an act of division of the opposites that are united in the deity. From their splitting arises, in an explosion of energy, the multiplicity of the world. Starting from pure unity (Shiva), the world is continuous unfolding (energized by the power of Shakti), until a state is reached when the process must reverse and involute back to the very beginning.  Multiplicity must once again become unity. Yantras are symbolic representations of this process of evolution and involution.

The human being is a miniature universe. All that is found in the cosmos can be found within each individual, and the same principles that apply to the universe apply in the case of the individual being. For human beings, the body is considered the most perfect and powerful of all yantras and is seen as a tool for inner awareness.

A yantra makes the process of evolution conscious to the adept of Tantrism. It enables the adept to retrace his steps from the outward-directed world of multiplicity to the inward focus of unity.

The Sri Yantra represents the evolution of the multiverse as a result of the natural Divine Will of the Godhead Aadi Paraa Shakti. The four upward-pointing isosceles triangles represent the Goddess’s masculine embodiment Brahm, while the five downward-pointing triangles symbolize the female embodiment Jagat jannani.[2]

The Sri Yantra is also known as the nav chakra because it can be seen to consist of nine concentric layers that radiate outward from the bindu. (“Nau” or “nava” means “nine” in Sanskrit.) Each level corresponds to a mudra, a yogini, and a specific form of the deity Tripura Sundari along with her mantra. The various deities residing in the nine levels of the Shri Yantra are described in the Devi Khadgamala Mantra. These levels, listed from outermost to innermost, are:[1]

Sarva Saubhagyadayaka, the outermost ring of small triangles (14 in total);

Sarvarthasadhaka, the next ring of triangles (10 in total);

Sarva Siddhiprada, one small triangle containing the bindu at its center; 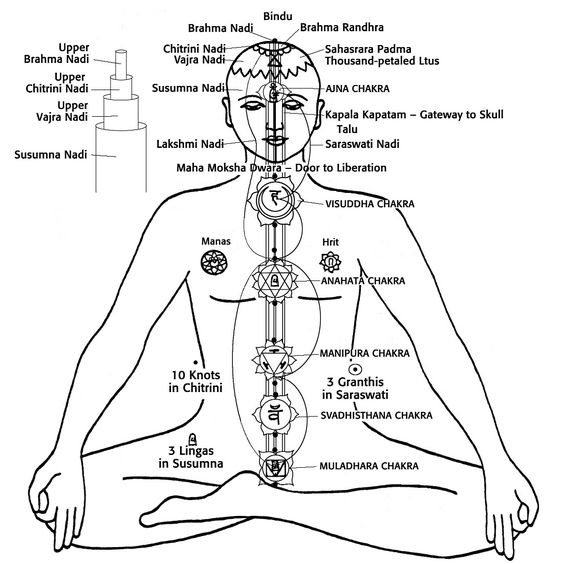 After the upward journey of Kundalini, coursing through the Sushumna channel and the chakras along the way, it is finally brought to the crown chakra, Sahasrara. This union is the Realization of the Absolute and is the meaning of Yoga.From the Ajna chakra at the eyebrow center, the journey is up the brahma nadi, an extension of the Sushumna channel. This may be first experienced in the dark field of mind as a black object, lingam, circle, or tunnel entrance. Along the journey to the Sahasrara chakra at the crown of the head (also known as the thousand-petalled lotus or Brahmarandra), there are other chakras, bindus (points), and levels of consciousness that are encountered and transcended. To go through these levels (called piercing the bindu) can seem like explosions or crashing through walls. If awareness does not stop at one of these points along the way, it comes to the union of the individual and the Absolute.

There is no longer an unconscious:

Once the Kundalini Shakti attains the state of union with the pure consciousness at the sahasrara, there is no longer any unconscious during that time. There is no longer a latent aspect, as full illumination has come, eliminating this polarization of active and latent. Awareness of the body and the external world is withdrawn into the highest samadhi.

The body is in mind; the mind is not in body

One comes to see in experience the truth that all of the body is in the mind, but that not all of the mind is in the body, as it usually seems. To the external view of other people, the body of one in this heightened state of union may appear to be dead. It may be cold to the touch, and there may be no perceptible vital signs, such as a pulse. The body continues to function so that it might be used again after the individuality returns.

The process towards realizing and abiding in pure consciousness is one of evolution. The involution of consciousness into the human being is conceptualized as being a process of the creative energy of Shakti condensing further and further into solid form, and falling asleep at the first chakra, at the perineum near the base of the spine. The process of Kundalini Awakening reverses this involution until the full potential of the human is realized in the return to the pure consciousness.

Pushing or pulling the Kundalini

With the goal being the merging of Shiva and Shakti, the latent with the creative, there are two general approaches. Most of the work with Kundalini Awakening, both the preparation and the awakening itself, are done from the lower chakras. The process is one of awakening and pushing the energy upwards in one way or another. A more direct approach for those who are prepared is to pull the energy upward by working directly with the chakras between Ajna chakra (eyebrow center), and the subtler chakras between there and the Sahasrara (the crown chakra).

Five downward-pointing triangles symbolizing the feminine creative energy, or Shakti, intersect four upward-pointing triangles symbolizing the masculine creative energy, or Shiva. This generates 42 triangles arranged (in the pyramidal form called Meru in India) in layers of eight, ten, ten & 14 triangles. They surround a downward-pointing, central triangle whose corners denote the triple Godhead, or trimûrti, of Shiva, Brahma & Vishnu. Eight lotus petals are symmetrically arranged in a circumscribing circle and 16 lotus petals are likewise arranged in a larger circle. Surrounding the triangles and petals are three circles equally spaced apart. They are enclosed in a square with “doorways” in the middle of each side. There are planes (as shown on page 1), pyramidal (see here), and spherical forms (see here) of the Sri Yantra. In India, there are even temples with its architecture. The Vidyashankara temple at Sringeri in India claims to possess the oldest known form of the Sri Yantra.

The power of the tetractys is such that it can transform two joined triangles into an object that is equivalent to the famous Sri Yantra! Here is how the simplest triangle is revealed by its construction from tetractyses to be equivalent to half the Sri Yantra. The latter cannot, of course, be split into two halves that are exact mirror images of each other, unlike the yods in the two joined, Type B triangles in the inner Tree of Life. However, the isomorphism between the Sri Yantra and these triangles as outlined above is established through a one-to-one correspondence between yods and corners. It is unnecessary to this isomorphism that one sacred geometry should exhibit the same mirror symmetry as the other one.[4]

The human diploid number is 46, i.e., a male or female cell contains 46 chromosomes. There are also 46 bones in the human axial skeleton that exist as pairs in the left-hand and right-hand sides of the body 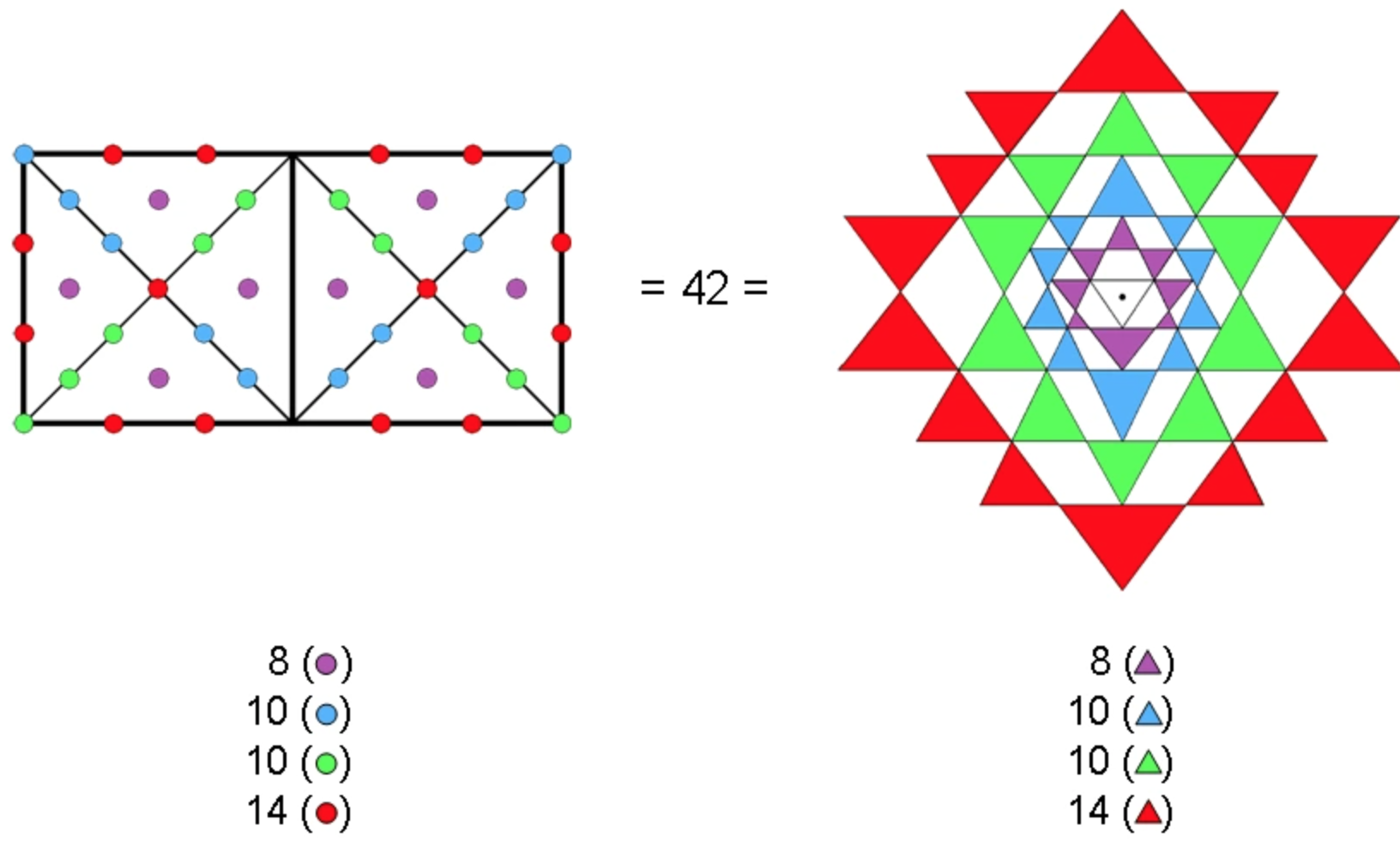 A pair of joined squares is analogous to the Sri Yantra. The 21 yods outside their shared side in the four Tetractyses of each square correspond to the 21 triangles in each half of the Sri Yantra. That this is not a mere coincidence is indicated by the fact that four classes of yods can be identified whose numbers are the numbers of triangles in the four layers of the Sri Yantra. This identification is unique in that no other choices of yods are possible that preserve the mirror symmetry of their distribution with respect to the root edge as a mirror.

87 corners of 43 triangles surround the centre (black circle) of the central triangle, above which hovers the bindu (black dot). 87 is the number value of Levanah, the Mundane Chakra of Yesod, which is the penultimate Sephirah of Construction. The 3-dimensional Sri Yantra constitutes a system of 89 points when the centre of the central triangle is included. The number 89 is the 11th member of the well-known Fibonacci sequence:

All the Fibonacci numbers up to 89 measure various sets of points that shape the geometry of the 3-dimensional Sri Yantra. If these sets had been created by a highly contrived selection of points, there would, obviously, be no significance to this pattern of Fibonacci numbers in the Sri Yantra because of the lack of underpinning of these points by its geometry. But this is not the case here. The first 11 Fibonacci numbers are compounded from corners of complete sets of triangles in the layers, not from bits and pieces of them cherry-picked to generate the right numbers. The correlation between these numbers and the geometrical features of the Sri Yantra that underpin them is natural, not artificially contrived.

When all the 43 triangles are Type A, the centers of the 42 triangles surrounding the central one become added to the 89 points, generating 131 points, where 131 is the number value of Samael, the Archangel of Geburah. Each Type A triangle has 15 hexagonal yods so that the number of hexagonal yods in these 42 triangles = 42×15 = 630. Alternatively, Table 6 in Article 35 proves that 630 yods line the boundary of the 126 Tetractys that make up the 42 Type-A triangles surrounding the central triangle. This is the number value of Seraphim, the Order of Angels assigned to Geburah. Notice also that, as the tips of six of the 14 triangles in the fourth layer touch the circle circumscribing the base of the pyramidal Sri Yantra, (42−6=36) of the 42 triangles do not touch it. The value of ELOHA, the God-name of Geburah, is 36.[4] 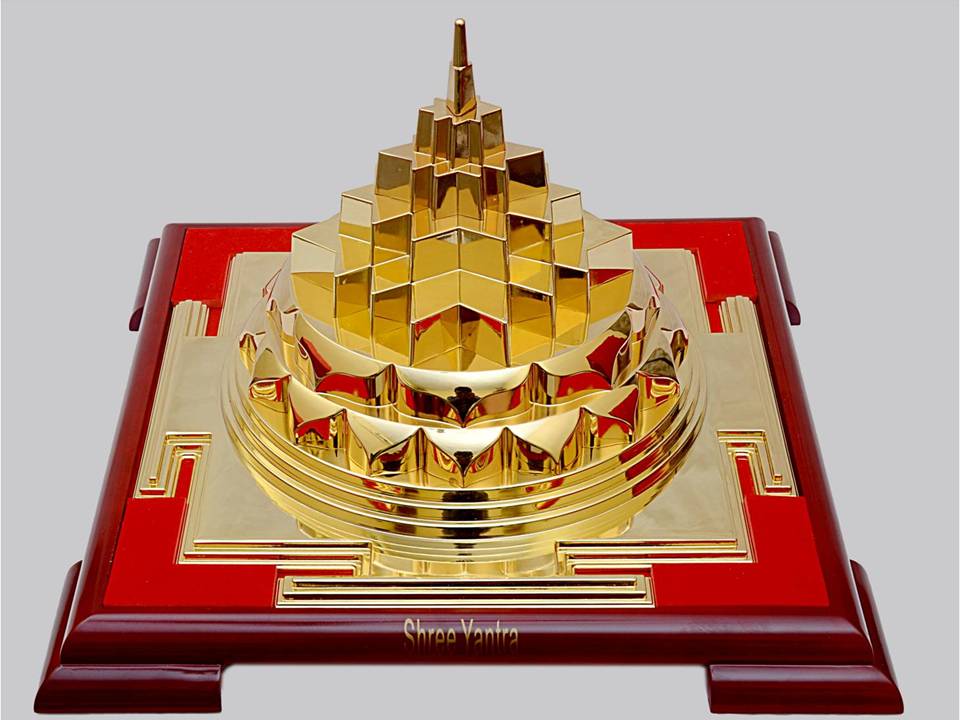