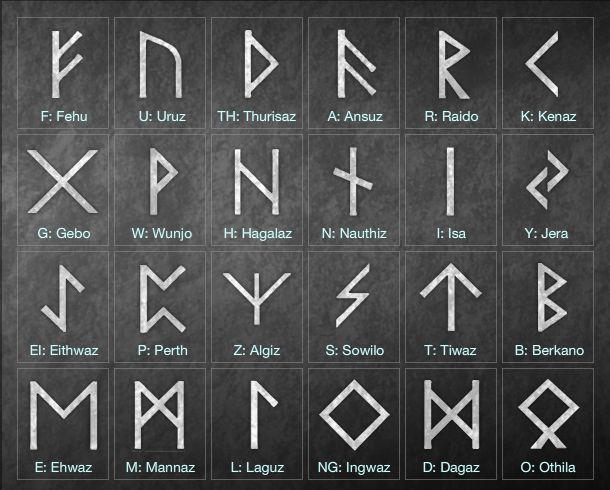 Runes are the letters in a set of related alphabets known as runic alphabets. Runes were used to write various Germanic languages before the adoption of the Latin alphabet and for specialised purposes thereafter. In addition to representing a sound value (a phoneme), runes can be used to represent the concepts after which they are named (ideographs). Examples of this are often referred to as Begriffsrunen by academics. The Scandinavian variants are also known as futhark or fuþark (derived from their first six letters of the alphabet: F, U, Þ, A, R, and K); the Anglo-Saxon variant is futhorc or fuþorc (due to sound-changes undergone in Old English by the names of those six letters).

Magical or divinatory use

The stanza 157 of Hávamál attribute to runes the power to bring that which is dead back to life. In this stanza, Odin recounts a spell:

I know a twelfth one
if I see up in a tree,
a dangling corpse in a noose,
I can so carve and colour the runes,
that the man walks
and talks with me.

The earliest runic inscriptions found on artifacts give the name of either the craftsman or the proprietor, or sometimes, remain a linguistic mystery. Due to this, it is possible that the early runes were not used so much as a simple writing system, but rather as magical signs to be used for charms. Although some say the runes were used for divination, there is no direct evidence to suggest they were ever used in this way. The name rune itself, taken to mean “secret, something hidden”, seems to indicate that knowledge of the runes was originally considered esoteric, or restricted to an elite.

The Elder Futhark, used for writing Proto-Norse, consists of 24 runes that often are arranged in three groups of eight; each group is referred to as an Ætt (Old Norse, meaning ‘clan, group’). The earliest known sequential listing of the full set of 24 runes dates to approximately AD 400 and is found on the Kylver Stone in Gotland, Sweden.

Most probably each rune had a name, chosen to represent the sound of the rune itself. The names are, however, not directly attested for the Elder Futhark themselves. Germanic philologists reconstruct names in Proto-Germanic based on the names given for the runes in the later alphabets attested in the rune poems and the linked names of the letters of the Gothic alphabet. For example, the letter /a/ was named from the runic letter Runic letter ansuz.svg called Ansuz. An asterisk before the rune names means that they are unattested reconstructions. The 24 Elder Futhark runes are the following:

Runes are popular in Germanic neopaganism, and to a lesser extent in other forms of Neopaganism and New Age esotericism. Various systems of Runic divination have been published since the 1980s, notably by Ralph Blum (1982), Stephen Flowers (1984, onward), Stephan Grundy (1990), and Nigel Pennick (1995).

The Uthark theory originally was proposed as a scholarly hypothesis by Sigurd Agrell in 1932. In 2002, Swedish esotericist Thomas Karlsson popularized this “Uthark” runic row, which he refers to as, the “night side of the runes”, in the context of modern occultism.