Of all the names of God in the Old Testament, that which occurs most frequently is the Tetragrammaton, appearing 6,823 times according to the JewishEncyclopedia.com. According to Biblica Hebraica and Biblica Hebraica Stuttgartensia, the original texts of the Hebrew Scriptures, written in both Hebrew and Aramaic, contain the Tetragrammaton 6,828 times. It is evident that the Tetragrammaton was used very extensively in original language, ancient Hebrew and Aramaic texts. This indicates a much more personal reference to the special identity of the Almighty (as opposed to impersonal titles such as “God” or “Lord”), on the part of the Bible writers. Many Bible scholars view this as evidence that the Bible writers (and indeed, likely the ancient Hebrew and Israelite people) viewed the Name represented by the Tetragrammaton as very important, and commonly used it in their everyday speech and prayers. And, for those that believe the Bible was inspired by God, it shows how he felt about his own personal name.

In Judaism, the Tetragrammaton is the ineffable name of God, and is not pronounced. In reading aloud of the scripture or in prayer, it is replaced with “Adonai” (“my Lord”).

According to one Jewish tradition, the Tetragrammaton is related to the causative form, the imperfect state, of the Hebrew verb הוה (ha·wah; become); meaning “He will cause to become” usually understood as “He causes to become”. Compare the many Hebrew and Arabic personal names which are 3rd person singular imperfective verb forms starting with “y”, e.g. Hebrew Yôsêph = Arabic Yazîd = “He [who] adds”; Arabic Yahyâ = “He [who] lives”.

Another tradition regards the name as coming from three different verb forms sharing the same root YWH, the words HYH haya [היה]: “He was”; HWH howê [הוה]: “He is”; and YHYH w’yihiyê [יהיה]: “He will be”. This is supposed to show that God is timeless. Other interpretations includes the name as meaning “I am the One Who Is.” This can be seen in the traditional Jewish account of the “burning bush” commanding Moses to tell the sons of Israel that “I AM has sent you.” (Exodus 3:13-14) Some suggest: “I AM the One I AM.” This may also fit the interpretation as “He Causes to Become.” Many scholars believe that the most proper meaning may be “He Brings Into Existence Whatever Exists.”

In Kabbalah, the cosmological structure of Creation is defined according to two interdependent numerical structures; the Tetragrammaton, being the expansion of zero into four, and the Tree of Life, defined by the numbers one to ten. The key concept fundamental to an understanding of both is that they are evolutionary in structure and sequence. Both the formulae of the Tetragrammaton and the Tree of Life communicate the process by which the Creator manifested general spiritual Substance, and then, through an evolutionary sequence, condensed this substance into specific material Form. These terms, “Substance” and “Form”, are essential, and are applicable to each stage in the sequences of both the Tetragrammaton and the Tree of Life. In these sequences, each stage gives Form to a Substance represented by the stage preceding it.

God, existing in His essential and absolute Unity, is exalted and distinct from material manifestation. As such, He is considered as a “fifth state” existing “behind” manifest Creation. This “fifth state” is the Source from which the four letters or phases of the Tetragrammaton are projected. This concept implies a direct relationship between the four letters of the Tetragrammaton and the four elements of classical philosophy, which, in turn, correspond directly to the four states of matter in modern physics. These four elements are Fire (energy), Water (liquids), Air (gases), and Earth (solids). These are the four distinguishable manifestations of the “source-substance” which Pythagoras termed “Quintessence”. In Latin writings, “quinta essentia” literally means “fifth substance”. 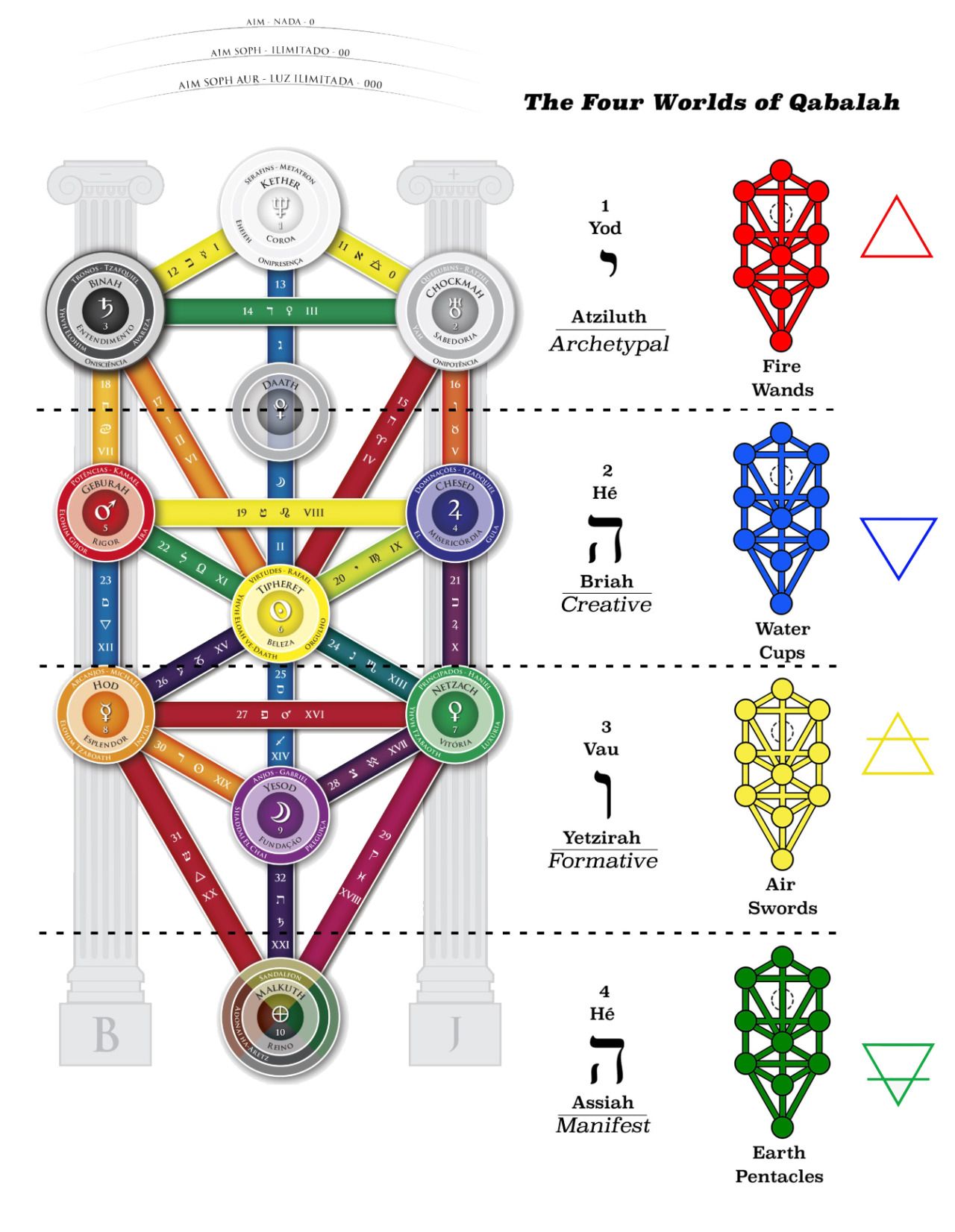 Fire, which corresponds to Yod, the first letter of the Tetragrammaton, also corresponds to the soul of humanity, the element of spirituality which resides within us. This element motivates us to strive for exalted degrees of consciousness and action, and it motivates us to become close to the Divine. Positively, the qualities of Fire manifest as will, inspiration, nobility of deeds, and the motivation and power to achieve honor, prestige, dominion, and leadership. Negatively, these last qualities become pride, egotism, despotism, and tyranny, as opposed to deserved authority. In a literal sense, Fire is the provider of warmth and light, but uncontrolled is the most destructive of the elements.

Water corresponds to Heh, the second letter of the Tetragrammaton, and corresponds to the desires of humanity, the passions which shape and direct the will towards specific ends and goals. This concept is most obviously manifest as human emotions. Philosophic Water represents the qualities of passivity, receptivity, flexibility, and dependency, which are the qualities of emotion and desire, because emotion and desire are totally dependent on outside influences. Philosophic Water has no inherent power of its own, except as the conductor and transformer of another. Alone, the element of Water is barren; life did not manifest in seawater without the catalysts of heat and light, which are qualities of the element of Fire.

Obversely, when brought to bear on the element of Fire, Water becomes very powerful and important. Fire, in and of itself, is very chaotic and amorphous. It is the qualities of Water that make it possible to contain and control Fire. Without these “Watery” qualities, Fire would run rampant in a destructive rage and then burn itself out. It is Desire (water) which shapes, sustains, and directs the Will (fire) towards practical ends. Thus, Fire and Water are interdependent for any creative act. This fact is the basis of their relationship to the Tetragrammaton.

Air corresponds to Vav, the third letter of the Tetragrammaton, and also to human intellect. The powers of analysis and synthesis, which constitute the intellect, are the abilities to break down a subject into it’s basic components in order to understand it’s structure (and, hopefully, it’s purpose), and then to reconstruct these components into something new, and – possibly – better. Thus, Air represents the qualities of reason and rationality. Positively, these are directed towards constructive applications and new inventions. But, devoid of the creative guidance of the qualities of Fire and Water, intellect, as the power of division, becomes a very destructive force. It has well been seen in our time that, devoid of higher ideals, science, laws, and politics become – at best – sterile of any worth or meaning. Unfortunately, the worst is more often manifest as war, pollution, infringement of basic human rights, and weapons technology that has advanced far beyond our ability to rationaly control, much less use.

Earth, the final Heh of the Tetragrammaton, manifests in humanity as the physical body, as well as that which is needed to sustain the body, such as food and shelter. Earth is also the literal Earth, the soil in which our food grows, as well as the globe which is the home and environment of the human community. Like Water, Philosophic Earth is barren and sterile in and of itself. It’s value is completely dependent on how it expresses and is influenced by the “higher” elements. For example, the actions of the human body can only be judged and evaluated according to how well they express or effect the spiritual will (Fire), the passions (Water), and/or the intellect (Air). Thus, money, the most obvious example of material power, is not inherently evil. It is simply a tool of convenience, like a knife or a match, and one can only judge the value of how it is used.

This is a basic summary of the qualities of the philosophic elements of Fire, Water, Air, and Earth. Anthropomorphically, Earth corresponds to the physical body which is the vehicle of human consciousness. The consciousness itself consists of three fundamental parts: the intellect (Air), which is subject to the influences of the passions (Water), which are, in a very real sense, the physical manifestations of the strivings of the spiritual will (Fire). The correspondence of these four elements to the Qabalistic formula of the Tetragrammaton becomes a complex structure of

In his book “Tree of Life” Israel Regardie elaborates on the tetragrammaton as follow:

“The formula of Tetragrammaton is also applied to the Four worlds, and the primordial four elements. To the Archetypal world the letter ” Y ” is given. Hence the Archetypal World is the Father, the all-begetter, the all-devourer of the worlds. The ,’ -Y ” also represents, in this instance, the element of Fire, showing forth the fierce, active, spiritual nature of the Father. The ” H ” primal of the Tetragrammaton is allocated to the Creative World to which, being receptive and passive, the element of Water pertains. This plane represents the Mother who, before the Son can be given birth, awaits the creative energy and the influx of divine life from the Father. The Formative World is assigned to the letter ” V,” the Son, and the latter, like the Father, is active, male and energetic ; hence the element Air is the attribution. Completing the divine name is a second ” H,” this letter being similar to the Mother, passive and inert, receiving whatever influences are poured into her. ” H ” is called in the Book of Splendour, the King’s Palace, and the Daughter, representing the Physical World, which is the synthesis of all the worlds.

He who knows the correct pronunciation of  YHVH called the Shem ha-Mephoresh, the Unpronounceable Name, possesses the means of destroying the universe, his own particular universe, and hurling that individual consciousness into Samadhi. Moreover, the magical theory has it that the vibration set up by the human voice has the power not only of moulding the plastic substance of the Astral Light into variegated shapes and forms depending upon the tone and volume, but also of compelling the attention of metaphysical entities and Essences to that mould.” 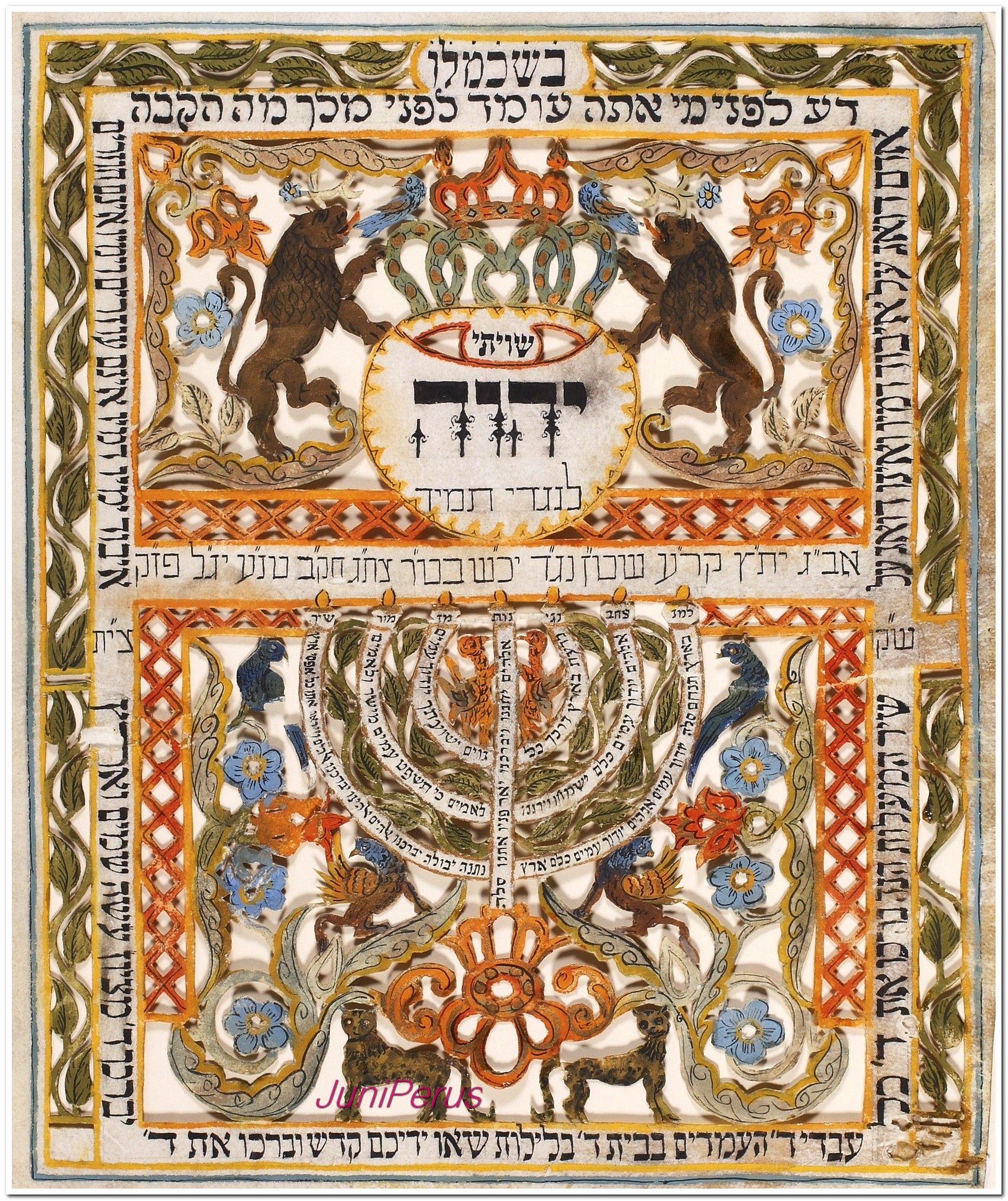