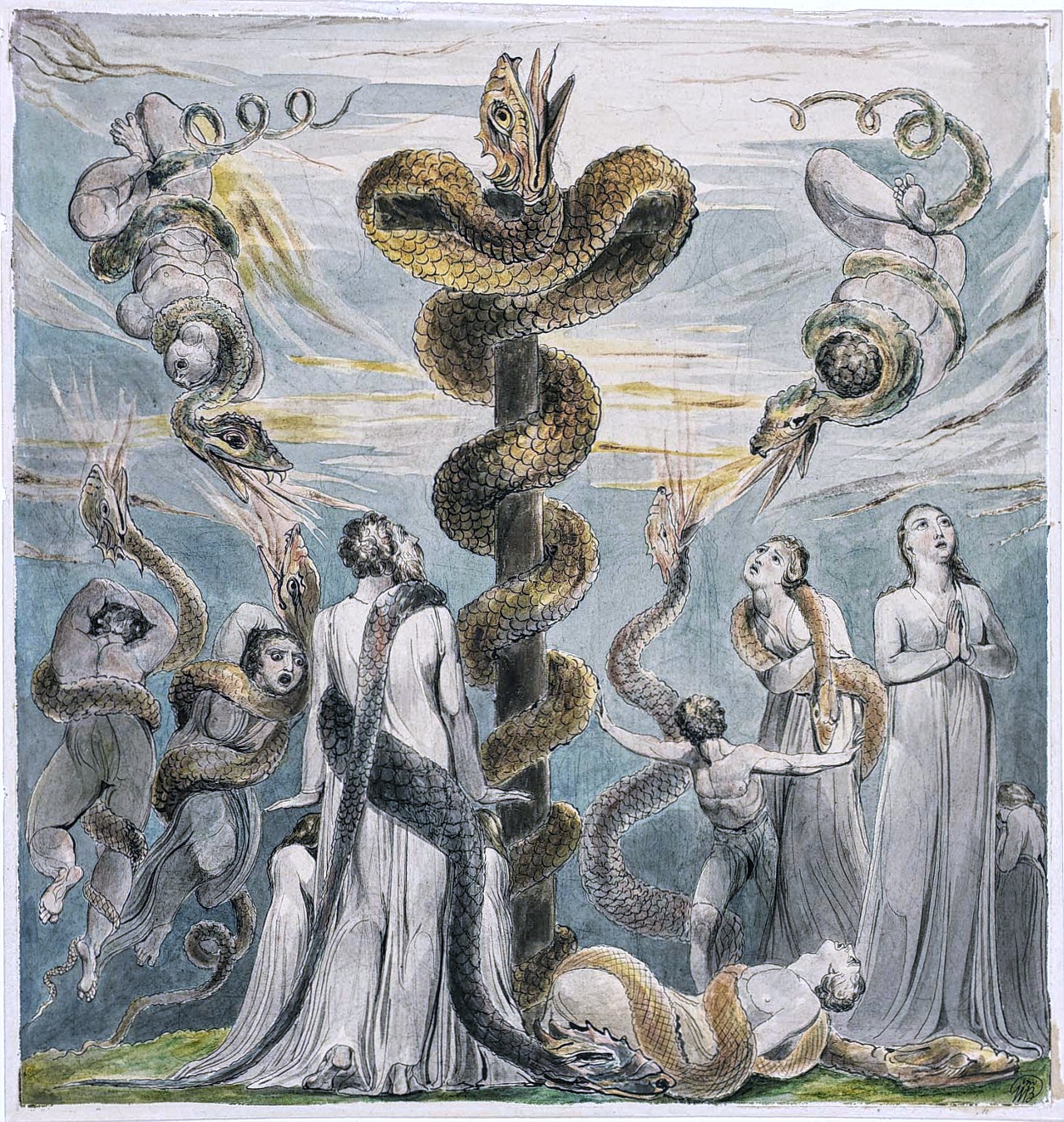 For countless ages the wand has been used as a symbol of the mystic arts. Far back in Egypt and Chaldea the magicians of the temples carried with them the staffs of their arts, consecrated upon the altars of their gods, and frequent references are made in the Bible to the wands or rods of Aaron and Moses and of the magicians of Egypt. In the New Testament we find mention of the reed by which the Temple was measured, and we are also told that the Christ was a branch of Jesse. In the accompanying illustrations we see three wands or staffs which are now but relics of supposedly forgotten superstitions. Figure A represents the wand which in children’s fairy stories performs strange and wonderful marvels when in the hands of elves and fairies. It is best described as a long ebony stick with a fairy star at the upper end. Modern magicians use this wand in their performances, omitting the star. Sometimes these wands are of plain wood (about fifteen inches long), while the more elaborate ones have metal or ivory tips. The stage magician of today little dreams that he carries one of the most sacred symbols in all the world, for the key to the meaning of the magic wand has been lost. The staff is symbolical of the spinal column of man, and this is the true wand of the magicians: for it is through the power within this column that so-called miracles are performed. The star of light at the upper end of the staff is nothing more nor less than the flame that burns eternally at the upper end of the lamp of the true alchemist. This tiny flame is fed by the pure oil of the transmuted life force. 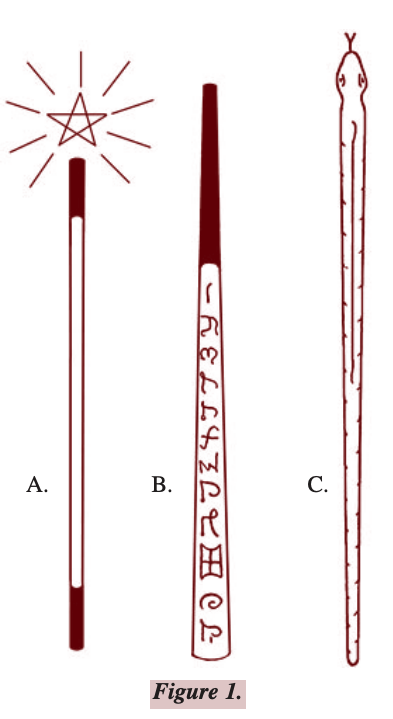 Figure B shows us a wand that is said to have been used by Solomon, the king of the Israelites. and upon it are inscribed in the celestial languages sacred names and words. This drawing is taken from “The Keys of Solomon, the King,” a rare manuscript in the British Museum. It bears the same symbolism as the first, representing a hollow tube through which the forces of life play in an ascending and a descending stream. Figure C shows us still another type of wand, this one made to represent a snake. It is said that during the Middle Ages when magic and sorcery rose to a tremendous height, strange rites and rituals were performed under the direction of hierophants, who carried this snake wand made of flexible wood; during the ceremony, the wand was bent, and the tail of the snake was placed between its teeth. The serpent has for thousands of years been the symbol of the spirit fire in man, which was known to the ancients as the serpent power. With this slight introduction, we will take up the study of the wands and serpents as we find them in the Bible. First, let us consider the serpent of Genesis. We have gone over a number of famous paintings where the Fall of Man was the theme, and in nearly every case the snake is represented as coiled around a tree, head downward. In the majority of cases the artist probably did not understand the mystery he portrayed, but in reality the downward-turned serpent is the key to the problem. The serpent of Genesis is the down-going spinal fire, sent thus by Jehovah to build form. The result of the going downward of this force was crystallization and the awakening of the passion centers located at the base of the spine. This crystallization so lowered man’s vibration that he was no longer able to remain in the etheric Eden but was cast out or fell, and the sword of passion (the flame of purification) stood between him and the world from which he fell. In the same way man’s life today is a contest between the higher and lower principles. When the spiritual powers are centered in emotion and passions, man starts into action the force that inevitably results in crystallization and death. But when he lifts them up through altruism and service, the spiritual fire flows upward and creates the five-pointed star which heralds the coming of Christ within himself.

That which tends at our stage of evolution to draw these powers downward through selfishness and egotism is on the path of the black serpent, while the traits within ourselves in which altruism predominates raise the spirit powers upward through the white serpent and finally liberate the spiritual consciousness. Now let us consider the story of how the rods were turned to serpents in the court of Pharaoh, as we find it recorded in the 7th chapter of Exodus: “And Moses and Aaron went in unto Pharaoh, and they did so as the Lord had commanded; and Aaron cast down his rod before Pharaoh, and before his servants, and it became a serpent. Then Pharaoh also called the wise men and the sorcerers: now the magicians of Egypt, they also did in like manner with their enchantments. For they cast down every man his rod, and they became serpents, but Aaron’s rod swallowed up their rods.” For many generations Egypt had stood for black magic and evil. This is in accord with occult teachings, for we know that the ancient Egyptians were the remnants of the still older Atlanteans, and that Atlantis sank because black magic had supplanted the white forces, and the Great Ones who were guiding the destinies of men were forced to take those who remained true out of the world of darkness and onward to the promised land. The serpent of the black magicians of Egypt, called up by invocation and through negative processes, represents the lower passions and desires with which the black forces are even today filling the world through the medium of thoughtless persons who allow their emotions and desires to master them. The serpent of Aaron, developed as commanded by the Lord, corresponds to the white serpent or transmuted spirit fire, the wand of the initiate which eats up (transmutes rather than kills) the lower forces of the black magicians. In Kundry, that wonderful character in the opera of Parsifal, the girl dressed in the skins of snakes, we find another symbol of the serpent power or spirit fire, for the word Kundry is evidently taken from Kundalini, which means a sleeping serpent. While undeveloped or under the spell of evil it serves the black forces, but when transmuted it is true to the Knights of the Grail. There came a time when it was necessary for man to lift the spiritual consciousness which had been sent downward to develop form, and this we find explained in the story of the brazen serpent which Moses raised up in the wilderness.

In Figure 2 we see an ancient alchemic drawing which represents this serpent of Moses. The ancient Hebrew word used to signify a serpent in this part of the Bible can also be translated savior. There is a connection between this serpent which was raised, and the Christ principle which is represented by the crowned serpent. From the standpoint of the occult student there is probably no more important explanation of spiritual unfoldment than that of the rod that budded. It is said in some of the ancient books that the rod of Aaron, like the spear of Odin, was cut from the Tree of Life. Now let us consider the Tree of Life. It is that great tree which is said to have its roots in heaven and its branches upon the earth. When we study this carefully we find that man is the rod of Aaron, which was cut from the Tree of Life when his connection with the higher worlds was severed that he might better learn the lessons of individual responsibility. The student who does not seek to carry his own burdens but tries to find others to do his work for him is losing the great opportunity of learning these lessons. Man in his fallen state is symbolized by the dead stick in which the germ of life is too weak to manifest. We know how in the early fall the sap of the tree goes to its roots and the tree appears dead. It was the same with primitive man, for his life forces were sent downward, and the staff cut from the Tree of Life, as far as its spiritual development was concerned, was dead. But when the Christ Spirit became indwelling in the earth, man began turning his egotism to altruism, and by the power in his own life is helping to lift the spirit fire upward, contacting one by one the spiritual centers in the body. It nourishes them, and one by one the blossoms on the dead staff burst forth. One by one the seven centers are awakened and become blossoms. The blossoms on the rod of Aaron correspond to the roses on the Rose Cross or the lotus blossoms of the East. As told in Tannhauser, when these flowers blossom forth we know that our sins have been forgiven. Many students of occult philosophy wonder why the Great Ones do not come to them. This is not because of neglect. These students do not understand the mystery of the rod that blossoms and do not know that the higher ones on the invisible planes are watching breathlessly for those whom they can use for the betterment of humanity; that the way by which they identify the purified candidate is not through his words but by the blossoms on his staff or cross. These spiritual centers, when awakened by right thinking and right action, are lights by which our development is judged. The reason we do not attract the higher ones is that there are no roses on our cross, and they know our purification is not complete. In the same way the black forces tell by our negative development, which is the reverse of the positive, when we are in a position to be of service in the work of destruction. When we realize that we are the staff and that our own development is the rod on which we must lean, then we better understand the miracles performed by those who have raised the brazen serpent in the wilderness. When we realize that it is the serpent power which brings to the brain the vital energy with which we think, we also realize what Christ meant when he said, “Be ye wise as serpents”; and we also understand why Christ was symbolized in the ancient mysteries as a serpent coiled around a staff, head upward. So let us go through life with a firm resolve to so live that the rod within ourselves, cut from the Tree of Life and depending upon us for its development, will flower with the spiritual blossoms that tell of Mastership.