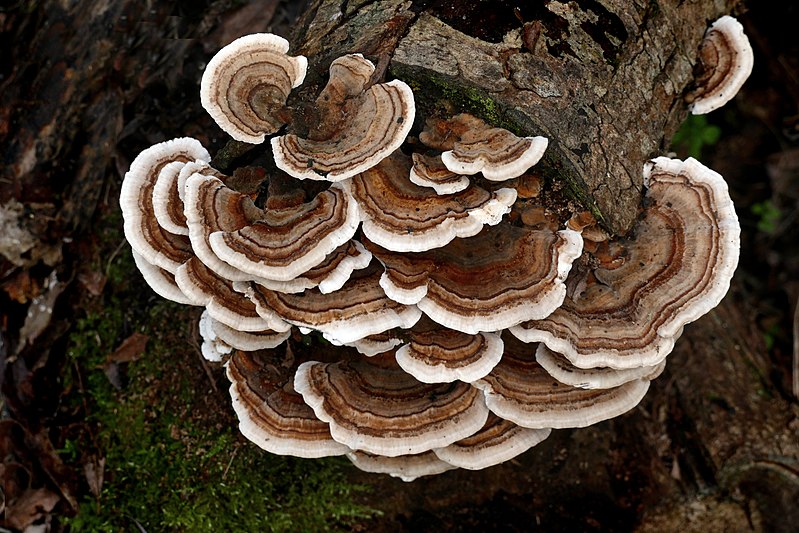 Trametes versicolor – also known as Coriolus versicolor and Polyporus versicolor – is a common polypore mushroom found throughout the world. Meaning ‘of several colors’, versicolor reliably describes this fungus that displays different colors. For example, because its shape and multiple colors are similar to those of a wild turkey, T. versicolor is commonly called turkey tail. A similar looking mushroom, commonly called false turkey tail, which is from a different order, may sometimes be confused with the turkey tail mushroom due to appearance. Another lookalike is the multicolor gill polypore. [1]

The fungus has been used in traditional Chinese medicine for many years to treat pulmonary diseases.[2][3] A purified hot water extract prepared from the cultivated fungal mycelium has been used in Japan for its immunomodulatory effects as an adjuvant treatment for cancer. Polysaccharide-K (PSK) or krestin, from the mushroom T. versicolor, is an approved mushroom product used for cancer treatment in Japan. PSK is a proprietary formulation from the Kureha Corporation. PSK has been used as an adjunctive cancer treatment in thousands of patients since the mid-1970s. The safety record for PSK is well established in Japan. Few adverse events have been reported in patients treated with PSK. Polysaccharopeptide (PSP) is another extract from T. versicolor produced in China.

Protein-bound polysaccharides, or PSPs, refers to the class of compounds abundant in certain mushrooms. PSPs are commonly used in East Asia as a nutritional intervention and biological response modifier. PSP from T. versicolor is a potent immunomodulatory that stimulates proinflammatory cytokines (ie, interferon-gamma, interleukin 2 [IL-2]), natural killer cell activity, T-cell proliferation, and activation of the complement system.9 At least 6 other polysaccharide fractions (all acidic heteropolysaccharides) have been isolated from the fruiting bodies of T. versicolor, with molecular weights ranging from 568 to 1,840 kDa, protein content of 3.9% to 8.5%, and various ratios of the monosaccharides mannose, rhamnose, glucuronic acid, glucose, and fructose; glucose was the predominant sugar (82.8% to 90.5%). More than 40% of the protein content of the crude mass was removed during purification. Bioactivity was associated with effects on molecular weight, protein content, and glucuronic acid amounts.(8) An extracellular polysaccharopeptide (ePSP) has also been prepared from fermented mycelia of the LH-1 strain of T. versicolor, which has a different composition than the intracellular PSP. ePSP is comprised mainly of polysaccharides and is 13.8% protein; its monosaccharide composition is mostly glucose (82.27 mg/g), galactose (8.67 mg/g), mannose (8.18 mg/g), and xylose (0.87 mg/g)

Like most modern medicinal products, Coriolus mushrooms can be consumed or applied in a variety of ways. Most of which involve some form of ingesting the mushroom, either via capsule or cooked whole mushrooms. Ingestion allows users to experience effects and benefits within six to eight hours.

The exact time it will take your body to digest the mushrooms depends on your biology. Some people have highly active metabolisms and will digest foods rapidly, while others have sluggish metabolisms that will take a long time to break things down.

Some may prefer to order raw Coriolus and boil it to make a tea. This method is perfectly safe and suitable, as long as the mushrooms are fresh or properly dried. It’s also important to buy mushrooms from a reputable supplier.

There are also a plethora of functional-mushroom-based supplements on the market as the popularity of these mushrooms rises. If you are a brand looking to formulate a new supplement with these mushrooms, make sure you do your research and choose a reputable supplier with high-quality extracts.

There are not many side effects associated with Coriolus mushroom consumption. Women who are pregnant, planning to become pregnant, or who are breastfeeding should consult with their doctor before taking any type of mushroom-based supplement.

Still, it is unlikely that consumers will experience any negative consequences when consuming Turkey Tail mushrooms. One of the greatest dangers here are allergies, so users should begin supplementation by consuming only small amounts. Still, final dosages are bound to vary from person to person.

During exhaustive exercise, malondialdehyde (MDA), the end product of lipid peroxidation, and other key biomarkers of oxidation (ie, glutathione peroxidase, superoxide dismutase) were reduced in the brain tissue of rats administered T. versicolor. The effect on MDA occurred in a dose-dependent manner, with the high-dose group experiencing a lower level of MDA. [4][5][6]

Because of its immunomodulatory effects, PSK is approved as a prescription drug in Japan for use in cancer treatment. Its antitumor activity is a result of its ability to induce maturation of dendritic cells, activate cytotoxic CD8+ T-cells and natural killer cells, and elicit the production of proinflammatory cytokines (ie, TNF-alpha, IL-1beta, IL-12).[7]

Antibiotic effects of C. versicolor has been described against S. aureus, S. enteritidis, and S. typhimurium.[8][9]