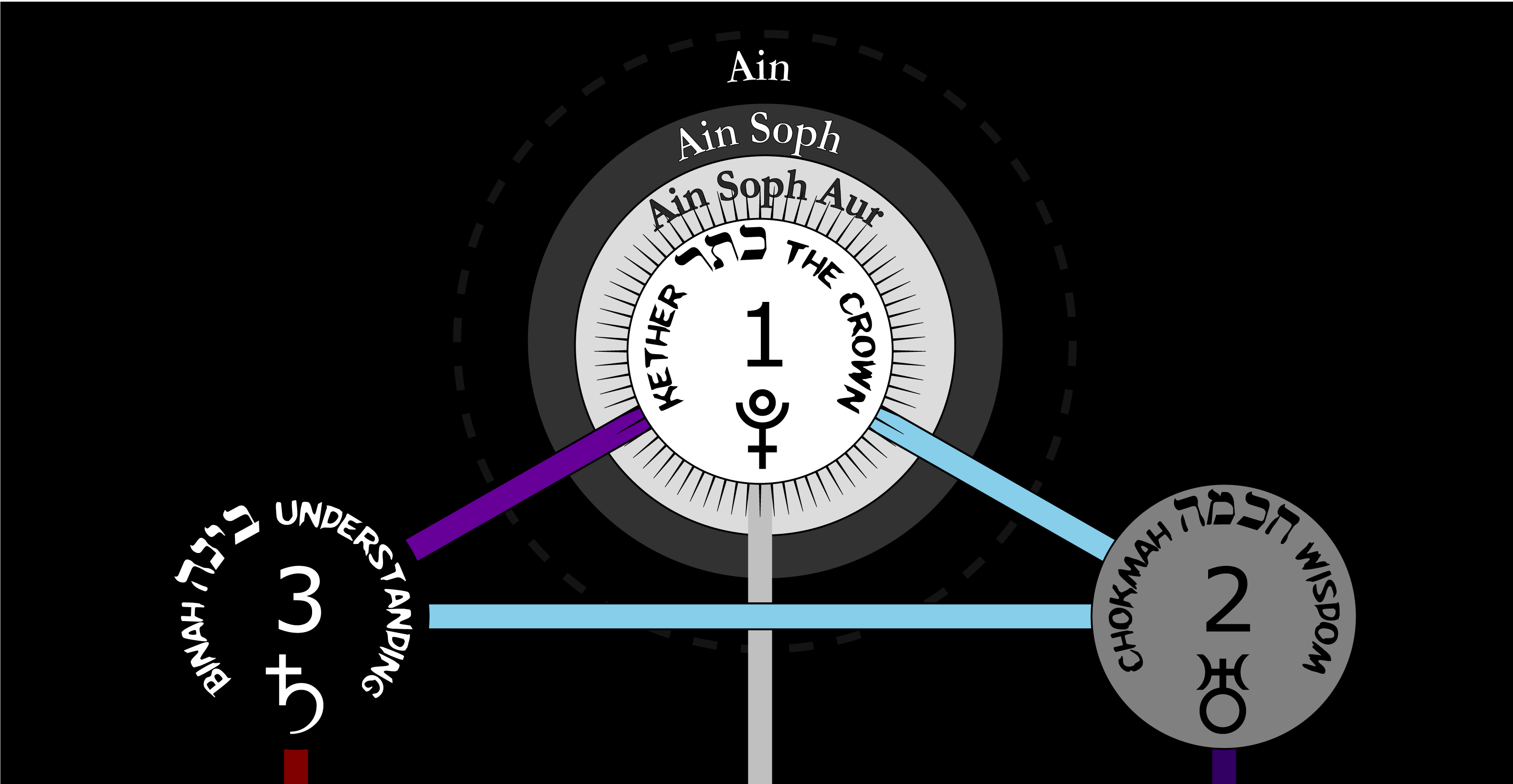 Within the mystical system of the Qabalah, the three Veils of Negative Existence are called: 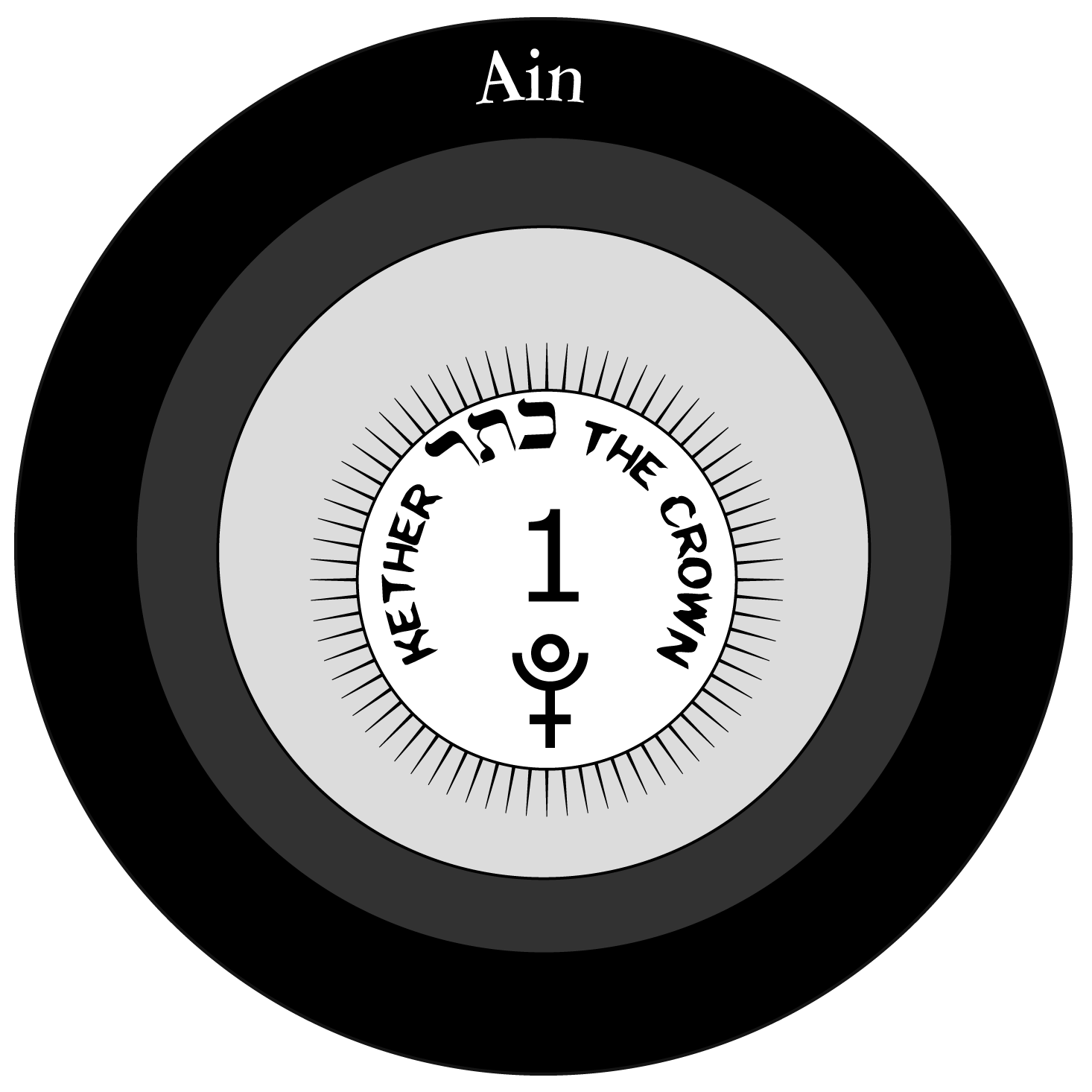 The most primordial quality attributed to the Veils is simply raw “Negation” that is the root of Non-Existence. Not just of physical forms, but neither of the ideas that characterize those forms, nor the concept of an idea, nor even the notion of what “to exist” means. In fact those dualistic notions all emerge from Kether, from Source Consciousness, so the idea underlying the Veils, and especially Ain, is the complete Inverse of Kether. Not the Qlippoth of Kether, but Kether’s other Countenance: the One eternally facing Night, that is Non-Experience and Unmanifestation through and through. 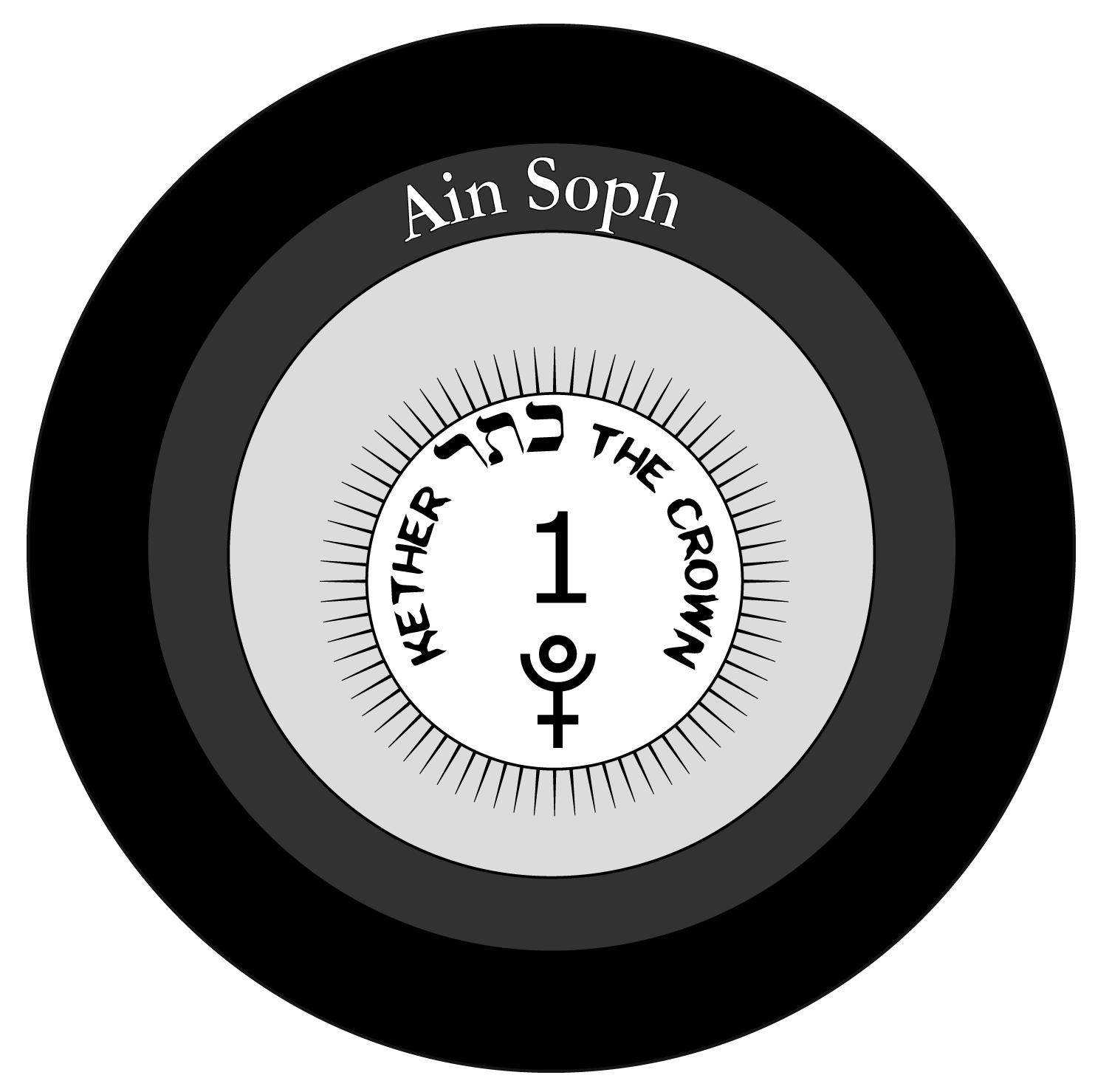 The second quality attributed to the Veils imparts upon the raw Nothing (the “No” of “No-Thing-Ness”) an idea of limitation that is infinitude: infinitely large and infinitely small. This precedes dualistic expression in Briah (The Mental Plane) and helps to establish the concept of duality by qualifying eternity and infinity. Thus the Negation is still “Null”, but it now has an additional attribution of being “No-Thing” qualified. This is a subtle and tricky concept to wrap the mind around, but it starts the ball rolling in terms of describing the subtle steps through which The Unmanifest starts to become the Manifest point of crystallized Consciousness in Kether. The start of that is to ascribe to “No” a distinction that limits Its Non-Self in a way. Unfortunately we need to deal with the limitations of language when describing the Causal Plane (Atziluthic) level of Consciousness that is Kether as well as when we try to formulate an idea of The Veils. This is because there is no Self at these primordial levels and it is far after the fact – causally – that we can start to formulate labels for the experiences had and for the reintegration of experience entirely. 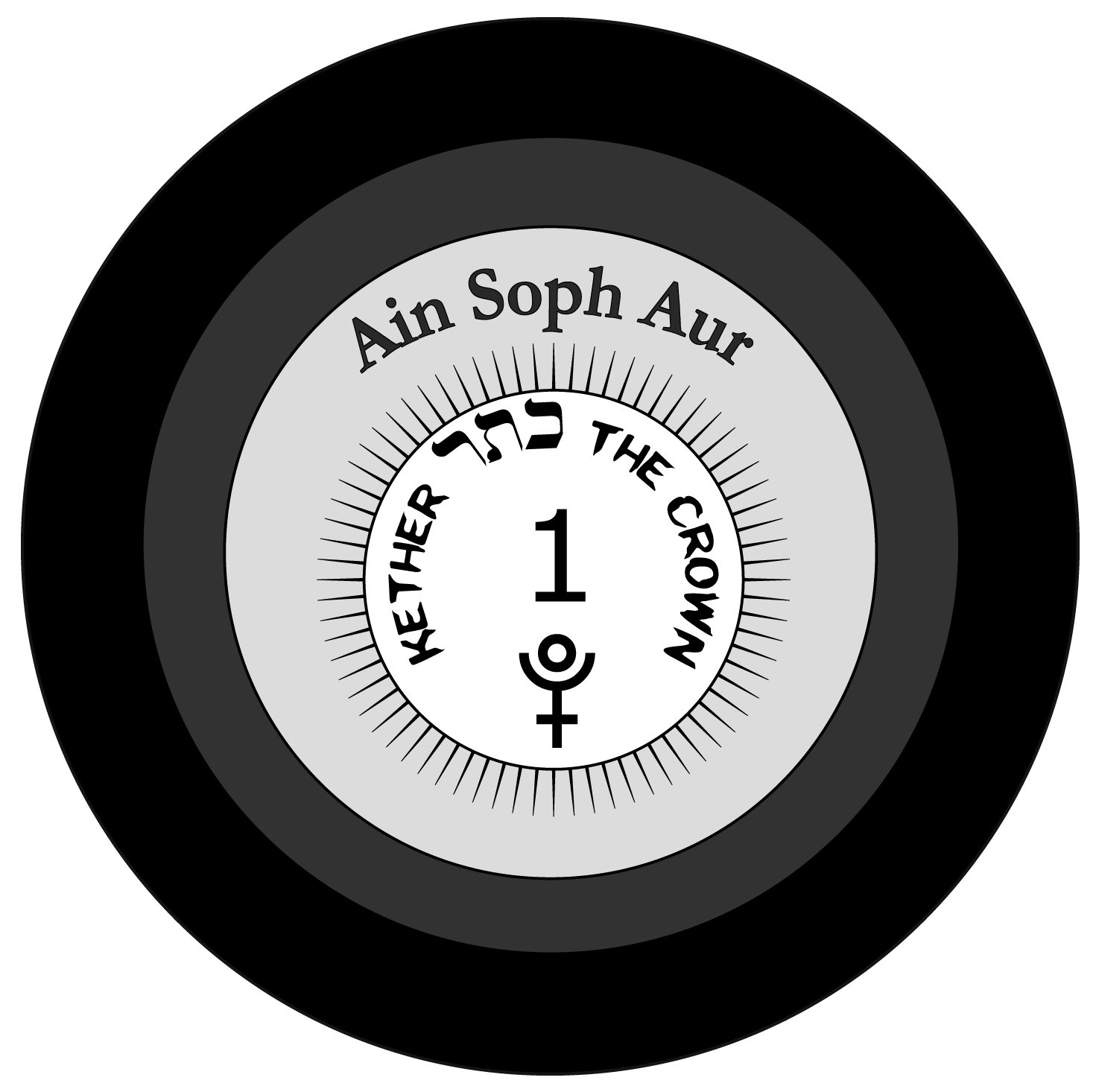 The third quality attributed to the Veils attempts to define the start of the process to crystallize a Point of Conscious Awareness in the Limitless Sea of No-Thing. This three-part aspect of the Unmanifest is why we use the term No-Thing-Ness to describe the Veils of Negative Existence. The emergence of Light from the Darkness is a recurring motif throughout myth and legend and this third aspect of the Veils illustrates the final part of the crystallization of Source Consciousness (Light) from the Sea of Non-Conscious Non-Experience. This tripartite process describing the crystallization of consciousness and the surrender of consciousness is related to enlightenment dynamics at its most profound as it mimics a process called The Three Doors through which enlightenment presents itself to the One. We discuss that a little more in the section on “Enlightenment Dynamics”, but it’s an interesting aside due to the relation to the three-fold method describing the Veils of Negative Existence.

Within, or beyond, these Veils is everything that is not. In a sense, they represent pre-existence, the state of all things before they make their initial manifestation in Kether, the first Sephira, or sphere of existence. In 777 [1] , Crowley quotes Samuel Mathers:

” There are three qabalistical veils of the negative existence, and in themselves they formulate the hidden ideas of the Sephiroth not yet called into being, and they are concentrated in Kether, which in this sense is the Malkuth of the hidden ideas of the Sephiroth. … [T]he limitless ocean of negative light does not proceed from a centre, for it is centreless, but it concentrates a centre, which is the number one of the Sephiroth, Kether, the Crown, the First Sephera; which therefore may be said to be the Malkuth or the number ten of the hidden Sephiroth. Thus “Kether is in Malkuth and Malkuth is in Kether.”

Crowley explains each veil in his essay “Qabalistic Dogma”:

First is Nothing, or the Absence of Things, אין [Ain], which does not and cannot mean Negatively Existing (if such an Idea can be said to mean anything) … Second is Without Limit אין סוף [Ain Soph] “i.e.”, Infinite Space. This is the primal Dualism of Infinity; the infinitely small and the infinitely great. The Clash of these produces a finite positive Idea which happens to be Light, אור [Aur]. This word [Aur] is most important. It symbolises the Universe immediately after Chaos, the confusion or Clash of the infinite Opposites. א [Aleph] is the Egg of Matter; ו [Yod] is Taurus, the Bull, or Energy-Motion; and ר [Resh] is the Sun, or organised and moving System of Orbs. The three Letters of [Ain] thus repeat the three Ideas.

It is very difficult to explain the Negative Veils, because they represent a reality (or lack thereof) that is, by definition, beyond human comprehension. Regardie expresses this is his Tree of Life [2] (p. 45):

“Since it does surpass all finite understanding, immutable and boundless as its expanses are to the human mind whose most profound speculation could not approach to the faintest adumbration of what It is in Itself, it must ever remain a mysterious emptiness—No-thing.”

Regardie goes on to say that the Ain Soph is neither Spirit nor Will, but rather the underlying condition or material for both, as well as being the ultimate cause of matter and force. Such things come into spontaneous existence from the Negative Veils because of what Regardie calls the Cyclic Law, which can be identified with the “Will to manifest.” This law states that the Light [Ain] is normally in a state of quiescence, moving in constant motion in a perfect circle, as an Oroboros. However, from time to time, the Light concentrates on itself and becomes polarized into Spirit and Matter. The mechanism for this process is unclear to Regardie, and he suggests that it is something that cannot be understood in any reasonable sense. But whatever the method, the result of the process is the concentration of Infinite Light in Kether.