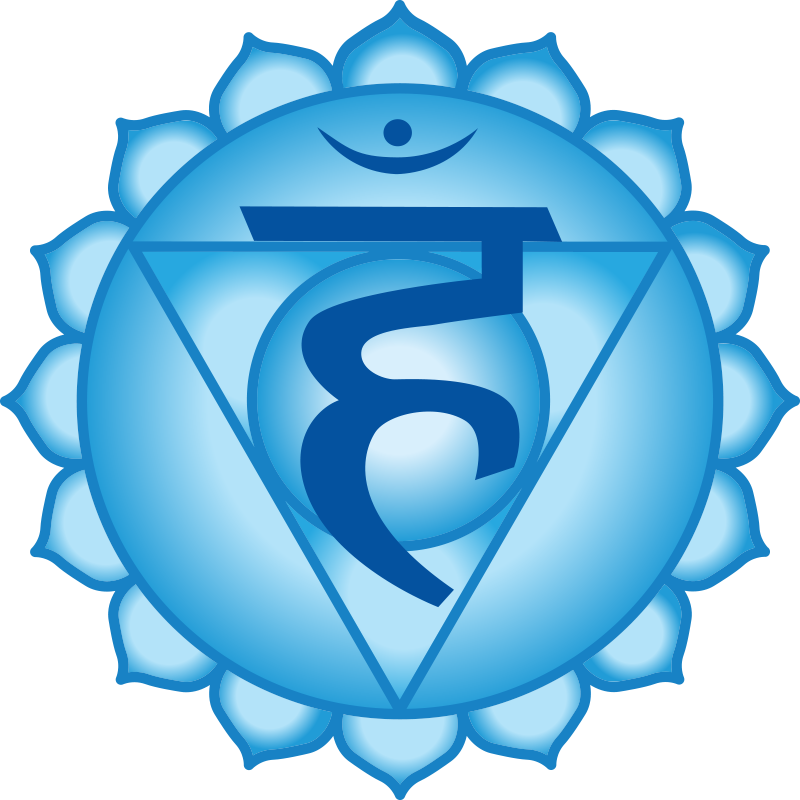 Visuddha (Also known Visuddhi) , the throat chakra, is located in the hollow of the throat. The thyroid and parathyroid glands are associated here, along with the vocal chords and the pharyngeal plexus. The name Visuddha means “purity.” The traditional color for this center is purple. An alternate color is gold.11 Its symbol is the akasha or black egg of spirit. The fifth chakra controls respiration, auditory functions, cleansing, sensations, intuition, perception, psychic ability, communication, creativity, and self-expression. It is a center of focus and direction. (Whenpsychc blockage occurs at this center,it is usually described as a feeling of being “all choked up” or having “a lump in the throat.”) Malfunctions of the thyroid, as well as speech and hearing disorders, are under the dominion of the fifth chakra. The essence of this center is associated with sound, particularly vibration. In yoga the Visuddha is a very important center of alchemical transmutation. It is also said to produce a secretion of immortality

Excessively open: Using speech as a mechanism of control

We are convinced that the seat of consciousness must be somewhere up in the head. We already have a more farsighted view in Anahata; we become aware of the puruüa. But we do not yet trust the security of psychical existence, so we have not reached viçuddha. We still believe in a material world built of matter and psychical force. And we cannot connect the psychical existence or substance with the idea of anything cosmic or physical. We have not yet found the bridge between the ideas of physics and psychology.

So if one speaks of Visuddha, it is of course with a certain hesitation. We are stepping into the slippery future right away when we try to understand what that might mean. For in Visuddha we reach beyond our actual conception of the world, in a way we reach the ether region.

We are trying something that would be more than Professor Auguste Piccard achieved!  He was only in the stratosphere—he reached something exceedingly thin, I admit, but it was not yet ether. So we have to construct a sort of skyrocket of very large dimensions which shoots us up into space. It is the world of abstract ideas and values, the world where the psyche is in itself, where the psychical reality is the only reality, or where matter is a thin skin around an enormous cosmos of psychical realities, really the illusory fringe around the real existence, which is psychical.

The concept of the atom, for instance, might be considered as corresponding to the abstract thinking of the Visuddha center. Moreover, if our experience should reach such a level, we would get an extraordinary vista of the puruüa. For then the Purusha becomes really the center of things; it is no longer a pale vision, it is the ultimate reality, as it were. You see, that world will be reached when we succeed in finding a symbolical bridge between the most abstract ideas of physics and the most abstract ideas of analytical psychology. If we can construct that bridge then we will have reached at least the outer gate of viçuddha. That is the condition. I mean, we will then have reached it collectively; the way will then be opened. But we are still a long distance from that goal. For viçuddha means just what I said: a full recognition of the psychical essences or substances as the fundamental essences of the world, and by virtue not of speculation but of fact, namely as experience.

Now, going from Anahata to Visuddha is quite analogous, but it goes very much further. You see, in Anahata thought and feeling are identical with objects. For a man, the feeling is identical with a certain woman, for instance, and for a woman with that particular man. The thought of a scientist is identical with such-and-such a book. It is such a book. So there are always external conditions, either for the feeling or for the mind. Thought is always specific—scientific, philosophic, or aesthetic, for example—because it is always identical with a particular object. And so the feeling is identical with certain people or things. It is because somebody has done so-and-so that one is angry because there are such-and-such conditions. Therefore our emotions, our values, our thoughts, our convictions are interdependent with facts, with what we call objects. They are not in themselves or through themselves. They are, as I say, interwoven with concrete facts.

You know, it is sometimes an ideal not to have any kind of convictions or feelings that are not based upon reality. One must even educate people, when they have to cross from Manipura to Anahata, that their emotions ought to have a real basis, that they cannot swear hell and damnation at somebody on a mere assumption, and that there are absolute reasons why they are not justified in doing such a thing. They really have to learn that their feelings should be based on facts.

But to cross from Anahata to Visuddha one should unlearn all that. One should even admit that all one’s psychical facts have nothing to do with material facts. For instance, the anger which you feel for somebody or something, no matter how justified it is, is not caused by those external things. It is a phenomenon all by itself. That is what we call taking a thing on its subjective level. Say somebody has offended you, and you dream of that person and feel again the same anger in the dream. Then I say, “That dream tells me just what the anger means, what it is in reality.” But you contend that the person had said such-and-such a thing, so you are perfectly justified in feeling such anger and assuming such an attitude toward him. Naturally, one is not inclined to admit such a possibility, but after a while, when the process of analysis is effective, it dawns upon one that it is most probably true. We are perhaps identical even with our own worst enemy. In other words, our worst enemy is perhaps within ourselves.

If you have reached that stage, you begin to leave Anahata, because you have succeeded in dissolving the absolute union of material external facts with internal or psychical facts. You begin to consider the game of the world as your game, the people that appear outside as exponents of your psychical condition. Whatever befalls you, whatever experience or adventure you have in the external world is your own experience.

This is only the fifth chakra, and we are already out of breath—literally, so—we are beyond the air we breathe; we are reaching, say, into the re- mote future of mankind, or of ourselves.