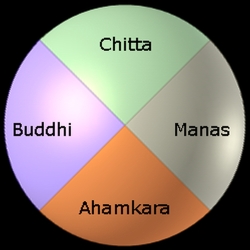 ahańkāra or ahamkara (Sanskrit: अहंकार) from aham (ego, I) + kara (maker, doer) from the verbal root kri (to do) — is the sense of “I-am-ness” the individual Ego, which feels itself to be a distinct, separate entity. It provides identity to our functioning, but ahańkāra also creates our feelings of separation, pain, and alienation as well. In its lower aspect, the egoistical and mayavi principle, born of avidya (ignorance), which produces the notion of the personal ego as being different from the universal self. ahańkāra is one of the four parts of the Antakarana (“inner conscience” or “the manifest mind”) and the other three parts are Buddhi (the intellect), Chitta (the memory) and Manas (the mind).

In Sankhya philosophy ahańkāra is the third emanation: from prakriti (primal nature or substance) issues mahat (the great), standing for universal mind, which in turn produces ahańkāra, selfhood, individuality; from ahańkāra come forth the five tanmatras, the subtle forms of the elements or principles and “the two series of sense organs” (Samkhya-Sutra 1:61).

In the Bhagavad-Gita (7:4), prakriti manifests in eight portions — “Earth, Water, Fire, Air, ether [space: kham-akasa], Manas (mind), Buddhi (understanding) and Ahańkāra (egoity, self-sense)” — all of which relate to the object side, which gives an erroneous sense of identity or egoity. As universal self-consciousness, Ahańkāra has “a triple aspect, as also Manas. For this conception of ‘I,’ or one’s Ego, is either sattwa, ‘pure quietude,’ or appears as rajas, ‘active,’ or remains tamas, ‘stagnant,’ in darkness. It belongs to Heaven and Earth, and assumes the properties of either”.

By identifying things and qualities in the world, ahankara enables the soul to relate itself to perceived objects. If the soul is founded in ignorance or avidya, then ahankara may lead itself to be separate from the divine. Paramhansa Yogananda has characterized the ego as soul attached to a body.