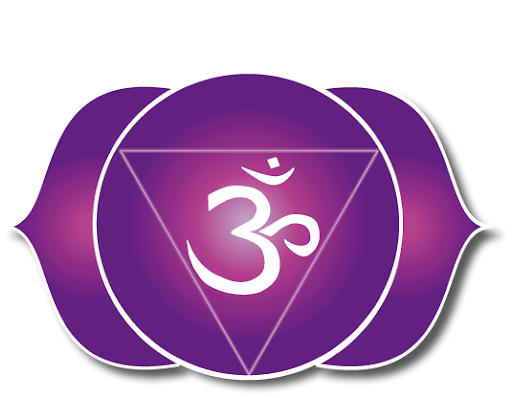 Ājñā, the brow or third eye chakra, is located in the forehead. It is associated with the pituitary gland (and the frontal lobes of the brain. The word Ajna means “order” or “command,” which indicates that activation of the chakra is indicative of true order and mastery. The traditional color here is translucent blue. An alternative color is white. Its symbol is a circle with two wings or petals, which correspond to two pituitary lobes and the two major nadis of pingala (right petal) and ida (left petal). This center controls all higher intellectual functions, imagination, intuition, insight, consciousness, spiritual wisdom, knowledge, and true sight. Activation of the sixth chakra is thought to be responsible for all experiences of astral vision and astral traveling, as well as all encounters with the higher self. It is attributed to the “element” of light.

The Ajna center looks like a winged seed, and it contains no animal. That means there is no psychical factor, nothing against us whose power we might feel. The original symbol, the li ́ga, is here repeated in a new form, the white state. Instead of the dark germinating condition, it is now in the full blazing white light, fully conscious. In other words, the God that has been dormant in Muladhara is here fully awake, the only reality; and therefore this center has been called the condition in which one unites with Shiva. One could say it was the center of the unio mystica with the power of God, meaning that absolute reality where one is nothing but psychic reality, yet confronted with the psychic reality that one is not. And that is God. God is the eternal psychical object. God is simply a word for the non-ego. In Visuddha psychical reality was still opposed to physical reality. Therefore one still used the support of the white elephant to sustain the reality of the psyche. Psychical facts still took place within us, although they had a life of their own.

But in the Ajna center the psyche gets wings—here you know you are nothing but psyche. And yet there is another psyche, a counterpart to your psychical reality, the non-ego reality, the thing that is not even to be called self, and you know that you are going to disappear into it. The ego disappears completely; the psychical is no longer a content in us, but we become contents of it. You see that this condition in which the white elephant has disappeared into the self is almost unimaginable. He is no longer perceptible even in his strength because he is no longer against you. You are absolutely identical with him. You are not even dreaming of doing anything other than what the force is demanding, and the force is not demanding it since you are already doing it—since you are the force. And the force returns to the origin, God.

To speak about the lotus of the thousand petals above, the Sahasrara center, is quite superfluous because that is merely a philosophical concept with no substance to us whatever; it is beyond any possible experience. In vjñv there is still the experience of the self that is apparently different from the object, God. But in Sahasrara one understands that it is not different, and so the next conclusion would be that there is no object, no God, nothing but brahman. There is no experience because it is one, it is without a second. It is dormant, it is not, and therefore it is Nirvana.