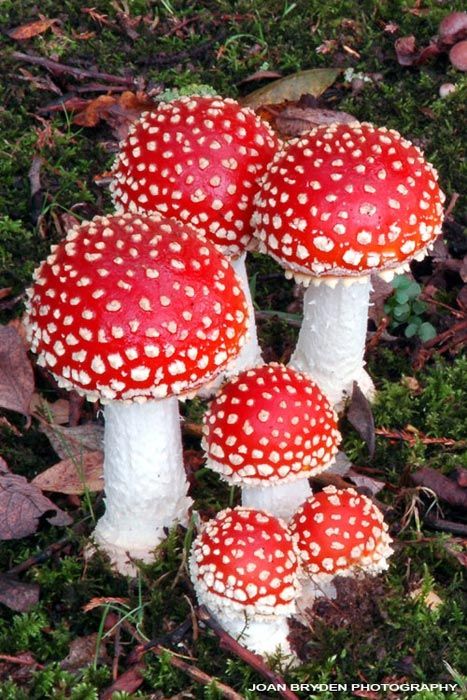 Amanita muscaria (also known as fly agaric or fly amanita) is a psychoactive mushroom that grows widely in the northern hemisphere. The fly agaric is a large white-gilled, white-spotted, usually red mushroom that is one of the most recognizable and widely encountered in popular culture.[5] It is noted for its hallucinogenic properties, which derive from its primary psychoactive constituents ibotenic acid and muscimol. Muscimol is a potent, selective agonist for the GABAA receptor that produces sedative, depressant and deliriant effects.[1]

Although classified as poisonous, reports of human deaths resulting from its ingestion are extremely rare. After parboiling—which weakens its toxicity and breaks down the mushroom’s psychoactive substances[2]—it is eaten in parts of Europe, Asia, and North America.[5]

Amanita muscaria has been used as an intoxicant and entheogen by the peoples of Siberia, and has a religious significance in these cultures. In western Siberia, the use of A. muscaria was restricted to shamans, who used it as an alternative method of achieving a trance state. In eastern Siberia, A. muscaria was used by both shamans and laypeople alike, and was used recreationally as well as religiously.[3]

There has been much speculation on possible traditional use of this mushroom as an intoxicant in other places such as the Middle East, Eurasia, North America, and Scandinavia. [5]

In remote areas of Lithuania, Amanita muscaria has been reported to be consumed at wedding feasts. The Lithuanians have also been reported to export the mushrooms to the Lapps in the Far North for use in shamanic rituals.[4]

Amanita muscaria has formed a symbiotic relationship with various coniferous and deciduous trees such as birches, pines, and spruces, and can often be found growing near them. There are many different varieties of amanita muscaria with varying appearances. [6]

Muscimol has an atypical mechanism of action. Unlike classical psychedelics (which are 5-HT2A agonists) and classical dissociatives (which are NMDA receptor antagonists), muscimol is a potent GABAA agonist, meaning it activates the receptor for GABA, the brain’s principle inhibitory neurotransmitter. As an agonist, muscimol binds to the same site on the GABAA receptor as GABA itself. This is unlike benzodiazepines and barbiturates, which bind to different allosteric sites on the GABAA receptor.[5]

Muscimol has also been shown to be a partial agonist at the GABAA-ρ receptor, which may contribute to its psychoactive effects. Some substances that interact with the GABAA receptor such as zolpidem have been shown to also have hallucinogenic effects.

Ibotenic acid has been shown to be a potent NMDA agonist as well as a powerful agonist at the group I and group II metabotropic glutamate receptors. Due to in vivo decarboxylation, ibotenic acid is metabolized to muscimol and thus has many similar pharmacological characteristics.[5]