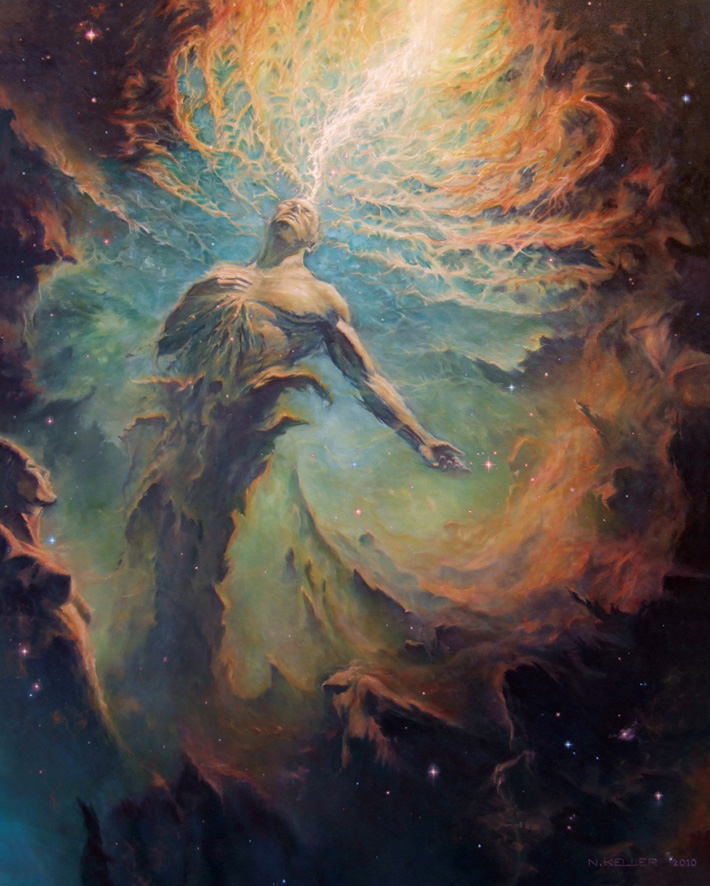 Astral Light is a term used by the French occultist Eliphas Levi to refer to the medium of all light, energy and movement, much in accordance with the theory of the luminiferous ether commonly held in the nineteenth century. In his view the astral light was a fluidic life force that fills all space and living beings.

H. P. Blavatsky adopted the term and used it in her writings. The Astral Light is not a universal principle, but belongs to our planet. Being a lower aspect of the universal Ākāśa, it embraces the second, third, and fourth of the Prakritic planes, although sometimes it is characterized as being only the second plane, corresponding with the Liṅga-śarīra in human beings.

The Astral Light receives the “impressions” produced on the Terrestrial plane and retains a record of all that happens. It also mirrors the higher planes. However, due to its nature, the reflections are fragmentary and misleading. The Astral Light responds to the will-power and can therefore be used to produce some occult and psychic phenomena.

The Astral Light records what takes place, not only on a global level, but also at the level of personal experience:

Nothing that takes place, no manifestation however rapid or weak, can ever be lost from the Skandhic record of a man’s life. Not the smallest sensation, the most trifling action, impulse, thought, impression, or deed, can fade or go out from, or in the Universe. We may think it unregistered by our memory unperceived by our consciousness, yet it will still be recorded on the tablets of the astral light.[0]

According to Madame Blavatsky, the faculty of memory is related to the ability of consciousness to read into the person’s record of the astral light.

Memory of past lives

Mme. Blavatsky claimed that the recognition of people and places not known before are not necessarily a proof of the “soul’s memory” but the ability to read these things on the astral light:

The well-known fact — one corroborated by the personal experience of nine persons out of ten — that we often recognize as familiar to us, scenes, and landscapes, and conversations, which we see or hear for the first time, and sometimes in countries never visited before, is a result of the same causes [as the near-death review]. Believers in reincarnation [of the same personality] adduce this as an additional proof of our antecedent existence in other bodies. This recognition of men, countries, and things that we have never seen, is attributed by them to flashes of soul-memory of anterior experiences. But the men of old, in common with mediæval philosophers, firmly held to a contrary opinion.

Much of the theory connected with the idea of the astral light has its origin in the writings of Éliphas Lévi, where it plays a key role. In his book Dogma and Ritual of High Magic the astral light is strikingly described as a blind, amoral, universal force that sweeps all before it in a perpetual and restless search for equilibrium. According to Lévi, men achieve true freedom and moral stature only when they are able to rise above and act upon this constant, purposeless flux through the exercise of intelligence, and especially will. [1]

Writing of the astral light, Éliphas Lévi says that
“there exists in nature a force infinitely exceeding that of steam, a force that would enable the man capable of seizing and directing it to change the face of the world. The ancients knew this force: it consists in a universal agent whose supreme law is equilibrium and whose direction is directly related to the great arcanum of transcendental magic. Through the use of this agent one can change the very order of the seasons, produce the phenomenon of day in the middle of the night, enter instantaneously into contacts with the farthest ends of the earth, see events on the other side of the world, as Apollonius of Tyana did, heal or attack at a distance, and confer on one’s speech universal success and influence. This agent, barely glimpsed by the groping disciples of Mesmer, is nothing other than the first matter of the great work of the medieval adepts”.[2][3]

Éliphas Lévi wrote that the astral light was created when God uttered the words:

“Let there be light”. It is a surrounding fluid that penetrates all things. It is “indifferent in itself” and can be used for good or evil. He further notes that the astral light performs another important function: it is a kind of universal record keeper that registers all of our desires, intentions and, acts. [4]

Éliphas Lévi believed in the connection between Heaven and Earth and never questioned the Hermetic principle “As above, so below”. But he used a new terminology for his theories and ensured the spread of the new term “astral light”. [5]

Even though H. P. Blavatsky adopted the term she explains that Éliphas Lévi sometimes identifies the Astral Light with what Theosophists call Akasha.[6]

The Astral Light is originally a pure reflection of the higher planes. However, since it also absorbs the emanations (thoughts and emotions) produced on our plane, in the course of human evolution it becomes “polluted”. This pollution is reflected on earth and becomes a source of moral and physical suffering to humanity:

As the Esoteric Philosophy teaches us, the Astral Light is simply the dregs of Akâsa or the Universal Ideation in its metaphysical sense. Though invisible, it is yet, so to speak, the phosphorescent radiation of the latter, and is the medium between it and man’s thought-faculties. It is these which pollute the Astral Light, and make it what it is—the storehouse of all human and especially psychic iniquities. In its primordial genesis, the astral light as a radiation is quite pure, though the lower it descends approaching our terrestrial sphere, the mo78]

Eliphas Levi calls it the great Serpent and the Dragon from which radiates on Humanity every evil influence. This is so; but why not add that the Astral Light gives out nothing but what it has received; that it is the great terrestrial crucible, in which the vile emanations of the earth (moral and physical) upon which the Astral Light is fed, are all converted into their subtlest essence, and radiated back intensified, thus becoming epidemics–moral, psychic and physical.[8]

Read and study what Éliphas Lévi says of the Astral Light, which he calls Satan and the Great Serpent. The Astral Light has been taken too literally to mean some sort of a second blue sky. This imaginary space, however, on which are impressed the countless images of all that ever was, is, and will be, is but a too sad reality. It becomes in, and for, man—if at all psychic—and who is not?—a tempting Demon, his “evil angel,” and the inspirer of all our worst deeds. It acts on the will of even the sleeping man, through visions impressed upon his slumbering brain (which visions must not be confused, with the “dreams”), and these germs bear their fruit when he awakes.

In Isis Unveiled Blavatsky writes that the Astral light is related to some occult and psychic phenomena:

“The same as the sidereal light of Paracelsus and other Hermetic philosophers. Physically, it is the ether of modern science. Metaphysically, and in its spiritual, or occult sense, ether is a great deal more than is often imagined. In occult physics, and alchemy, it is well demonstrated to enclose within its shoreless waves not only Mr. Tyndall’s “promise and potency of every quality of life,” but also the realization of the potency of every quality of spirit. Alchemists and Hermetists believe that their astral, or sidereal ether, besides the above properties of sulphur, and white and red magnesia, or magnes, is the anima mundi, the workshop of Nature and of all the cosmos, spiritually, as well as physically. The “grand magisterium” asserts itself in the phenomenon of mesmerism, in the “levitation” of human and inert objects; and may be called the ether from its spiritual aspect.”

Eliphas Lévi called it the “grand Agent Magique” (great Magic agent) although Mme. Blavatsky says this is so “only so far as Black Magic is concerned”.