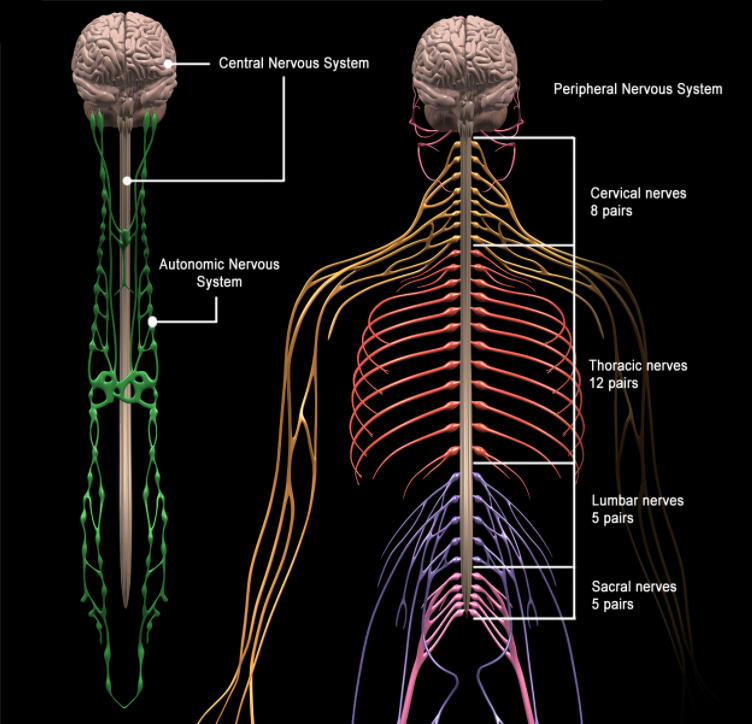 Since the strong theoretical influence of cybernetics in the fifties, the CNS is conceived as a system devoted to information processing, where an appropriate motor output is computed as a response to sensory input. Yet, many threads of research suggest that motor activity exists well before the maturation of the sensory systems and then, that the senses only influence behavior without dictating it. This has brought the conception of the CNS as an autonomous system.

The CNS consists of two major structures: the brain and the spinal cord. The brain is encased in the skull, and protected by the cranium.[2] The spinal cord is continuous with the brain and lies caudally to the brain.[9] It is protected by the vertebrae.[2] The spinal cord reaches from the base of the skull, continues through[3] or starting below the foramen magnum,[2] and terminates roughly level with the first or second lumbar vertebra,[4] occupying the upper sections of the vertebral canal.[3]

Microscopically, there are differences between the neurons and tissue of the CNS and the peripheral nervous system (PNS). [5] The CNS is composed of white and gray matter.[4] This can also be seen macroscopically on brain tissue. The white matter consists of axons and oligodendrocytes, while the gray matter consists of neurons and unmyelinated fibers. Both tissues include a number of glial cells (although the white matter contains more), which are often referred to as supporting cells of the CNS.

From and to the spinal cord are projections of the peripheral nervous system in the form of spinal nerves (sometimes segmental nerves[2]). The nerves connect the spinal cord to skin, joints, muscles, etc., and allow for the transmission of the efferent motor as well as afferent sensory signals and stimuli.[4] This allows for voluntary and involuntary motions of muscles, as well as the perception of senses. All in all 31 spinal nerves project from the brain stem,[4] some forming plexus as they branch out, such as the brachial plexus, sacral plexus, etc.[2] Each spinal nerve will carry both sensory and motor signals, but the nerves synapse at different regions of the spinal cord, either from the periphery to sensory relay neurons that relay the information to the CNS or from the CNS to motor neurons, which relay the information out. [4] 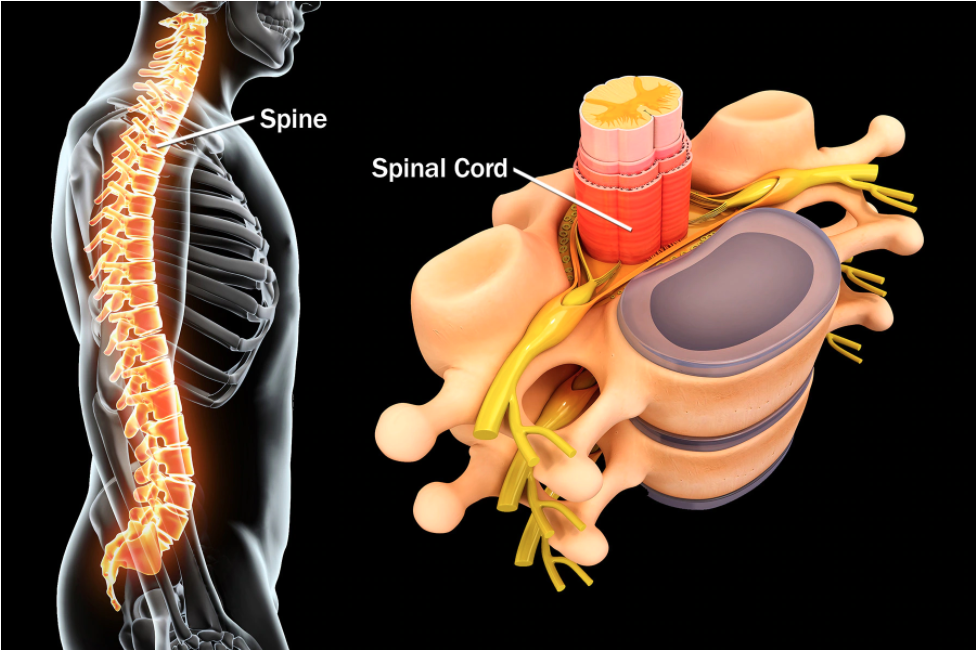 The spinal cord relays information up to the brain through spinal tracts through the final common pathway[9] to the thalamus and ultimately to the cortex.

Apart from the spinal cord, there are also peripheral nerves of the PNS that synapse through intermediaries or ganglia directly on the CNS. These 12 nerves exist in the head and neck region and are called cranial nerves. Cranial nerves bring information to the CNS to and from the face, as well as to certain muscles (such as the trapezius muscle, which is innervated by accessory nerves[8] as well as certain cervical spinal nerves).[3]

Two pairs of cranial nerves; the olfactory nerves and the optic nerves[7] are often considered structures of the CNS. This is because they do not synapse first on peripheral ganglia, but directly on CNS neurons. The olfactory epithelium is significant in that it consists of CNS tissue expressed in direct contact to the environment, allowing for the administration of certain pharmaceuticals and drugs. [8]

At the anterior end of the spinal cord lies the brain.[9] The brain makes up the largest portion of the CNS. It is often the main structure referred to when speaking of the nervous system in general. The brain is the major functional unit of the CNS. While the spinal cord has certain processing ability such as that of spinal locomotion and can process reflexes, the brain is the major processing unit of the nervous system.[10][11]

The brainstem consists of the medulla, the pons and the midbrain. The medulla can be referred to as an extension of the spinal cord, which both have similar organization and functional properties.[9] The tracts passing from the spinal cord to the brain pass through here.[9]

Regulatory functions of the medulla nuclei include control of blood pressure and breathing. Other nuclei are involved in balance, taste, hearing, and control of muscles of the face and neck.[9]

The next structure rostral to the medulla is the pons, which lies on the ventral anterior side of the brainstem. Nuclei in the pons include pontine nuclei which work with the cerebellum and transmit information between the cerebellum and the cerebral cortex.[9] In the dorsal posterior pons lie nuclei that are involved in the functions of breathing, sleep, and taste.[9] 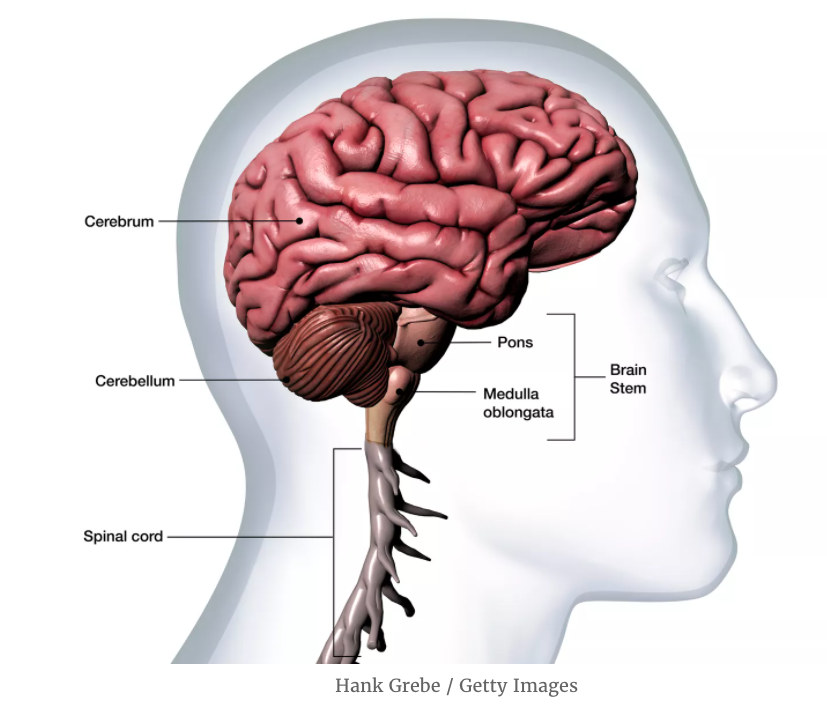 The midbrain, or mesencephalon, is situated above and rostral to the pons. It includes nuclei linking distinct parts of the motor system, including the cerebellum, the basal ganglia and both cerebral hemispheres, among others. Additionally, parts of the visual and auditory systems are located in the midbrain, including control of automatic eye movements.[9]

The brainstem also holds the reticular formation, a group of nuclei involved in both arousal and alertness.[9]

The cerebellum lies behind the pons. The cerebellum is composed of several dividing fissures and lobes. Its function includes the control of posture and the coordination of movements of parts of the body, including the eyes and head, as well as the limbs. Further, it is involved in motion that has been learned and perfected through practice, and it will adapt to new learned movements.[9] Despite its previous classification as a motor structure, the cerebellum also displays connections to areas of the cerebral cortex involved in language and cognition. These connections have been shown by the use of medical imaging techniques, such as functional MRI and Positron emission tomography.[9]

The body of the cerebellum holds more neurons than any other structure of the brain, including that of the larger cerebrum, but is also more extensively understood than other structures of the brain, as it includes fewer types of different neurons.[9] It handles and processes sensory stimuli, motor information, as well as balance information from the vestibular organ.[9]

The two structures of the diencephalon worth noting are the thalamus and the hypothalamus. The thalamus acts as a linkage between incoming pathways from the peripheral nervous system as well as the optical nerve (though it does not receive input from the olfactory nerve) to the cerebral hemispheres. Previously it was considered only a “relay station”, but it is engaged in the sorting of information that will reach cerebral hemispheres (neocortex).[9]

Apart from its function of sorting information from the periphery, the thalamus also connects the cerebellum and basal ganglia with the cerebrum. In common with the aforementioned reticular system the thalamus is involved in wakefulness and consciousness, such as though the SCN.[9]

The hypothalamus engages in functions of a number of primitive emotions or feelings such as hunger, thirst and maternal bonding. This is regulated partly through control of secretion of hormones from the pituitary gland. Additionally, the hypothalamus plays a role in motivation and many other behaviors of the individual.[9]

The hippocampus is involved in storage of memories, the amygdala plays a role in perception and communication of emotion, while the basal ganglia play a major role in the coordination of voluntary movement.[9]