The freedom of spirit, independence of mind, anarchy of science

In the Tree of Life the Devil goes from consciousness and harmony to intellect and logic – against all dogma, never caring for rules, freely uncompromising and independent. There are no restrictions, no limitations, nothing is forbidden. The Devil is aware of the darkness, he knows all the shadows and will go on researching even at a high price.

The Devil is another of the cards which are most often misunderstood. To understand this card you have to free yourself of all popular moral and superstitious ideas.

The Devil is represented by the god Pan, in the form of a white mountain-goat with powerful twisted horns. The column behind him symbolizes the erect penis, the two globes below symbolize the testicles. This is a representation of creative energy in its most material and male aspect.

In the globes, like sperm cells, are four female and four male bodies, which are bringers of the new. The tremendous powers of generation are also symbolized by the staff with a winged globe and two snakes, the snakes of Horus and Osiris.

The phallic column reaches the upper edge of the painting. It reaches through the heavens, symbolized by the ring of the body of the star-goddess Nuith. The column also reaches downward deep into the center of the earth.

This connecting of earth’s center and the cosmos is a wonderful image of creative union. This anchoring deep in the earth permits the dark brown earth energy to rise in order to melt with the golden yellow cosmic energy from above. This melting together of cosmic and earth energy inspires you in creative directions and makes you capable of manifesting this inspiration.

On Pan’s forehead we see his open third eye. This indicates his extensive abilities in the realm of extra-sensory perception. He is a seer who can see not only the obvious, but also the deeper essence of what he observes.

His expression is one of very humorous satisfaction. All people who see the essence of the world can be recognized by their marked sense of humor (e.g., Castaneda’s Don Juan). Only ignorant people are deadly serious, and are fully identified with their thoughts and actions. This imprisonment in the animal-material is the essence of our common conception of the devil. But Pan grins over people and their projections, with which they »demonize« him. In his wisdom he sees that, in fact, every desire, every imprisonment, all-possessiveness leads only to frustration and suffering. Human beings will only arrive at this insight through repeated direct experience. The more you learn to see or become aware, the more you can truly enjoy. When you are freed from all moralistic limitations you will surrender with utter sensuality to the enjoyment of the earth, discovering the ecstasy in every manifestation, tasting the divine in everything. You will enjoy and continue on, without clinging. 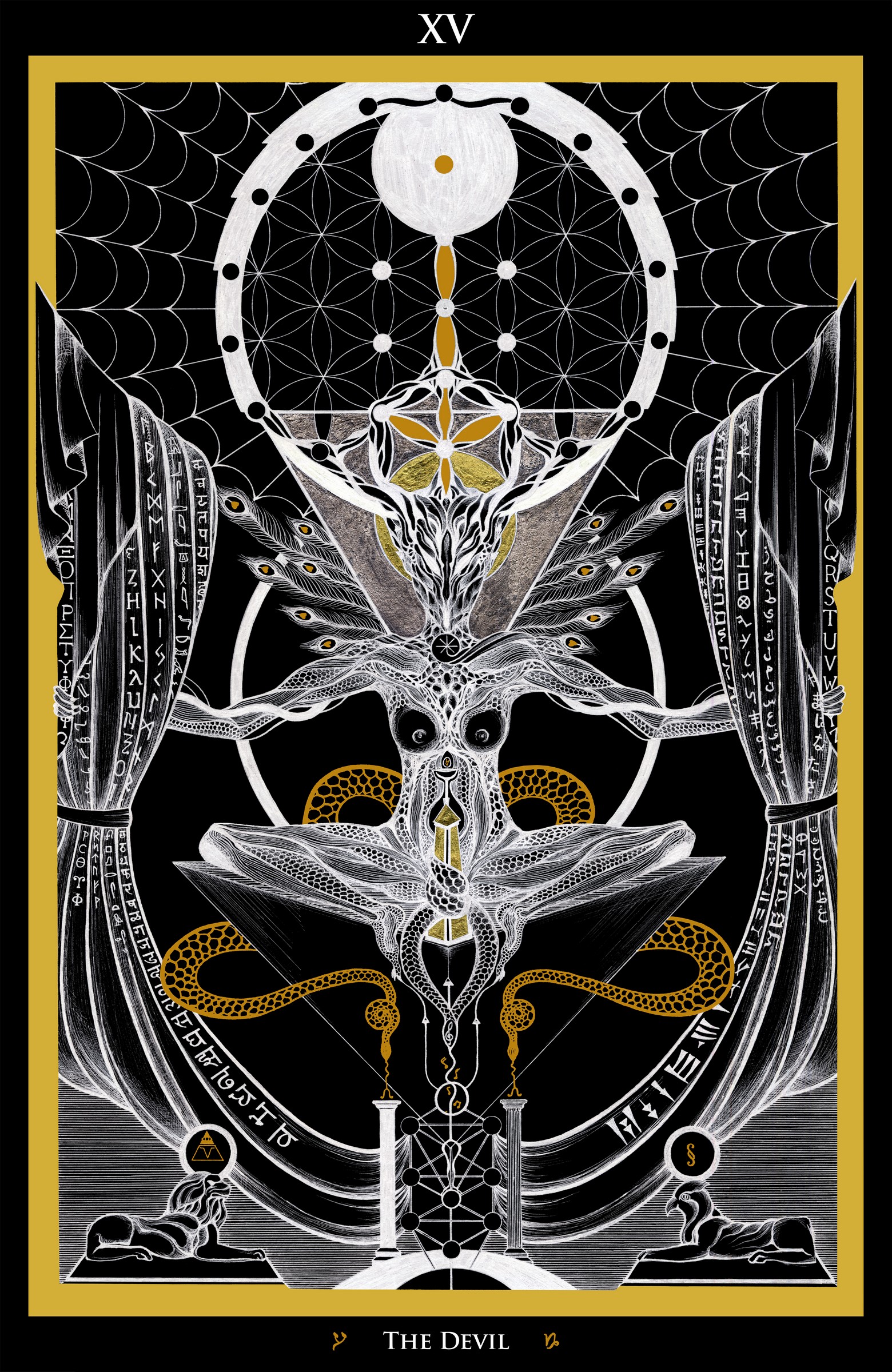 The Devil by Ina Audeirieth

The Devil represents a concept that is so subtle it is easily misunderstood. In fact, the early Christian theologians so misunderstood this concept that it is now considered synonymous with evil…..like the Evil Twin of a One or Monotheistic God… As a modern person who knows the first law of physics, we know there is only “one energy that cannot be created nor destroyed, only transformed [and transmitted]”. Therefore, evil is not a separate form of energy, it is a form of upside-down thinking, which is often depicted as an upside-down pentagram.

The Hebrew letter Ayin, meaning Eye, which is a metaphor for “I”: the “All-Seeing Eye”, which is the All-Seeing Identity shown on the alien’s forehead. Capricorn is the Zodiacal attribution, an earth sign. Saturn is the ruling planet which is magically illustrated in this new version illustrated by Trudy.

The Path of Ayin(meaning Eye, which is a symbol for The “I”), is the Twenty-sixth Path and is formative. In the terms of Self-structure; it is the bridge between The Solar or Soul Personality and individuality. The Solar Logos, is the Original Persona of the Divine Child of God, i.e. the Son/Sun.

This card represents a Raw animal Power (Mars), it is the Survival-Force reflection of “I Will Be”, that brings about the transmutation of  The Tower (key 16) and is in the sign of Capricorn (also shown as the Goat on the card), which is where Mars is exalted. Capricorn is a weighty, even blind sign of Earth and symbolizes the highest and lowest states of individual personality. Yet it is considered a sign of initiation, or release from matter formed limitations. These material limitations are suggested by the astrological rulership of Capricorn by Saturn, the Planet of Binah, The Great Mother (Imagination) that governs the limitations of form, as does Saturn/Time. These limitations are of both the enclosure of matter or of time, the artificial system by which we meter and enclose all activities, and our own self-definition. Thus, this card also represents the average person’s misconception of “reality”; a perceptive belief that the material-sensual condition is “Real”. The Qabalist knows the physical-material world as the “1%” world and realizes that the other invisible “99%” (often called “the other side of the Mirror”) is the Real. Considering the path of the serpent, where the magician strives to ascend through the tree of life, by intellectual perception and observation of delusional games of our dual nature, in order to achieve liberation and unification with the Solar Logos, the Self (Tiphareth).

In our collaboration with Trudy, we have made a major change to this traditional tarot card and that is to represent the Baphomet with an Alien head instead of the goat. This is to emphasize the significance of this card with regards to the path of the serpent. Once the dualistic nature of our animal body understood, the magician melts down all contradictions/limitations governing his/her physical existence in the light of the Solar Logos, the Tiphareth. Connecting Hod & Tiphareth, the path of Ayin is a mystical gateway to achieve unity through the deep understanding and decoding of the physical matrix (materialistic intelligence and wisdom) and experience of the divine energy in its most gross form.

Eliphas Levi called The Devil –The Path of Ayin – the “Great Magical Agent” this process of manipulation as, to dissolve, to consolidate, to quicken, to moderate, i.e., dissolution, re-integration, activity, and grounding. Thus we have the same qualities as described to Fire, Water, Air, and Earth. This card is about becoming enlightened about what is real and what is reality, and therefore, helps us not to take our perceptions of the material world seriously, which only means “fearfully”.  It pays to remember that the Survival Mind of the animal, is our devilish tempter that tricks us into believing we are as Moons who are at the mercy of  Solar-Forces rather than the Magus (The Sun) who manipulates them.