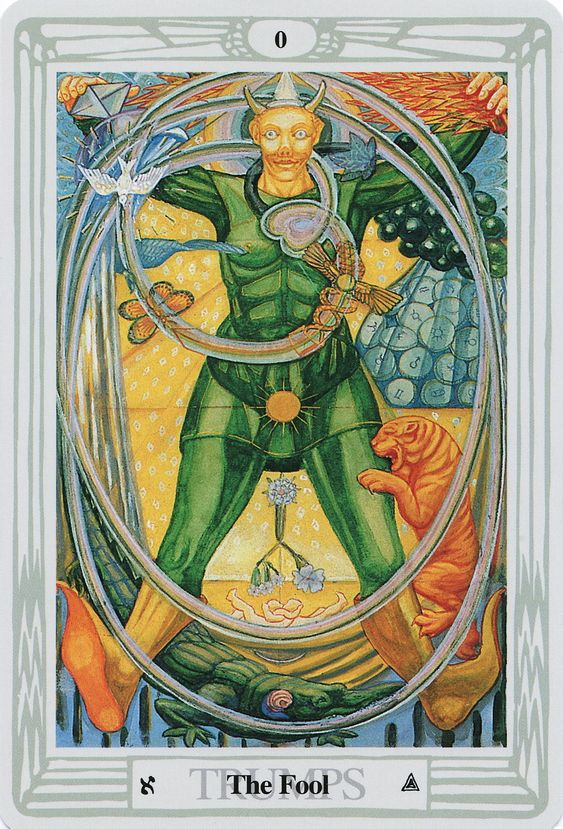 Changes, movement, the innocence of a child

Pisces going to Aries, on the other hand Uranus/Mercury standing for curiosity, spontanity, madness

Tree of life: Kether going to Chokmah ( Aleph א )
Element: Air
Number: 0 as nothing and begin of it all

The Fool is the symbol of true innocence, a perfect state of joy and freedom, the sure feeling to be one with the spirit of life, at any time. The Fool is represented by the god of Spring, Dionysus. The green color reminds us of the powerful creative force of Spring. The crocodile (the ancient Egyptian god of creativity) is also the bearer of the greatest creative powers.

The long umbilical cord, connection to cosmic oneness, wraps the Fool in four spirals. The possibility of rebirth is given on all four planes of human existence: spiritual, intellectual, emotional and physical. The prerequisite is your readiness to change in all areas; your responsibility to self-development.

The four spirals are described as follows:

The first spiral surrounds the heart in heart-shape. It stands for emotional rebirth; the recognition, perception and acceptance of true emotional needs.

The second spiral bears three symbols. The dove represents vulnerability and sensitivity as requirements for love of oneself and others. The ability to set limits and say »No« in unclear relationships is also needed. The butterfly means transformation (the caterpillar becomes the butter- fly). The snakes wrapped arround each other (Caduceus) are a symbol for engagement in in healing and health.

On the third spiral lay two naked children entwined. Their presence brings the realm of relationship into the picture. The quality of your relationships with family, friends, business associates and deep emotional bonds must be re-examined and re-evaluated. Which people do you really want around you?

The fourth spiral is occupied by the tiger and the crocodile. The crocodile urges for the development of creative abilities in work and career. The rose it wears symbolizes the unfolding of creative powers. The crocodile’s powerful jaws testify to its endurance and leadership qualities, as well as to the ability to work independently and self- sufficiently. It is possible to break through old, worn-out conditioning.

The tiger symbolizes fear (see Princess of Wands). Dionysus is repeatedly bitten by this tiger, but his gaze remains directed forward. He gives no attention to fear, so it has lost its power over him. The tiger cannot injure him at all. His unshakable faith in existence allows him to be aware of fearful feelings without being their victim. He is liberated, able to be receptive for mystical peak experiences and interpersonal interaction. Basic, dynamic powers are released which drive forward. The onrushing creative unfolding process cannot be held back.

The Fool holds a cup with a base of crystal in his right hand and a burning torch in his left. These are alchemical symbols (see the card XIV Art). They show the meeting of opposite forces which creates the energy for the transformation, the quantum leap, to take place.

The grapes, symbols of fertility, are ripe for harvest. The white spots on the golden background mean Fall (harvest time); falling leaves, dropping, letting go, surrender. The coins at the right, engraved with astrological symbols, reflect the overflowing wealth on all planes which comes when you give your creative energies full rein to unfold.

The horns Dionysus wears reflect expanded perception. The rainbow surrounding his head means wholeness, Unity, the bridge between heaven and earth, inner and outer. Between his legs is a cluster of flowers which represents the process of tranformation. At the bottom, the active aspect (the three flowers to the left symbolize body, mind and spirit) combines with the passive aspect, receptivity, willingness to learn. The simple blossoms below, when united, give birth to the many-petalled blossom above.

The sun symbolizes the creative and transformatory powers released by the melting of basic sexual energy. 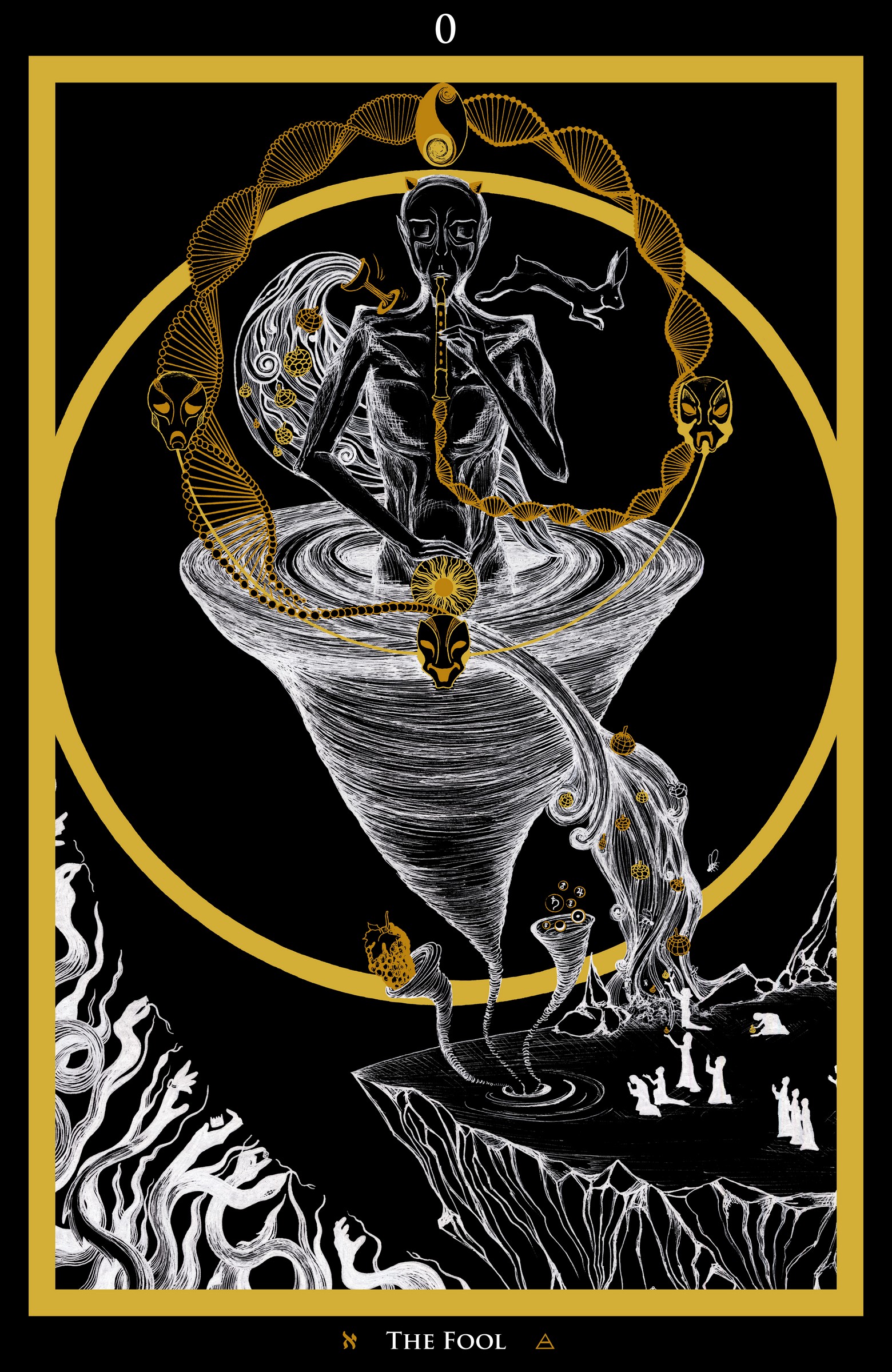 0_ The Fool by Ina Audeirieth