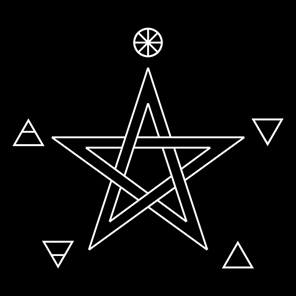 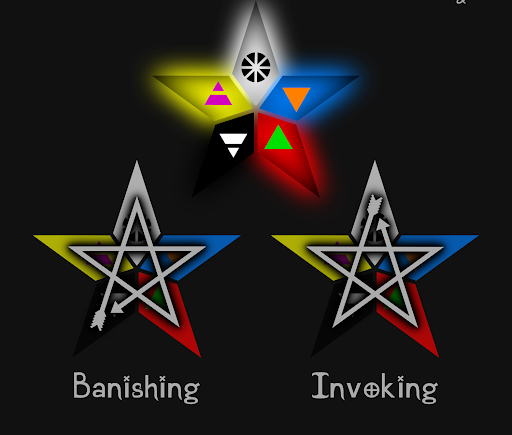 In the LRP (invoking/banishing) Pentagrams of Earth are used because this element traditionally can be understood as containing, or being a consolidation of the other three. In the Sepher Yetzirah, for example, Earth is the result of the equal combination of the three ‘Mother’ elements of Air, Fire and Water. Therefore, the Earth Pentagram should be understood within the context of the LRP as a stand in for all of the other Pentagrams. The difference between the invoking and banishing forms of the LRP is relatively subtle, and consists largely in a distinction of emphasis. The Lesser Invoking Ritual of the Pentagram invokes a current of balanced spiritual force into the ritual space. The Lesser Banishing Ritual of the Pentagram performs the same function, but makes more explicit the specific directing of that energy to dissolve and banish any unbalanced forces. As the LRP is often used to open a ritual space with a preliminary clearing of negative energy, the banishing form will probably be the one most used in this context. However, the invoking form can still be used for the same purpose and, especially if used less frequently, can often have an extra ‘kick’. It is also particularly effective when performed by itself as a stand-alone ritual. [1]