The Lust by Crowley & Harris

The Passion is the step into the second decade of the Major Arcana, the point where the journey into the inner depth begins. The traditional name of this card is Strength. Crowley named the card ‘Lust’ – and most people don’t really think of mastering their inner animal, but enjoy it full tilt…

Lust means more than vital strength, it includes also the joy in, and the enjoyment of, that strength; it means also passion. A woman sits on the back of a lion. In her right hand she holds the Holy Grail which is enflamed with the fire of love and death, and raises it into the heights.

The card is a representation of divine intoxication, divine ecstasy, divine madness. The woman appears intoxicated. The lion is also enflamed by lust. His seven heads are those of an angel, a saint, a poet, an adulteress, a daring man, a satyr, and a lion-serpent. They symbolize different aspects and viewpoints which now unite and meld together as a single perceptive force in one orgiastic experiencing. They are independant of morality and limiting rationalism. The energy forms expressed here are those of an archetypal creative Order.

The animal within is not tamed and integrated through struggle and repression, but through affirmation and surrender. The strength you gain in this process helps you overcome old fears and restrictive conditioning, represented by the folded hands and the faces of the saints seen dimly in the background.

The ten faintly radiating circles, scattered behind the woman and lion, show the fading old moral ideals which will now be replaced by the fresh ones pulsating at the top of the picture, symbolizing the new light which streams snake-like in all directions to destroy the world and create it anew. This process of recreation is again symbolized in the lion’s tail, a serpent with a lion’s head.

The woman’s head is turned completely toward the urn of fire. She is totally absorbed in the energy of transformation inherent in any total and conscious surrender. This is the secret of Tantra, the awareness which perceives the fullness of each moment and accepts all of life, rejecting nothing.

Lust reveals its valuable creative potential only when fully tasted, savored and drunk in. Only then can it be understood and be implemented in your own process of becoming aware. The way to the light passes through all aspects of darkness. 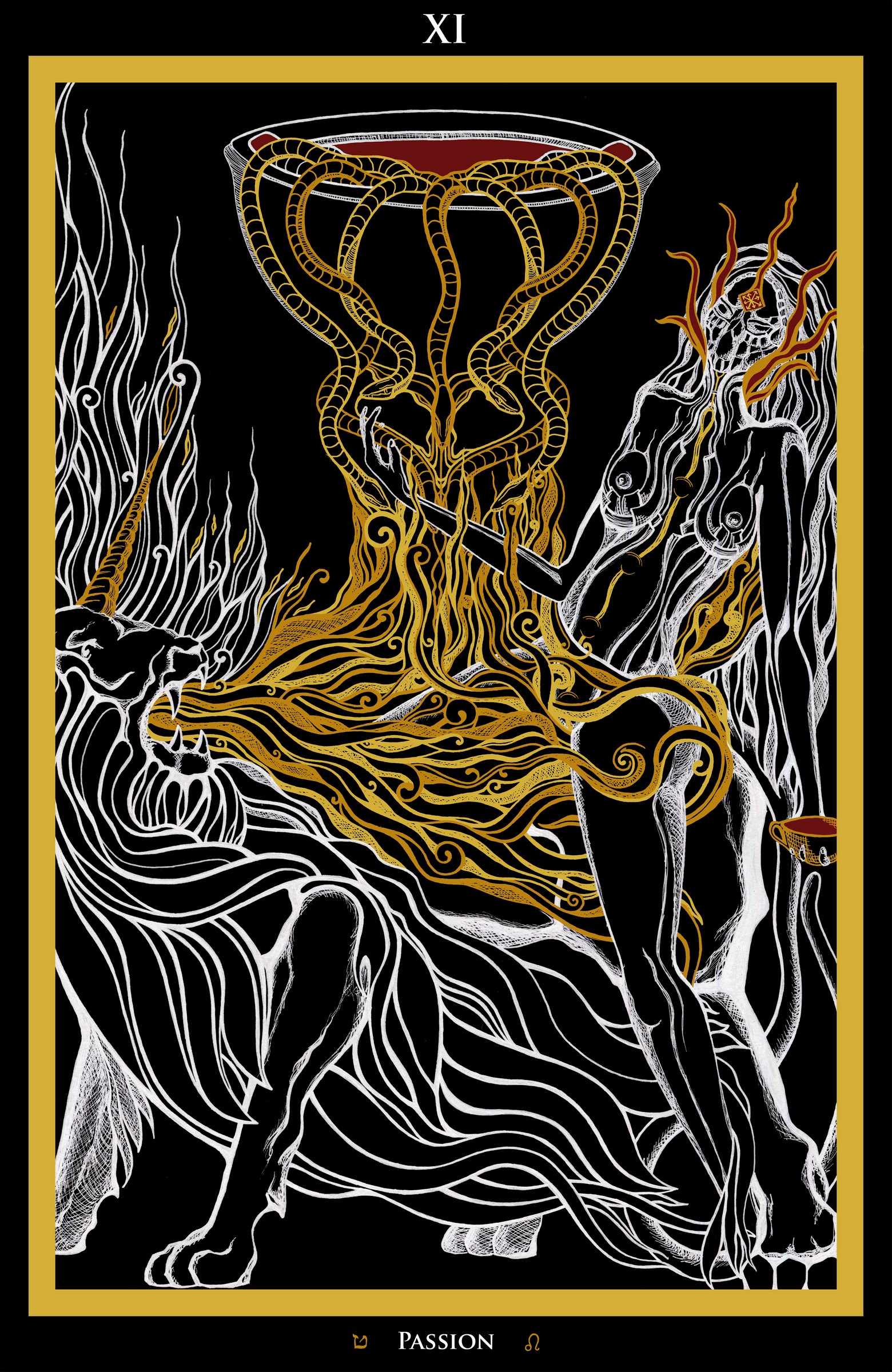 The Passion by Ina Audeirieth