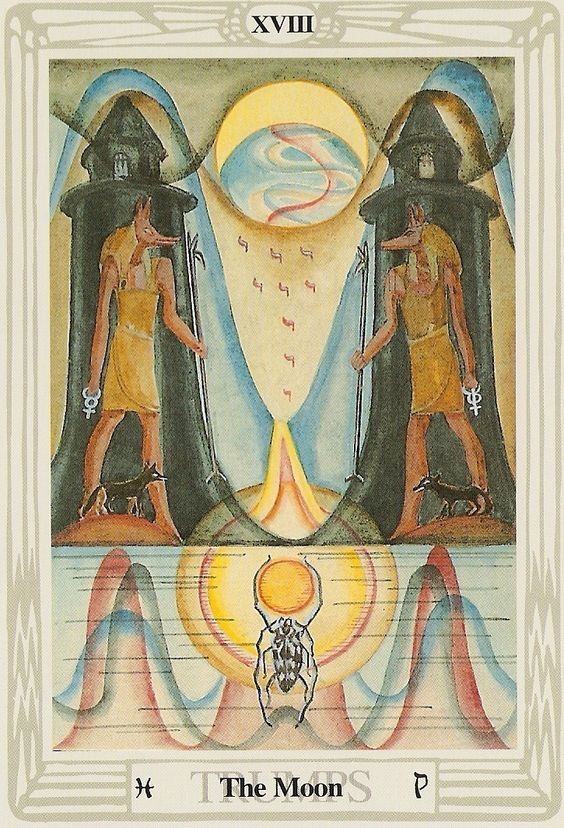 The Moon – By Crowley & Harris

Entering the underworld, exploring the depths of soul, confrontation with the dark side

Element: Water
Number: 18 as the return of the animal (turnus of sun- and moon eclipse) cross sum is the 9

The moon here is the waning moon. It is in the process of diving further and deeper into the darker realms of the soul. It is the time of final, and often most difficult, testing. The danger of forgetting your true goal in the darkness is very great. Temptations and illusory perceptions lurk along the way ready to lead you down the garden path! Be careful!

The upper part of the card shows a narrow passageway guarded by sinister sentries whose heads are those of wolves (Anubis, Egyptian god of Death). Behind them rise dark, threatening towers, symbols of the sentries’ power. The guards hold the scepter of the Phoenix in one hand and the symbols for Mercury and Pluto as keys in the other. Jackals lurk at their feet ready to fall upon and devour the corpses of those who risk passing between the towers in uncertainty or out of mere curiosity.

The guarded entranceway is also a representation of the female sexual and birth organ, the vagina. The moon symbolizes here the unconscious aspect of the feminine; changeable, moist, shadowy, seductive, possess- ing an eery attraction. Everything appears mysterious, doubtful and bewitching. But only by passing through this gateway will new life arise. The path to awareness leads us through unawareness, the unknown the menacing. Anyone who wishes to be a person of wisdom must first deal directly and fully with these areas of ignorance. Only through direct experience will you get to know them; the veils of illusion yield finally to the light as you recognize them for what they are. As the veils part, you gain valuable insight into the true mysteries hidden behind them. An analogy to this process is the rite of initiation performed in many tribes. The introduction into the status of adulthood requires the completion of a very difficult and dangerous task for which long and careful preparation is needed.

The person who dares to pass through the portals needs unconquer- able courage and the willingness to make the necessary preparations. Happy the one who has the good fortune to find a guide who can be trusted on this stage of the path! Yet even or perhaps especially in this case, tremendous awareness is required. All too many guides offer themselves with tempting promises without knowing the way themselves. Only by keeping in constant touch with the voice of your heart will you be able to turn mistakes into opportunities for progress in the path. When you truly follow the teachings of the heart, you will see that even a false path may have been a necessary learning step on the way.

The threshold to Death is also the threshold to a new life. This is the entry way into a higher consciousness. This is symbolized on the card by the sacred Egyptian beetle holding in its pincers the symbol for the sun. The beetle carries the renewing light into the darkness. Wherever this light of consciousness appears, the darkness disappears. In fact, the darkness is revealed as having been an illusion, mere shadows which appeared to exist only because something was blocking the flow of light. Getting to know what things are blocking the light for you and sweeping them aside are the first steps in transformation. 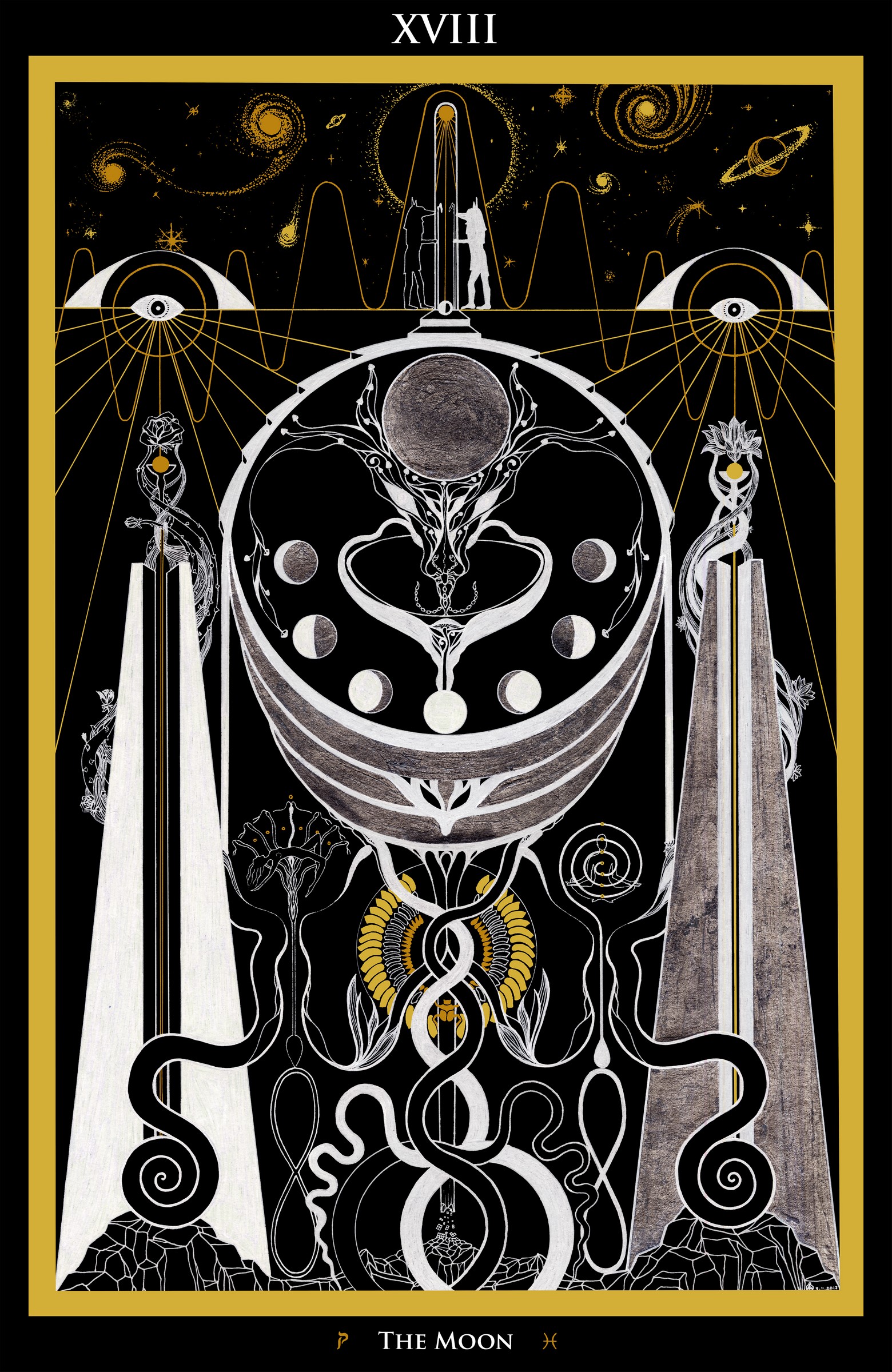 The Moon by Ina Audeirieth