“Those who regard this ritual as a mere device to invoke or banish spirits, are unworthy to possess it. Properly understood, it is the Medicine of Metals and the Stone of the Wise” — Aleister Crowley

The essential function of the rituals of the Pentagram is to assert the dominion of the magician over the chaos of the elemental realm or phenomenal world. This is done through symbolically signifying and magically identifying the magician’s alignment and participation in the spiritual ground of the cosmos. When first learned, these rituals are usually engaged with in a strictly performative manner. Words and gestures are memorized and used without deeper reflection. Familiarity with the ritual can often breed forgetfulness that it is not merely a performance piece, however, but rather a profound prayer and moving meditation. Actual, not merely symbolized identification with the absolute is the true goal of the ritual. This requires mindfulness and concentration in the performance of the visualizations, gestures and vocalizations. Personal issues and problems should be set aside before the manifestation of the sacred space of the ritual.

The Lesser Banishing Ritual of the Pentagram was a creation of the Hermetic Order of the Golden Dawn. However, various portions of the ritual are found to have far more ancient sources. In the New Testament, the Lord’s Prayer (Matthew 6:9-13) is obviously based upon Qabalistic principles, showing that Jesus of Nazareth, who was called Rabbi by his followers, knew his Qabalah. This is because the Lord’s Prayer is itself based on the Hebrew “Prayer of David” from the Old Testament, found in the first book of Chronicles 29:l. “The Prayer of David at the Foundation of the Temple” reads as follows:

Unto Thee, 0 Tetragrammaton,
are the Greatness and the Power and the Beauty and the Victoy and the Gloy,

For thine is the Kingdom and the Power and the Glory, forever and ever, Amen.4

This is only slightly different from the Qabalistic Cross, which states (in English):

Thou art the Kingdom and the Power and the Gloy , the Worldforever, unto the ages. Amen.

The word Atah (“Thou art”) is linked to the Sephirah of Kether, whose divine name is “I am.” Malkuth (“the Kingdom”) is the tenth sphere on the Tree. V’geburah (“and the Power”) refers to the fifth Sephirah of power. V’gedulah, w h c h means “and the Glory,” refers to Chesed since “Glory” (or “Magnificence”) is another title of Chesed. Le-Olahm, Amen means “forever unto the ages.”

With the Judeo-Chstiantradition, the image of God is seen as separate and outside of humanity. The image of God, as projected on the Tree of Life, is usually viewed as something “out there,” or something that is too sacred to be approached by sinful earthbound human beings. Thus the Tree of Life as the image of God is sometimes pictured as the backside of God by the orthodox religions. In other words, God’s face is not turned toward humanity, or as the scriptures tell us, “one cannot look upon the face of God and live.” It was safer to “image” the deity from behmd. Therefore to the Roman Catholic, Geburah is on the left shoulder-the same as the image of the Tree seen from the back, and outside of the human being. 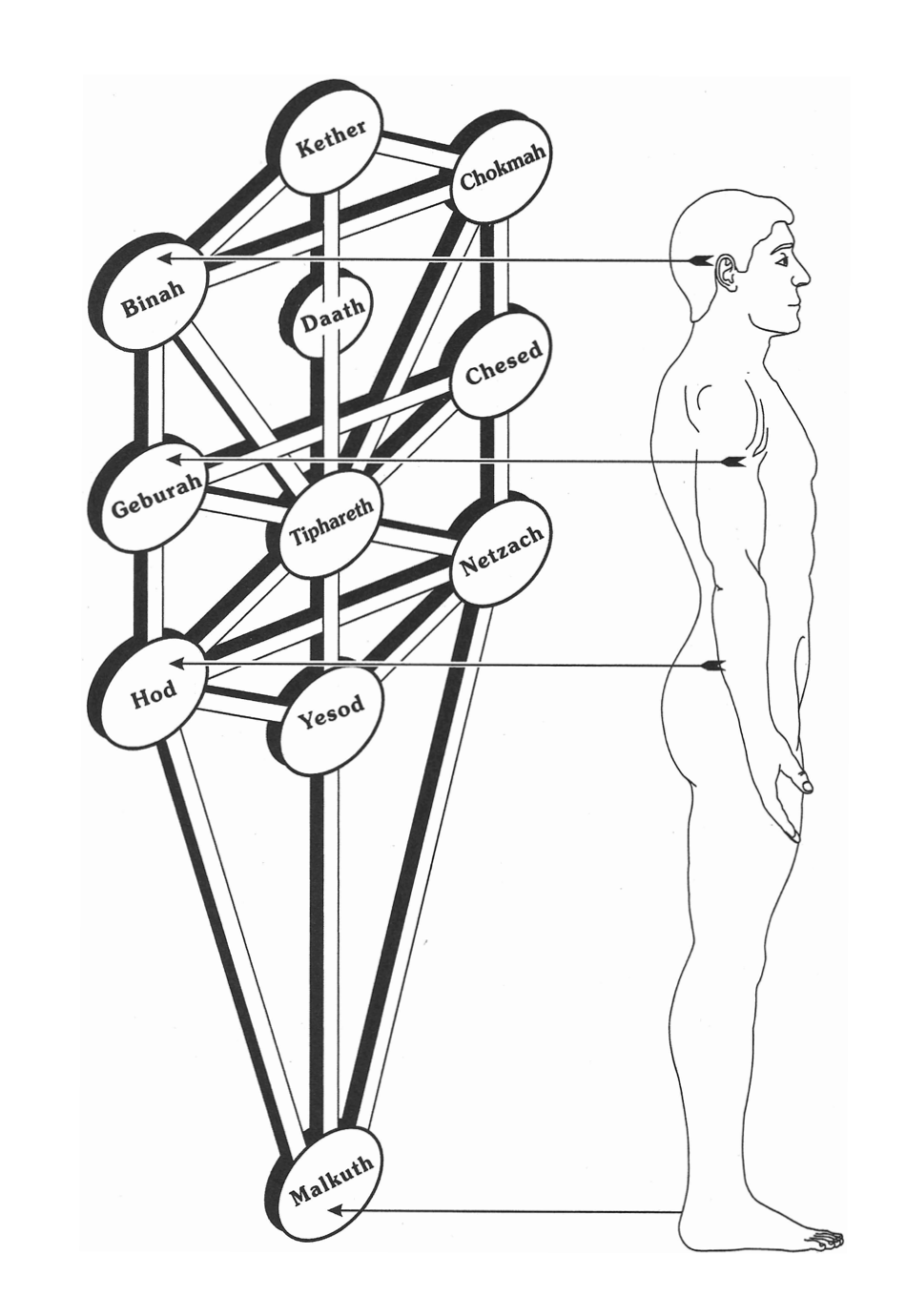 Figure 2. Backing into the Tree of Life

For the sake of clearance around the concept of white or black magic, before we get into practicing ceremonial magic, we need to ask ourselves to what purpose the establishment of elemental dominion is directed. If this is not to be a ritual of black magic, of mere dominion, this control must be directed by and towards the True Will of the magician. We will discover as we analyze this ritual that its symbolism makes this explicit. Much attention has been paid to the explanation of these rituals to the Pentagram itself as a symbol. Just as important, however, are the other features of the ritual — the manner in which the movements and visualizations define the space of the performance and into which the Pentagram is inserted and integrated as a component of a larger ritual gesture. We can break the general structure of the most basic Pentagram ritual — the Lesser Invoking or Banishing Ritual of the Pentagram (hereafter referred to as the LRP) — into a few basic components, which we will discuss in turn. [3]

Commenting on the Qabalistic Cross in his book Transcendental Magic, Eliphas Levi, the man most responsible for the occult revival of the nineteenth century,, wrote that: “This Sign, made after this manner, should precede and terminate the Conjuration of the Four.”8

The Conjuration of the Four refers to the four elements of fire, water, air, and earth. The four archangels in the LBRP are among the best known and most powerful of the Hebrew deities, and they are the governors of the four elements. The invocation of the archangels in the LBRP is very similar to an invocation in a Hebrew Night Prayer printed in an orthodox Siddur or Daily Prayer Book translated by Philip Birnbaum.9 The Siddur reads as follows:

In the name of the Lord God of Israel, may Michael be at my right hand, and Gabriel at my Eefl; before me Uriel; behind me Raphael; and above my head the Divine Presence.

This clearly relates very closely to the calling of the archangels in the LBRP. Although they are in a different order, they are still the same archangels, carrying out the same duties. This orthodox correspondence may reflect an approach that is different from that taken by the Golden Dawn. There are undoubtedly similar versions of the invocation of the archangels still tucked away in Hebrew texts.

Have a symbol for each of the elements on the altar, or have none of them. You should not have an imbalance in the energies the tools represent. If you do have the weapons, the Air symbol should be on the Eastern part of the altar, the Fire symbol to the South, the Water symbol to the West, and the Earth symbol to the North. If you have the tools, they should be wrapped in a piece of silk or cotton when they are not being used: the wand in red, the chalice in blue, the dagger in yellow and the pentacle in black. Sleight-of-hand magicians’ supply shops usually have silk handkerchiefs available in these and other colors and shades.