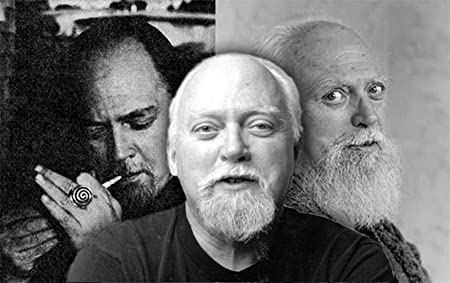 Robert Anton Wilson was an author, philosopher, teacher, and lecturer. He attended Brooklyn Polytechnical College (1952-57) and NYU (1957-58), where he studied electrical engineering before earning his Ph.D. in psychology from Paidea University, California in 1979.

Wilson served as an editor for Playboy magazine, as a co-founder of the Institute for the Study of the Human Future, and as Director of the Prometheus Society. Long revered as an eminent metaprogrammer and Trickster figure, he is perhaps best known for his writings, including the Illuminatus! trilogy (co-authored with Robert Shea) and for his work as a visionary, occultist, libertarian, and Futurist. Until the late 1990s, he frequently lectured on TV, radio and in person in the United States and Canada. Arlen, his beloved wife and co-conspirator, passed away in 1999.

With his mobility increasingly limited by post-polio symptoms, Wilson began corresponding more with students, colleagues and fans via email and blog. He also became an impassioned advocate of medical marijuana. At the end of his life, though quite frail and tiring easily, his wit and insight continued to inspire family and friends near and far.

His final blog post, written five days before his death, displays his characteristic humor and outlook:

“Various medical authorities swarm in and out of here predicting I have between two days and two months to live. I think they are guessing. I remain cheerful and unimpressed. I look forward without dogmatic optimism but without dread. I love you all and I deeply implore you to keep the lasagna flying. Please pardon my levity, I don’t see how to take death seriously. It seems absurd.” — Robert Anton Wilson, Jan 6 2007