Sacred geometry may be understood as a worldview of pattern recognition, a complex system of hallowed attribution and signification that may subsume religious and cultural values to the fundamental structures and relationships of such complexes as space, time and form. According to this discipline, the basic patterns of existence are perceived as sacred: for by contemplating and communing with them one is thereby contemplating the Mysterium Magnum, the patterning relationships of the Great Design. By studying the nature of these patterns, forms and relationships and their manifold intra- and interconnectivity one may gain insight into the scientific, philosophical, psychological, aesthetic and mystical continuum. That is, the laws and lore of the Universe. The term sacred geometry is also used for geometry which is employed in the design of sacred architecture and sacred art. The underlying belief is that geometry and mathematical ratios, harmonics and proportionality discoverable from geometry also gird music, light, cosmology, and other observable and sensate features of the Universe. This value system has been held throughout the World from time immemorial to prehistory, a cultural universal endemic to the Human Condition. Sacred geometry is the foundation of the design, architecture, fabrication and construction of sacred structures such as temples, mosques, megaliths, monuments and churches; sacred space such as altars, temenos and tabernacles; places of congregation such as sacred groves, village greens and holy wells and the creation of religious art, iconography and divine proportionality. Sacred geometry, art, iconography and architecture need not be monolithic and enduring, but may be temporary and yielding, such as visualization and non-permanent sand-painting and medicine wheels. Sacred Geometry is currently re-discovered as a knowledge KEY for shifting to a new paradigm of universal wholeness and loving inter-connectedness with the Web of Life. Traditional wisdom holds the universe to exist because of a profound harmonic order. From the quantum vacuum to atoms to DNA to galaxies, certain precisely reoccuring ratios and geometric symmetries are the foundation of the whole cosmos. [1]

The “Flower of Life” can be found in all major religions of the world. It contains the patterns of creation as they emerged from the “Great Void”. Everything is made from the Creator’s thought.  After the creation of the Seed of Life the same vortex’s motion was continued, creating the next structure known as the Egg of Life.  This structure forms the basis for music, as the distances between the spheres is identical to the distances between the tones and the half tones in music. It is also identical to the cellular structure of the third embryonic division (The first cell divides into two cells, then to four cells then to eight). Thus, this same structure as it is further developed, creates the human body and all of the energy systems including the ones used to create the Merkaba. If we continue creating more and more spheres we will end up with the structure called the Flower of Life. The most common form of the “Flower of Life” is hexagonal pattern (where the center of each circle is on the circumference of six surrounding circles of the same diameter), made up of 19 complete circles and 36 partial circular arcs, enclosed by a large circle.

Creation Of The Flower Of Life

In the earliest traditions, the supreme being was represented by a sphere, the symbol of a being with no beginning and no end, continually existing, perfectly formed and profoundly symmetrical. The addition of a second sphere represented the expansion of unity into the duality of male and female, god and goddess. By overlapping, the two spheres, the god and goddess created a divine offspring.  The Vesica Pisces motif (and its derivatives, the Flower of Life, Tree of Life, and fundamentals of geometry) has a history of thousands of years and easily predates virtually all major religions of the current era.

Figure 1. VESICA PISCES Drunvalo Melchizedek, in his Flower of Life symbolism, uses the Vesica Pisces as the geometric image through which light was created.The goddess of any and all religions which recognize her power and significance invariably use the Vesica Pisces to identify her.  From the overlapping pools of water and the chalice well cover in the goddess’s garden in Glastonbury (aka Avalon) to any number of representations of the Tree of Life, the goddess and her ability to create and birth life are celebrated.

The Seed of Life represents the seven stages, steps, or days of creation. The creation of a vibrating pattern of space (electromagnetic radiation) is the actual process of creation itself which otherwise is symbolized by various concepts such as “days of creation” to make something otherwise almost impossible to explain, much easier to handle. 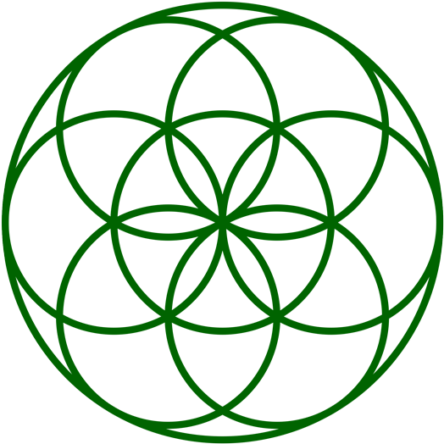 Figure 2. SEED OF LIFE
The Seed of Life Is the Symbol of Creation and theBlue Print of the Universe

The creation of the Octahedron is the first step or “day of creation.” The next stage involves the revolution of the Octahedron on its axes, forming a sphere. At this point, all of reality, including the Cosmic Designer’s awareness, exists as the Sphere itself. All that really exists is the sheath of the sphere itself. The next stage is “the spirit of the Creator floating upon the face of the waters” which was mentioned in the Old Testament. In other words, the Cosmic Designer’s next spontaneous realization or expansion in self-awareness was to venture outside the edge of the sphere and project another sphere using the previous step of materializing an octahedron and spinning it into a sphere. In the second sphere that was created by the Cosmic Designer, a

photon or particle of light was sent out. In transmitting a second spinning octahedron into a sphere on the membrane of the first sphere, the image appears of two circles crossing each other in their centers, a design recognized as the Vesica Pisces. This configuration is a geometrical formula which symbolizes the electromagnetic spectrum. In Drunvalo Melchizedek’s book The Ancient Secret of The Flower of Life, Vol. 2 can be found much more information regarding this whole process. “Let there be light” and light was the primary (first cause) phenomenon that God intended. In the ongoing process to replicate the spheres and form more Vesica Pisces, multiple forms of creation can be seen emanating from the endless cascade (reproduction) of further geometrical patterns.

The continuation of the “seven-day” creation process looks like the successive division of cells illustrated here in a fertilized egg until there are seven cells or circles overlapping one another creating the perfect flower-shaped “Seed of Life” pattern.

On the seventh day, the process ends. On the “SHABBAT,” or day of rest, the Seed of Life is completed. The whole form of the primary vortex which contains the blue print of the cosmos is finally completed.

Symbolism around the World

Symbols that resemble the Flower of Life can be found in temples, churches, secular buildings, burial sites, art objects and manuscripts worldwide. Many cultures used this symbol in full knowledge of its power and potency. In Egypt, for example, the Flower of Life is engraved in some parts of the Pyramids. The relevance of this symbol for the ancient Egyptians can also be found in their temples. Some of the temple complexes were constructed with utter preciseness and harmony. Theoretically, this type of preciseness couldn’thave been possible at that time. I will name some other places where Flower of Life imagery has been found: In a temple in Abydos (Egypt); in the Rama temple of Vijayanagara (India); in the Forbidden City (China); in Altenkirchen, the Apis-Altar in Dresden which belonged to Augustus II the Strong (Germany); in Gotland (Denmark); on the ceiling of a church in Maria Luschari (Italy); in the ruins of Pompeji (Italy); in an orthodox monastery in Kreta (Greece); in a church in Sörg (Austria); on a platte of the silver treasure of Augustus.

There are many spiritual beliefs associated with the Flower of Life; for example, depictions of the five Platonic Solids are found within the symbol of Metatron’s Cube, which may be derived from the Flower of Life pattern. These platonic solids are geometrical forms which are said to act as a template from which all life springs. 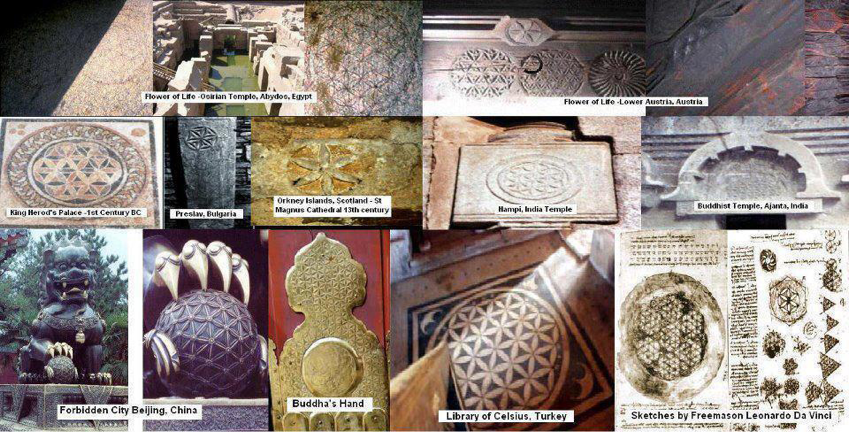 Figure 4. Pattern of Flower Of Life in ancient places around the worlds

The Flower of Life secret symbology

Sacred Geometry reveals the harmonic energy patterns by which nature creates and designs. Sacred Geometry is a vital element in all spiritual traditions. Every tradition used a unique symbolic language to preserve their knowledge about the Geometry of the Universe and its design.

Within the Flower of Life, one can discover a secret design by selecting thirteen (13) spheres from the Flower of Life. By drawing out these thirteen (13) circles, one finds the origin of everything, this sacred geometric symbol is known as the Fruit of Life. These thirteen (13) circles provide thirteen (13) systems of knowledge with each one illuminating a different facet of existence. All information regarding the human being to the island universes throughout the cosmos is available through these systems. In the first system, for example, it’s possible to create any molecular structure and any living cellular structure that exists in the universe. Any thriving cellular organism or molecular configuration in existence, for instance, could be constructed using information from the first system. In other words, all thriving beings.

Metatron’s cube depicts the five platonic solids which may be derived from the flower of life. The five platonic solids are geometrical forms which are said to act as a template from which all life springs, according to spiritual belief. The Platonic solids are five structures that are crucial because they are the building blocks of organic life. These five structures are found in minerals, animated and organic life forms, sound, music, language, etc. Metatron’s cube is also considered a holy glyph, used to ward off evil spirits. The Kabbalah’s Tree of life is also thought to be derived from the flower of life.