The name Gnostic Serpent refers to the omnipresent, omnipotent evolutionary force of nature that is the source of all illuminations. The term Gnostic relates to the induced state of gnosis, in which higher states of consciousness are experienced. The Gnostic Serpent, similar to the concept of Kundalini, signifies the evolutionary energy in every human being that unfolds through spiritual initiation.

To elaborate more, In the mythological records of human history, serpents always played a significant role. Serpent worship and imagery were commonplace in almost every ancient culture around the world. Here are some of the commentaries:

“Serpent worship in some form has permeated nearly all parts of the earth. The serpent mounds of the American Indians; Python, the great snake of the Greeks; the sacred serpents of the Druids; the Midgard snake of Scandinavia; the Nagas of Burma, Siam, and Cambodia; the brazen serpent of the Jews; the mystic serpent of Orpheus; the snakes at the Oracle of Delphi twining themselves around the tripod upon which the Pythian priestess sat, the tripod itself being in the form of twisted serpents; the sacred serpents preserved in the Egyptian temples; the Uraeus coiled upon the foreheads of the pharaohs and priests; –all these bear witnesses to the universal veneration in which the snake was held.”In the ancient Mysteries, the serpent entwining a staff was the symbol of the physician. The serpent-wound staff of Hermes remains the emblem of the medical profession. Among nearly all these ancient peoples the serpent was accepted as the symbol of wisdom or salvation. The antipathy which Christendom feels towards the snake is based upon the little-understood allegory of the Garden of Eden. The serpent is true to the principle of wisdom, for it tempts man to the knowledge of himself. Therefore the knowledge of self resulted from man’s disobedience to the Demiurgus, Jehovah. How the serpent came to be in the garden of the Lord after God had declared that all creatures which He had made during the six days of creation were good has not been satisfactorily answered by the interpreters of Scripture. The tree that grows in the midst of the garden is the spinal fire; the knowledge of the use of that spinal fire is the gift of the great serpent. Notwithstanding statements to the contrary, the serpent is the symbol and prototype of the Universal Savior, who redeems the worlds by giving creation the knowledge of itself and the realization of good and evil. If this be not so, why did Moses raise a brazen serpent upon a cross in the wilderness that all who looked upon it might be saved from the sting of the lesser snakes? Was not the brazen serpent a prophecy of the crucified Man to come? If the serpent be only a thing of evil, why did Christ instruct His disciples to be as wise as serpents.

― Manly P. Hall, The Secret Teachings of All Ages 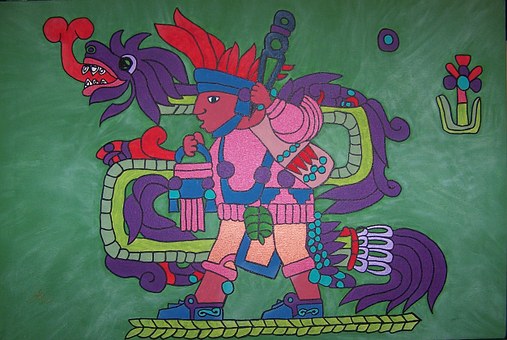 “The Rainbow was associated with a cosmic serpent in African, Indian, Asian, and Australian traditions—the snake itself is a major symbol of axial and ascensional powers. It appears nearly everywhere as a magico-religious link between the underworld and earth, and in imagery is sometimes given celestial symbolism by the addition of wings or feathers. The most notable example of this is the Aztec god Quetzalcoatl, a plumed serpent.”

“In the Hermetic Asclepian temples, healing was always performed while the healers were surrounded by serpents. In all mythological language, the snake is an emblem of immortality. The shedding of its skin makes the serpent a symbol for rebirth and renewal in all cultures. … The ancient Rishis in India were said to gain knowledge from the Nagas, which are huge serpents. Buddha himself was taught and protected by a Naga. Quetzalcoatl, a winged serpent, imparted knowledge to the ancient Aztecs. Egypt especially is flooded with depictions of winged serpents. In the Hieroglyphic language, the symbol for Thoth and Hermes takes the form of a staff, a caduceus, made up of two intertwined serpents. In Egypt, the serpent permeated nearly all facets of divinity.”

“Among the Aboriginals of Australia, the most widespread of mythic beliefs has to do with a gigantic rainbow serpent. … He (sometimes she) is also the source of magical quartz crystals known as Kimba from which the medicine man derives his own power.”

-Balaji Munkdar, The Cult of the Serpent

“The auric body of a snake is one of the most remarkable sights that the clairvoyant will ever see, and the secrets concealed within its aura demonstrate why the serpent is the symbol of wisdom among so many nations.”

― Manly P. Hall, Melchizedek and the Mystery of Fire

“The serpent is a symbol found everywhere in the Greek archaic religious record as well as the Egyptian. The depiction of the snake refers to ‘earth energy’ or, in the words of John Chang, ‘yin power’ (yin chi rising from the earth). Certain researchers have purposed the theory that the chakras of Eastern mysticism are no more than a network of ‘standing waves’ in the field of yin energy that surrounds and pervades us. … All the images [of snake coiling up] refer to the ascension of earth energy.”

― Kosta Danaos, The Magus of Java

“The serpent shows the way to hidden things.”