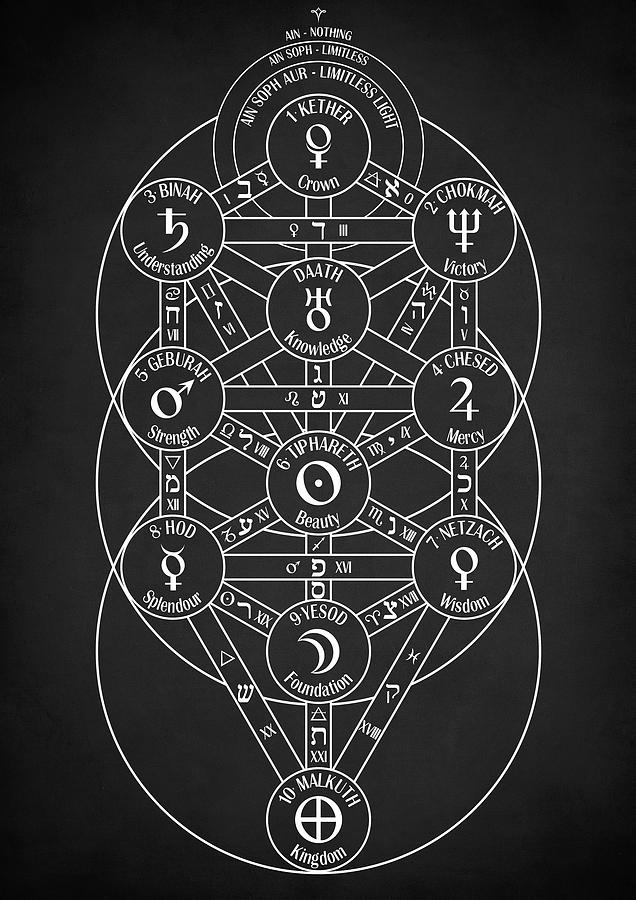 The Tree of Life is a tool used to categorize and organize various mystical concepts and is central to the teachings of the Kabbalah. At its most simple level, it is composed of ten spheres, or emanations called sephiroth (sing. “sephira”) which are connected by twenty-two paths. The sephiroth are represented by the planets and the paths by the characters of the Hebrew alphabet, which are subdivided by the five elements, the seven classical planets, and the twelve signs of the Zodiac.

Within the western magical tradition, the Tree is used as a kind of conceptual filing cabinet. Each sephira and path is assigned various ideas, such as gods, cards of the Tarot, astrological planets and signs, elements, etc. Within Thelema, the seminal book which defines all these correspondences is Liber 777 by Aleister Crowley, although there have been other influential writers on the topic, including Israel Regardie and Eliphas Levi.[1]

The Tree of Life is mentioned in the Bible as a tree in the Garden of Eden whose fruit imparts eternal life (Gen. 3:22–24). But this symbol is also present in many cultures under different names and similar meanings. H. P. Blavatsky wrote:

Trees of Life. From the highest antiquity trees were connected with the gods and mystical forces in nature. Every nation had its sacred tree, with its peculiar characteristics and attributes based on natural, and also occasionally on occult properties, as expounded in the esoteric teachings. Thus the peepul or Âshvattha of India, the abode of Pitris (elementals in fact) of a lower order, became the Bo-tree or ficus religiosa of the Buddhists the world over, since Gautama Buddha reached the highest knowledge and Nirvâna under such a tree. The ash tree, Yggdrasil, is the world-tree of the Norsemen or Scandinavians. The banyan tree is the symbol of spirit and matter, descending to the earth, striking root, and then re-ascending heavenward again. The triple-leaved palâsa is a symbol of the triple essence in the Universe–Spirit, Soul, Matter. The dark cypress was the world-trek of Mexico, and is now with the Christians and Mahomedans the emblem of death, of peace and rest. The fir was held sacred in Egypt, and its cone was carried in religious processions, though now it has almost disappeared from the land of the mummies; so also was the sycamore, the tamarisk, the palm and the vine. The sycamore was the Tree of Life in Egypt, and also in Assyria. It was sacred to Hathor at Heliopolis; and is now sacred in the same place to the Virgin Mary. Its juice was precious by virtue of its occult powers, as the Soma is with Brahmans, and Haoma with the Parsis. “The fruit and sap of the Tree of Life bestow immortality.” A large volume might be written upon these sacred trees of antiquity, the reverence for some of which has survived to this day, without exhausting the subject.[2]

Kabbalists believe the Tree of Life to be a diagrammatic representation of the process by which the Universe came into being. On the Tree of Life, the beginning of the Universe is placed at a space above the first Sephirah, named Kether (“crown” in English). It is not always pictured in reproductions of the Tree of Life, but is referred to universally as Ain Soph Aur (Ain – Without, Soph – End, Aur – Light). To the Kabbalists, it symbolizes that point beyond which our comprehension of the origins of Being cannot go; it is considered to be an infinite nothingness out of which the first ‘thing’ (thought of in science and the Kabbalah to be energy) exploded to create a Universe of multiple things.[3][4] Kabbalists also do not envision time and space as pre-existing, and place them at the next three stages on the Tree of Life. First is Kether, or the Crown in English, which is thought of as the product of the contraction of Ain Soph Aur into a singularity of infinite energy or limitless light. In the Kabbalah, it is the primordial energy out of which all things are created. The next stage is Chokmah, or Wisdom, which is considered to be a stage at which the infinitely hot and contracted singularity expanded forth into space and time. It is often thought of as pure dynamic energy of an infinite intensity forever propelled forth at a speed faster than light. Next comes Binah, or Understanding, which is thought of as the primordial feminine energy, the Supernal Mother of the Universe which receives the energy of Chokmah, cooling and nourishing it into the multitudinous forms present throughout the whole cosmos.[5] It is also seen as the beginning of Time itself.

Numbers are very important to Kabbalists, and the Hebrew letters of the alphabet also have a numerical value for the Kabbalists. Each stage of the emanation of the Universe on the Tree of Life is numbered meaningfully from one, or the Sephirah of Kether to ten, or the Sephirah of Malkuth. The nature of each number is thought to express the nature of its Sephirah. [6]

The first three Sephiroth, called the Supernal Sephiroth, are considered to be the primordial energies of the Universe. The next stages of evolution on the Tree of Life are considered to exist beyond a space on the tree, called the Abyss, between the Supernals and the other Sephiroth, because their levels of being are so distinct from each other that they appear to exist in two totally different realities. The Supernal Sephiroth exist on a plane of divine energy. This is why another correspondence for Binah is the idea of suffering, because the Supernal Maternal energy gives birth to a world that is inherently excluded from that Divine Union. After Binah, the Universe gets down to the business of building the materials it will need to fulfill its evolution, and creating new combinations of those materials until it is so dense that, by the stage of Malkuth, the initial pure limitless energy has ‘solidified’ into the physical Universe. Since its energies are the basis of all Creation, the Tree of Life can potentially be applied to any area of life, especially the inner world of Man, from the subconscious all the way to what Kabbalists call the higher self.

There are two paths upon the Tree of Life, each presenting one aspect of the practical kabbalistic work. Utilmately the distinction between these paths is false, however it is useful for practical reasons to make this distinction. The two paths are the way of the Sword and the way of the Serpent.
The sword represents the downward path of the Divine as it manifests upon the earth. This is the way of creation. Upon the path of the sword a student learns about ritual, morality, magick, and other such things. The path of the Sword has particular resonance with the Pillar of Severity.
The serpent represents the upward path of material existence reaching back up towards its divine origins. This is the way of return. Upon the path of the Serpent a student learns about meditation, personal growth, and the quest for knowledge and understanding. The path of the Serpent has particular resonance with the pillar of Mercy.

The path of the sword is the Way of Manifestation; it is the path of magick, ritual and religion, which seeks to draw down the power of the divine and to manifest it upon the earth. The ultimate goal of the Way of the Sword is, perhaps, best expressed in the descent of the New Jerusalem at the end of the biblical book of revelations – the perfection of material existence. On the Path of the Sword the aspirant does not seek to escape from the suffering of the world and attain entrance to immaterial heaven, but rather to create heaven on earth.

All morality and exoteric religion belong to the Way of the Sword, as their aim is to manifest and ideal or to manifest the characteristics of some God-Form on earth through the obedience and devotion of worshippers.

Magick, in this sense, does not describe a specifically supernatural event, but rather the art of ‘causing change to occur in conformity with the Will’; this Will being the higher nature of the operator, and not simply whims and egotistical desires. ‘Pure Will, un-assuaged in the lust for results, is in every way perfect’. The purpose of Magick is the material expression of the higher nature of humanity.

The Way of the Sword is in many ways a masculine path (in reference to the divine masculine present in both men and women), concerning itself largely with works of dominion.

The way of the serpent is the way of gnosis, mysticism and self-transformation. It is known as the way of return as it is by this path that the individual returns to their original spiritual nature. It is the journey inwards to find the true and immortal Self. The work of this path is primarily solitary and meditative, requiring one to step beyond the boundaries of ordinary consciousness and consensus reality.

The 22 Hebrew Letters (The Paths)