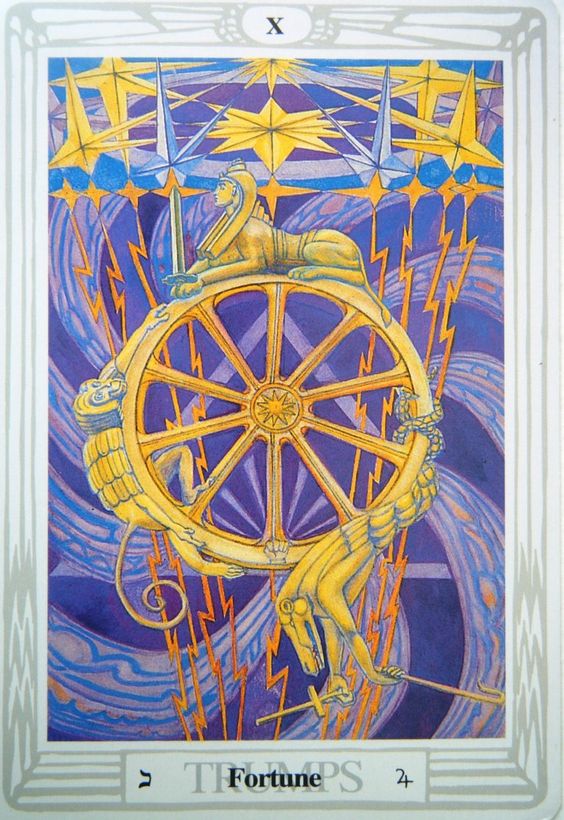 The Hermit by Crowley & Harris

Saturn, Uranus, Neptun and Pluto – the masters of Karma

Element: Fire
Number: 10 as symbol for perfection, the cross sum is 1 (the Magician)

In the midst of energy whirlwinds and lightning bolts turn the ten-spoked Wheel of Fortune. It is a symbol of wholeness, in constant motion yet unchanging in its completeness.

The three figures – sphinx, ape and crocodile – represent three Egyptian gods. The sphinx unifies the four magic virtues; knowledge, will, daring and silence. Wisdom arises through the unification of animal instincts and intuitive intellectual powers. The sword in the sphinx’s paw testifies to incorruptible powers of discrimination and the ability to think clearly.

The ape on the left side of the wheel symbolizes flexibility (see the Magus). It looks as if he is the one who keeps the wheel in constant motion.

The crocodile represents the god of creativity (see The Fool). It holds two tools in its hands. In the right is the Egyptian Ankh, symbol of life; every creative act brings something to life. The staff with the hook at the end is a symbol of the possibility we have to forge our own luck. We can recognize and attract good opportunities and make use of them.

The center of the wheel represents the Sun, origin and unification of all creative energies. It is also a symbol of awareness, realization, enlightenment. In the Sun is the absolute center, the center of the cyclone which, despite the constant movement at the periphery, remains still and unchanged. This is the inner seed, the witness who remains untouched by the ups and downs of duality; joy and sadness, hope and fear.

The Hermit by Ina Audeirieth