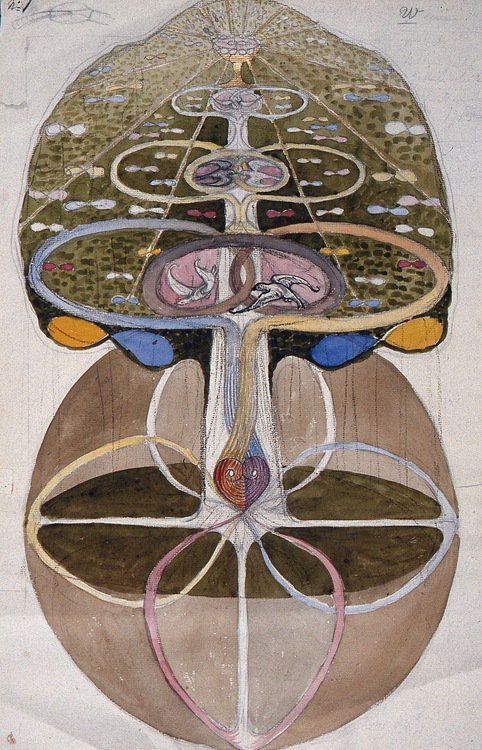 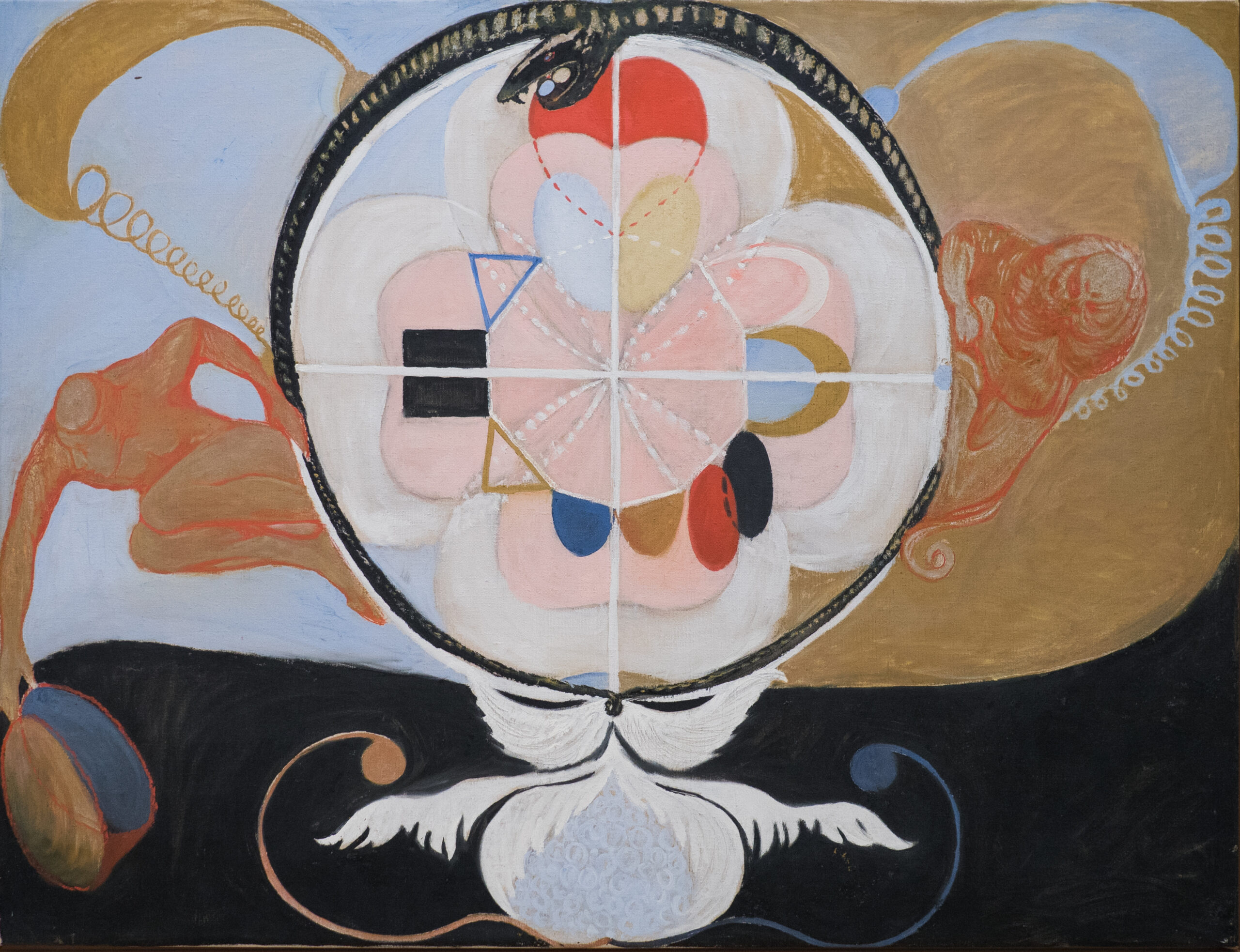 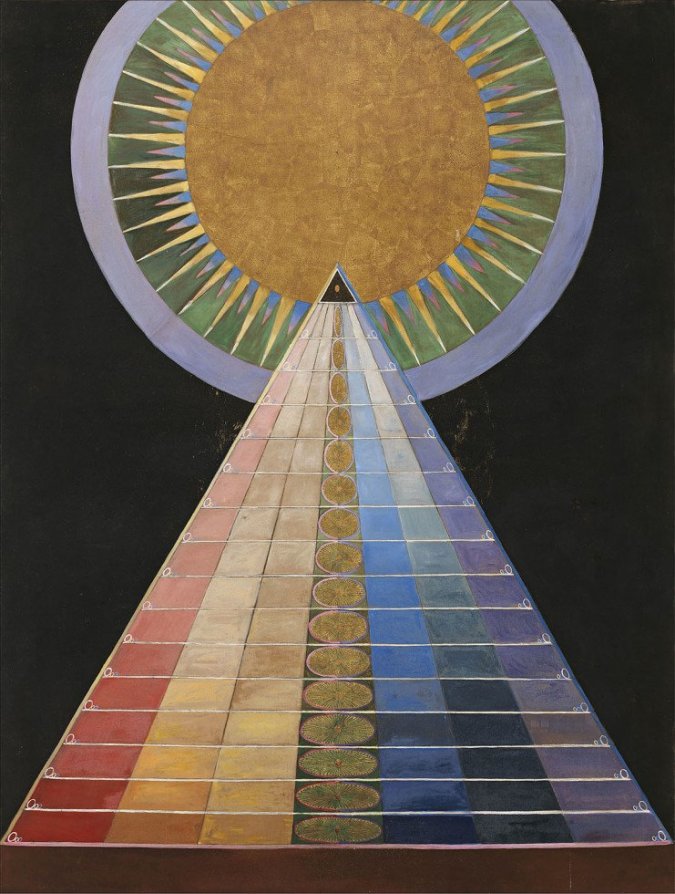 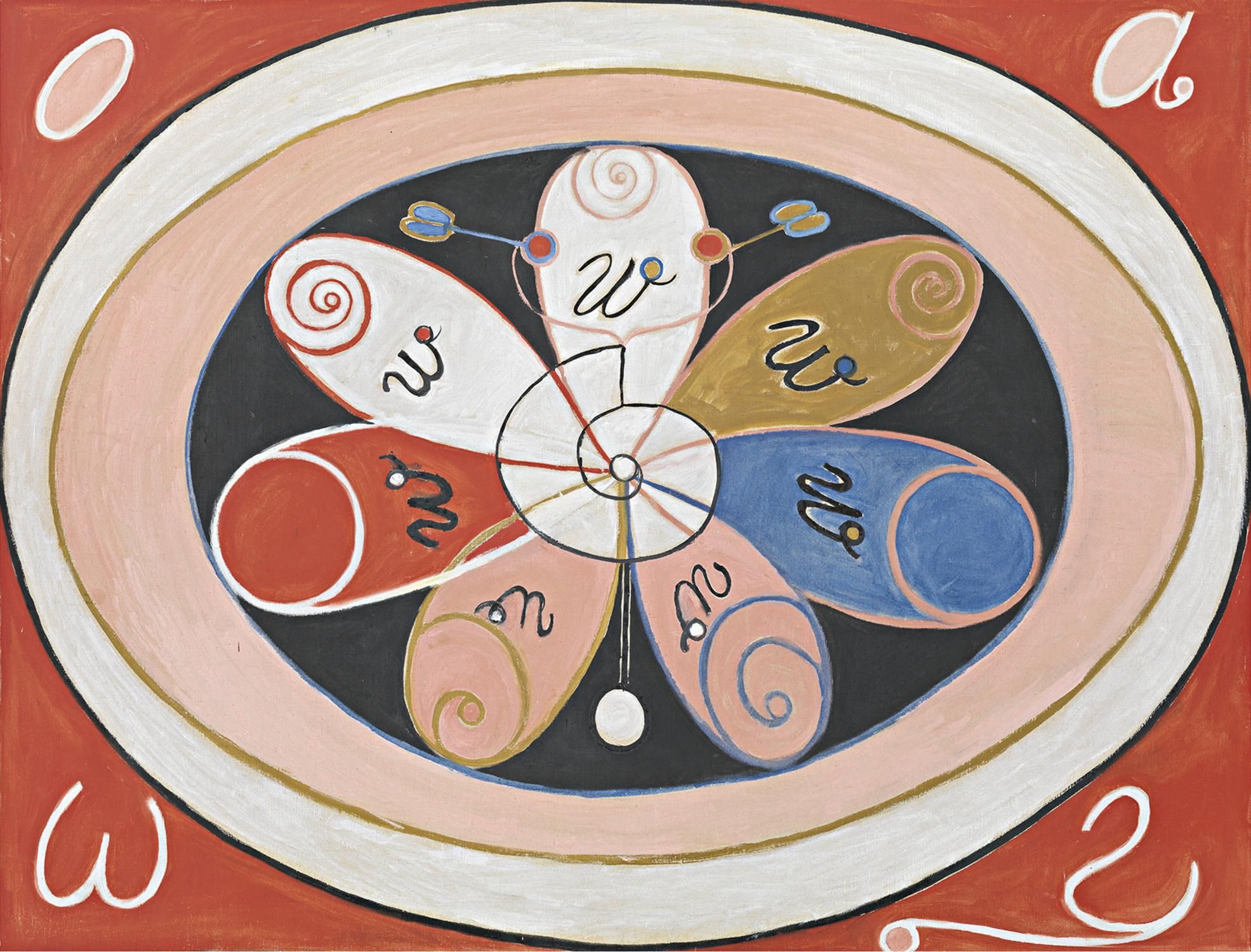 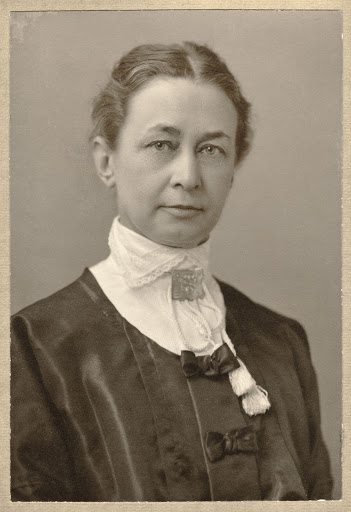 Hilma af Klint (1862-1944) grew up in idyllic rural Sweden and it is considered that nature, in addition to a keen interest in mathematics, was a crucial influence on her later paintings. The sudden death of her sister also impacted Hilma’s preoccupation with spirituality, another element associated with the artist’s body of work.

Hilma’s talent for visual art soon became clear and she was able to enroll in Stockholm’s Royal Academy of Fine Arts (1882), an educational opportunity which women in many European countries were still denied.  At first Hilma concentrated on landscapes and portraiture for her studies. However she had already developed an interest in theosophy, a mystical philosophy concerning the mysteries of life and nature.  Significantly this was a semi-religious and philosophical movement that did not discriminate against women and was in fact founded by a woman, Helena Petrovna Blavatsky.

The ideas and beliefs incorporated within this movement were simultaneously inspiring male abstract pioneers such as Mondrian, Malevich and Kandinsky and would have a profound influence over the work of these artists, and also Hilma’s too.Hilma became involved with a group of fellow female artist known as ‘The Five’ who shared her interest in mysticism.  Together they worked on an artistic philosophy which centered on knowledge deemed beyond the senses, focusing on spirituality.  In 1896, Hilma began a series of ‘automatic drawings’ believed to be driven by forces beyond the natural and human world. Such work encompassed much of the geometric symbolism that the artist would later refer to.  Hilma later gained employment as a draughtswoman, another aspect of her life that would be reflected in her ensuing pioneering artwork.

n 1906, Hilma began creating abstract paintings in a series entitled ‘Primordial Chaos’. From this point onward Hilma produced a body of work encompassing and exploring the ideas of her day, from scientific discoveries of electromagnetic fields to musical oscillations, from prisms of light to the occult. The artist still studied the theosophical texts, drawing on a wealth of ideas which she translated into a visual philosophy aiming to depict a higher world beyond the everyday. Hilma created a large and pioneering body of work that incorporated a complex and new artistic language, within a movement that would be regarded as changing  Western art forever.

Hilma’s ability to create as a woman artist was shaped by certain circumstances. The first is that she was from a fairly well off family which enabled her to pursue her artistic goals. The second is that she was allowed an art education, unlike so many other women artists who were systematically denied access to academies and art schools. Thirdly, Hilma was involved with a female-friendly philosophical stance, which enabled her to deeply explore particular theories, from which otherwise she may have been excluded. Fourthly, the artist was able to develop her ideas within a group of fellow women artists. Even if female artists could access art schools, they were seldom included in less formal groupings of artists there, unlike men who often formed ‘boys clubs’, such as the Pre-Raphaelites for example,  in which they could support each other to cement their artistic practices and goals.

Hilma died in 1944, without ever showing her work in an exhibition. In turn, her hugely pioneering artistic achievements have never been properly recognised. The role of abstraction in Western art history is never the less, one of incredible significance. Hilma’s work is now believed to predate the work of Kandinsky, an artist usually credited with the introduction of abstract art. However, even today the work of Hilma is seldom referenced in the same breath as the innovative male abstract artists of the era.