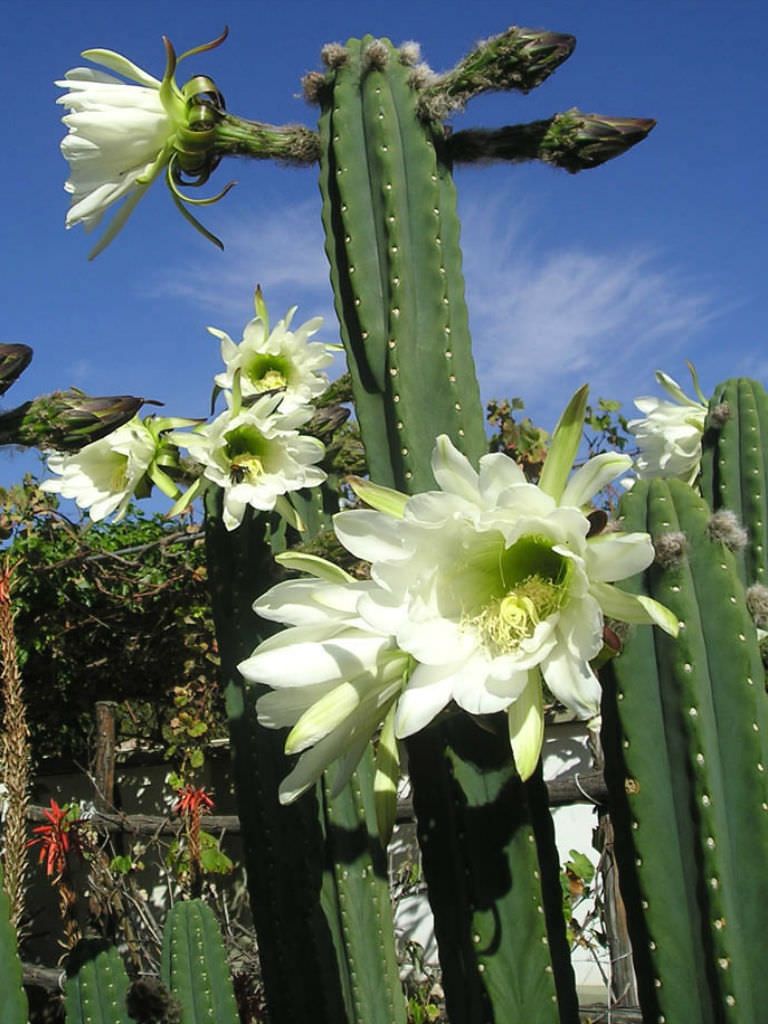 Echinopsis pachanoi has a long history of being used in Andean traditional medicine. Archeological studies have found evidence of use going back two thousand years, to Moche culture. [1] Although Roman Catholic church authorities after the Spanish conquest attempted to suppress its use,[2] this failed, as shown by the Christian element in the common name “San Pedro cactus” – Saint Peter cactus. The name is attributed to the belief that just as St Peter holds the keys to heaven, the effects of the cactus allow users “to reach heaven while still on earth.”[3]

In 1888 Louis Lewin published in Berlin the first chemical paper on peyotl (Lewin 1888). This caused a sensation, as entheogenic plants had hitherto been unknown to European scientists. Lewin reported the isolation of an alkaloid, which he named Anhalonin (today considered to have been likely a mixture of alkaloids); this was the first published report of alkaloids from the Cactaceae. Lewin had obtained dried peyotl from the u.s. pharmaceutical firm Parke, Davis and Co. during a trip to the U.S. in 1887. Other scientists became interested in peyotl, and phytochemical work on the plant culminated in 1895 and 1896, when German chemist Arthur Heffter isolated four pure alkaloids from the plant, one of which he named Mezcalin, the others being Anhalonin, Anhalonidin and Lophophorin; he also described the isolation of Pellotin (or Peyotlin) from Lophophora Diffusa. Heffter was unable to detect visionary activity of his isolated alkaloids in animal experiments, which led him to employ the “Heffter Technique”, testing the alkaloids on himself, in an heroic series of self-experiments, which he summarised as follows [7]:

The conclusive experiment took place on 23 November 1897, and this became the world’s first Mezcalin “trip” and the first entheogenic experiment with a purified compound. [7]

Mescaline has been found in 12 species of Trichocereus, the highest concentration in T. peruvianus. Trace amounts of mescaline occur in other Cactaceae, including Stetsonia coryne, Pelecyphora aselliformis and Opuntia spinosor.[7]

The effective dose for mescaline is 200–500 mg, equivalent to about 5 g of dried peyote. [3] Following oral ingestion, the effects of mescaline will begin in about 1-2 hours and last about 8 to 10 hours.[2] When combined with appropriate set and setting, Mescaline is reported to trigger states of deep introspection and insight that have been described as being of a metaphysical or spiritual nature. At times, these can be accompanied by rich visual or auditory effects (see synesthesia).

San Pedro has a rich history of sacred shamanic use. It has been used to treat various ailments such as cancer, diabetes, hepatitis, fever, paralysis, problems with joints, high blood pressure, cardiac diseases, burning kidneys, and bladder to name a few. San Pedro is also a powerful antimicrobial that inhibits 18 or more penicillin-resistant bacteria.

These scared cacti like other indigenous entheogens are miracle plants. San Pedro has also been noted to cure drug addiction and alcoholism. Why then have these plants not been integrated into Western medicine? San Pedro at the very least deserves more attention from the scientific and psycho-medical communities.