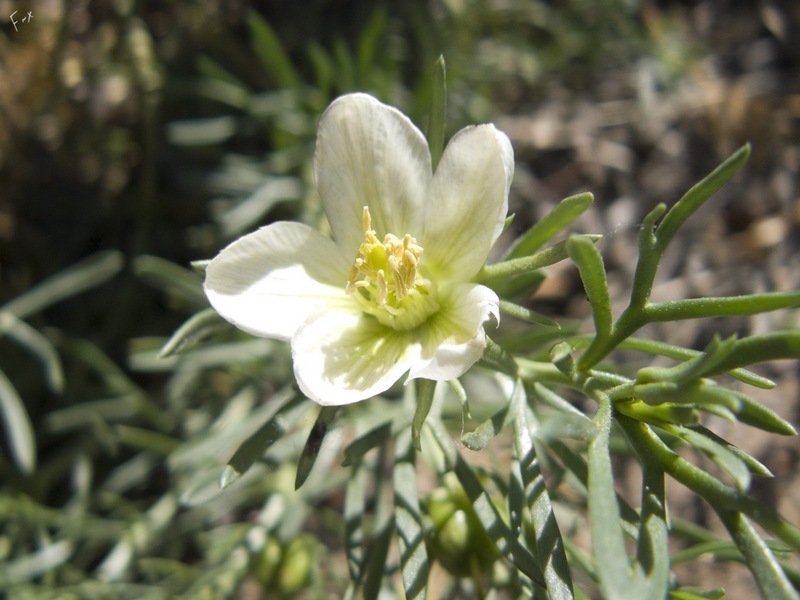 Peganum harmala, commonly called wild rue,[1] Syrian rue,[1] African rue,[1] esfand,[2] or harmel,[1] (among other similar pronunciations and spellings), is a perennial, herbaceous plant, with a woody underground root-stock, of the family Nitrariaceae, usually growing in saline soils in temperate desert and Mediterranean regions. Its common English-language name came about because of a resemblance to rue (which is not related). Because eating it can cause livestock to sicken or die, it is considered a noxious weed in a number of countries. It has become an invasive species in some regions of the western United States. The plant is popular in Middle Eastern and north African folk medicine. The alkaloids the plant, including the seeds, contains are hallucinogenic,[2] possibly due to a monoamine oxidase inhibitor,[3] thus it is sold in the West for recreational drug use.

It is known in as اسپند in Farsi (Persian), which is transliterated as espand,[2] or ispand[13] but may also be pronounced or transliterated as “sepand”, “sipand”, “sifand”, “esfand”, “isfand”, “aspand”, or “esphand” depending on source or dialect. The Persian word “اسپند” is also the name of the last month of the year, approximately March, in the traditional Persian calendar.[4][5] It is derived from Middle Persian “spand”, which is thought, along with the English word “spinach”, to be ultimately derived from Proto-Iranian *spanta-, “holy” (compare Avestan , spəṇta, “holy”, and Middle Persian “spenāg”, “holy”), itself thought to be ultimately derived from Proto-Indo-European *ḱwen-.[6]

The Avesta, an ancient Iranian religious text in part attributed to Zoroaster (or Zarathustra) was composed sometime during the first millennium B.C. Tradition has it Zoroaster lived during the fifrh and sixth centuries ofthe pre-Christian era, but most of the text of the Avesta is considerably more recent, ‘though grounded in traditions ant edating the life of the prophet Zoroaster . Three chapters of the Avesta, Yasna 9, 1o and 11, collectively known as the Hom Yasht, refer repeatedly to a sacred inebriating plant known as Haoma,which is etymologically (and possibly botanically, at least originally) identical to theAryan (the Iranians also descend from the Aryans) Soma of India (see Chapter 6, especially Note II). The Avestan scholar]. Darmesteter considered the Hom Yasht to be a later interpolation to the text of the Avesta probably dating from B.C. ’40 to A.D. 50 , and some contemporary scholars consider the Hom Yashtto have been composed during the Hellenistic era, from the sixth to the fourth centuries B.C. [12].

Named in Egypt bésa or besasa, this term poses harmel in direct association with the god Bes, a deity of the Pharaonic Pantheon. Bes was mainly a good fortune deity of the domestic environment and protector of women giving birth, newborns, infants, and people sleeping. He was also the divinity of music and dance and was associated with sexual pleasures, libertine love, and, later, with wine. As protector of dreams, he carried out important oracular functions held during the Roman period at Abydos. In Ptolemaic times incubation rooms sprang up, called “rooms of Bes,” used for rituals of cure through dreams. Its association with wine is late, and we know a reference of the 3rd century BC about the existence of wine vessels called besiakon, on which this deity was depicted. We do not know what kind of drink was poured from these vases, but the suspicion arises that it was a particular drink, in which some intoxicant ingredient was added, perhaps the “plant of Bes,” harmel. Bes’ association with this plant, with dreams, with sexual pleasures, and with Hathor, goddess of love and intoxication, would justify this supposition.[9]

Peganum harmala, commonly called esfand (native name), syrian rue, is a plant native to the eastern Iranian region west to India. It has also spread invasively throughout Arizona, California, Montana, Nevada, Oregon, Texas and Washington. The plant itself produces seeds which contain harmala alkaloids and is easily accessible and legal to purchase online through the use of google. Powdered syrian rue seeds act as a reversible inhibitor of MAO-A (RIMA) at doses of 2 – 5g.[10]

Syrian rue seeds contain several different harmala alkaloids at slightly varying percentages. Only some are monoamine oxidase A inhibitors. In one study, total harmala alkaloids were at least 5.9% of dried weight.

The 10% concentration of beta-carboline alkaloids in the seeds of harmel recently found in wild plants in the Toledo area, in Spain, is a huge amount and makes this plant the most powerful plant source MAO-reversible inhibitor. According to average estimates, the seeds of harmel are 10 times more powerful than the ayahuasca vine.[9]

A second important group of compounds are quinazoline alkaloids, the most abundant of which is vasicine and which are responsible for the uterotonic effect that justifies the traditional use as a facilitator of childbirth and as an abortifacient.

Sometimes cases of poisoning with harmel happen in the traditional context, due to over-dosage or inappropriate assumptions. Fatal cases are rare and occur especially among children, because of the habit of intensely fumigating the air in the room where the newborns dwell, in order to protect them from evil spirits. Other frequent poisonings are due to attempts at abortion. A curious fact concerns the main type of visual hallucination that accompanies the intoxications induced by over-dosage, which consists in seeing flames in the visual field. This has been reported many times by the intoxicated people, who saw doctors and walls of first-aid centers shrouded in flames.[9]

For several decades, beta-carboline alkaloids, especially the harmala alkaloids, have been studied as promising anti-cancer agents. Harmine appears to be one of the most interesting molecules in this regard. Its properties of inducing apoptosis (“suicide”) in malignant cells have been ascertained in laboratory studies and as such give credibility to the highly acclaimed anti-cancer properties of both ayahuasca and harmel. Two interesting case reports on the treatment of cancer with Peganum harmala seed extracts have recently been described by an Israeli research team directed by Ephraim Lansky. The first case involved a young 29-year-old man suffering from a highly malignant brain tumor (oligoastrocytome). After numerous surgical excisions without success, the young man decided to switch to alternative therapies with medicinal herbs (including cannabis oil), a ketogenic diet, and harmel seeds. After four years of these therapies and two years of continuous administration of harmel seeds, the patient achieved complete remission from the tumor.[9]

In the second case, an ovarian carcinoma in a 53-year-old woman was treated in a very original way—that is by spreading the harmel seed oil on the skin at the height of the tumor and where the transdermal migration of the active ingredient harmine toward the cancer had been facilitated by infrared light. Once the cancer was reached, harmine induced apoptosis of the malignant cells. There is no easy cure for cancer, and we shouldn’t expect Peganum harmala to necessarily be one. But given its wide history of use and its fascinating association with healing and spiritual life, we certainly have more to learn from the Bes’ “good fortune” plant.[9]

Drug use in pregnancy

Peganum harmala can induce miscarriage. It has traditionally been used as an abortifacient agent in Morocco, North Africa, and the Middle East.[11] It is believed that quinazoline alkaloids such as vasicine and vasicinone are responsible for the abortifacient activity of the plant.[10]